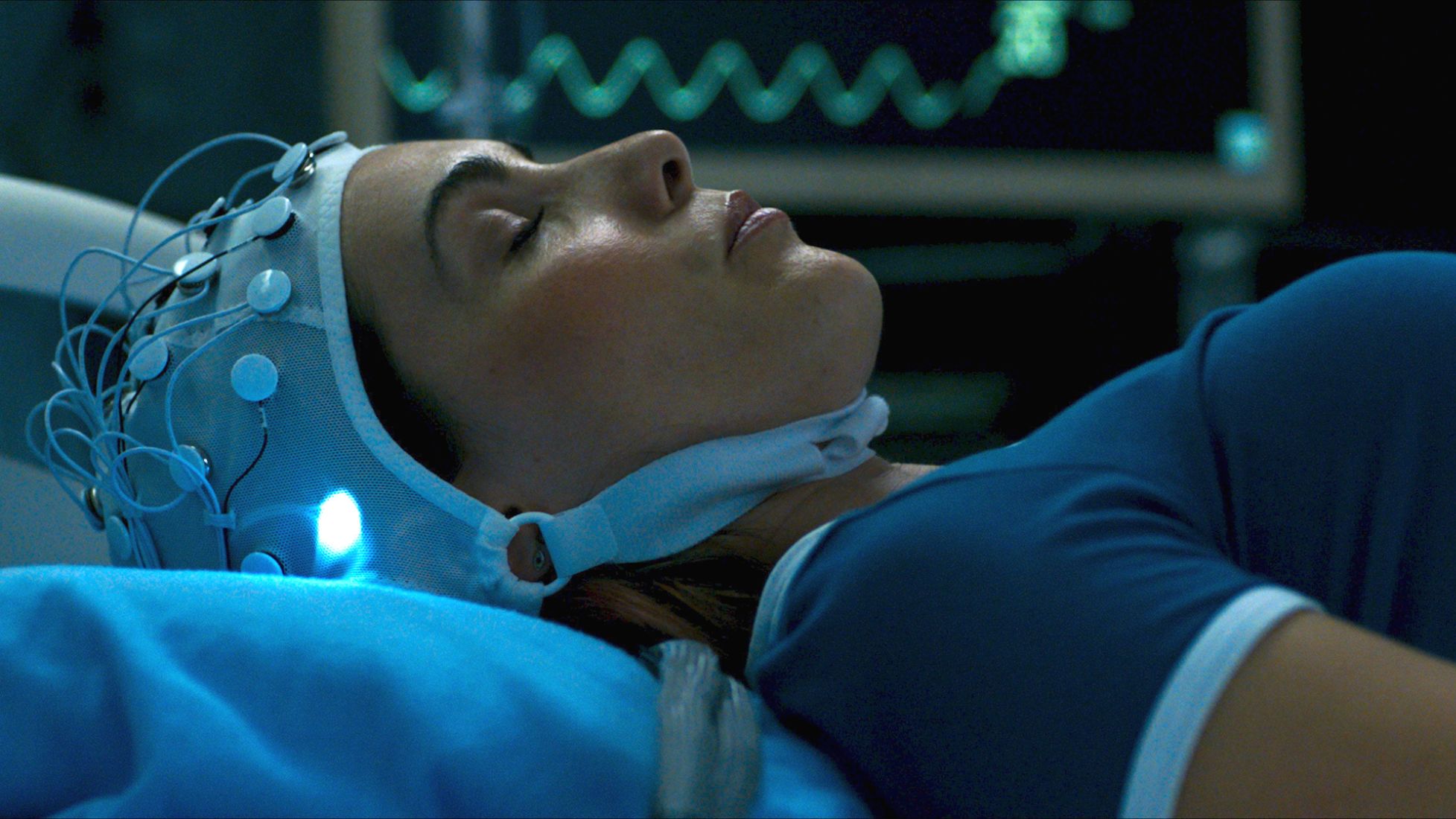 Neill Blomkamp’s sci-fi work finds its chief pleasures as a cinema of the hyperreal. Aliens, robots, and impossibly cool implements of destruction exist fifteen minutes into the future, covered in the grime and grit and chipped imperfection of used objects, in alternate worlds as beholden to the violence of material inequity as our own. Anderson Cooper (playing himself) reveals speculative history as breaking news coverage. The fantastically imaginary becomes physically palpable. Blomkamp’s chief aesthetic guideposts are visual media’s pinnacles of “you are there” immediacy: cinema verité, video games, documentary. His cinema is vividly externalized, rife with world-building, sprawling in scope, and rooted in a firm sense of the material.

Implication that Demonic may not play to his strengths comes with the opening scene. In an economically cut series of crawling, low-angle handheld shots, uncannily perfect symmetrical compositions, and other dream sequence clichés, a woman (Carly Pope) wanders through an overgrown field and into a derelict sanatorium where she meets her mother (Nathalie Boltt, in old-age glamours) and gets a spooky surprise. While setting and visual language superficially recall Kiyoshi Kurosawa’s J-horror classic Cure, Blomkamp lacks the impressionist technique or comfort with ambiguity to replicate Kurosawa’s unsettling representational blurring of dreams and “reality.” Long before this short sequence ends in predictable, unscary fashion, it undercuts its own tension by telegraphing “unreality” to the audience by dully prosaic means that any casual horror viewer who’s seen a nightmare sequence could deem rote. Blomkamp, one suspects, does not possess the same imagination for interior worlds he’s exhibited for external.

Demonic largely proves this thesis correct. Pope’s character (also named Carly) is soon contacted by a biomedical firm looking to put her in contact with her estranged, comatose, life-sentence-serving mother via unconventional means: a simulated consciousness program that allows two people hooked up to a brainwave-reading apparatus to communicate in a virtual space. Visually and thematically, this Paprika-like invention is far and away the film’s brightest (and most characteristically hyperreal) idea: inside the simulation, Carly and mom “meet” as photorealistic digital avatars in a VR-like recreation of their childhood home, a site of shared memories and shared trauma. As they do, hospital techs watch and listen to their mutual dream on monitors with an isometric UI à la The Sims. This uncanny imagery and evocative concept speak to Blomkamp’s greatest strengths and most captivating idiosyncrasies: they conceive of a liminal space where interior and exterior realities collide, visualizing the notion that video games and interactive software may have unique access to whole layers of human consciousness that conventional cinema does not.

Such scenes and their more interesting implications quickly become background noise. Between VR therapy sessions, Carly exchanges stupefyingly expository dialogue with her childhood friends, identifiable as such via the Tommy Wiseau method of establishing character relationships: declaring it repeatedly. (Kandyse McClure’s character helpfully reminds Carly they’re “BFFs” more than enough times to recall The Room, and has few other identifiable traits besides.) “True” dreams recur throughout the film, in stark contrast with the lucid Unity-animated VR sequences, and each one of these is as dully derivative as the opening; they only highlight Blomkamp’s superior skill in staging VR to traditional cinematic expressionism.

Once Carly starts piecing together the supernatural secret behind her mother’s dark past—having read the film’s title, one can probably guess what that is—more inventive sci-fi elements go out the window as Demonic commits fully to being yet another possession thriller of the sort cranked out roughly every other month since December of 1973. As one hackneyed plot device follows another, cheap “scares” fail to land and characters fail to deepen or distinguish themselves beyond one-dimensional doodles, Blomkamp does not exhibit anything close to the sense of interiority and psychological nuance that would make this material work. Even the lumbering practical-effects demon just isn’t wild and unpredictable enough to be spooky, let alone shocking. Blomkamp has shown he can do body horror, of which there isn’t nearly enough here.

There’s one more recognizably, tantalizingly Blomkampian subplot about a high-tech demon-hunting Vatican black ops unit (yes) that hovers around the film’s periphery, and this too ends up going approximately nowhere. Maybe it’s from highly visible, COVID-imposed restrictions on Demonic’s scope and budget that we get a lifeless Exorcist knockoff instead of Neill Blomkamp’s Blade meets Paprika, or maybe it was his conscious choice to try out a very specific genre that incorporates few of his stylistic trademarks and thematic obsessions; either way it’s a maddening loss. Though his attempt to pivot and invert typical narrative focus—from exterior to interior, hyperreal to surreal—is likely a noble one, the end results don’t pay off. Even at the risk of being pigeonholed, sometimes it’s not so bad to play to your strengths.

Demonic opens in theaters and digitally on Friday, August 20.