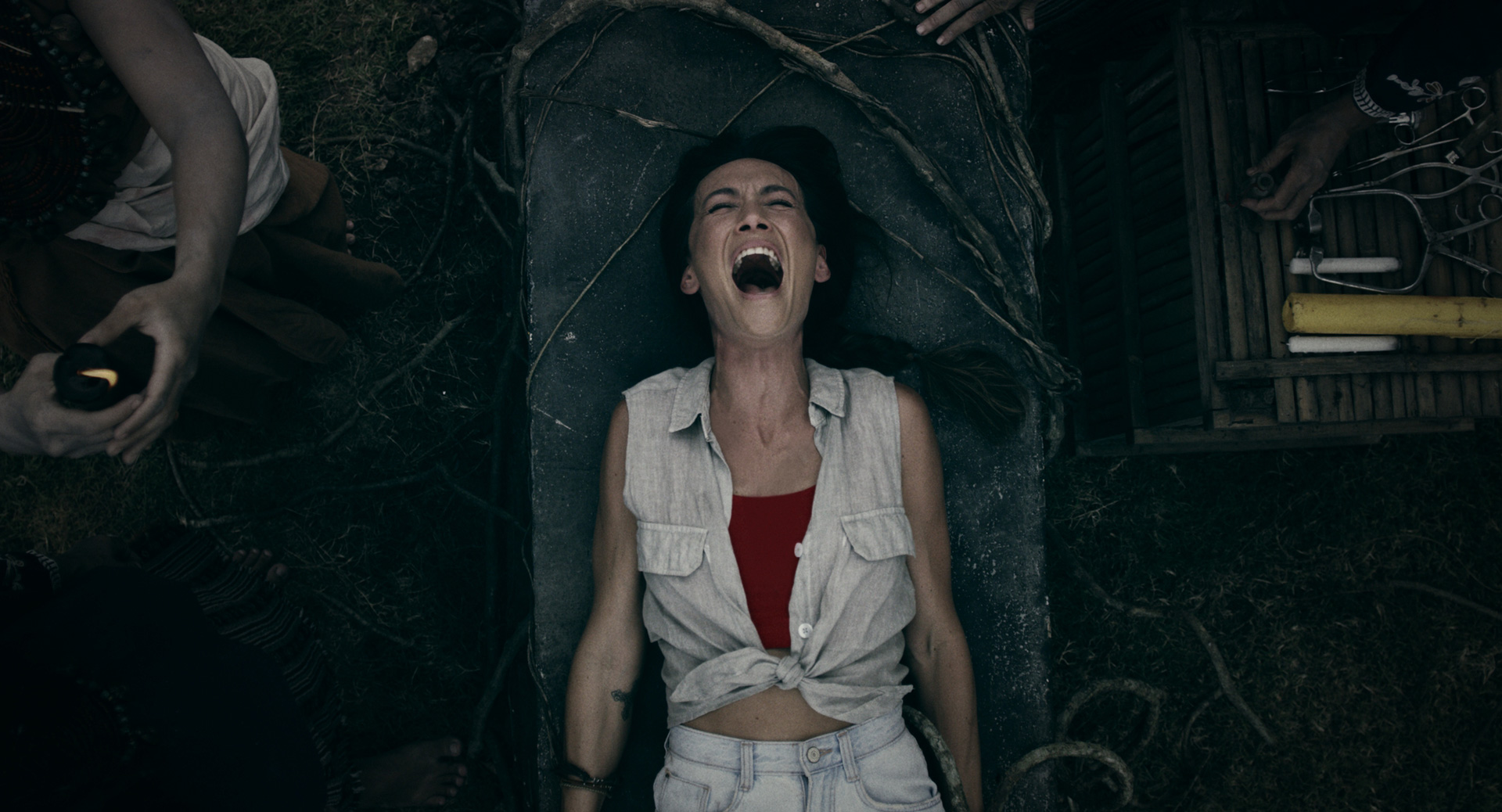 The words faith and belief have been distorted beyond recognition these past couple decades, if not longer. They used to signify a person’s innate ability to trust in the unknown (God, morality, etc.) and now they’re used to refute the known. People say they “believe” a faulty opinion that blatantly rejects empirical fact as though they have the power to disagree a proven truth from existence. They “believe” climate change isn’t real (it is). They “believe” wearing masks doesn’t combat the spread of COVID-19 (it does). They hide beyond the auspices of “faith” in order to avoid ever having to admit they’re wrong. “Wrong” no longer exists to them. And the more we allow the conversation to change into my “right” against your “right,” truth will eventually die.

It’s therefore irksome to read director Darren Lynn Bousman’s statement about his latest film Death of Me and how it deals with the power of belief because he uses the word as it’s meant to be used despite Ari Margolis, James Morley III, and David Tish’s script doing the opposite. Because here’s the thing: faith is only powerful to those with it. You can will yourself to good health because of your belief in God, but you cannot will another if they don’t also believe. That’s why people ask others to pray for them. They believe that other believers can enhance their chances of success. And it’s why non-believers scoff when believers say they have them in their prayers. You can’t force your faith upon an unwilling participant.

So while the residents of a remote island off the coast of Thailand can believe dark magic has kept them safe from harm for over two hundred years, they cannot foist that belief upon two American tourists (Maggie Q’s Christine and Luke Hemsworth’s Neil) out for a good time on their last evening before returning home. They can drug them, put them through a ritual without their consent, and lead them down a path towards oblivion, but none of it matters if they don’t adhere to the rules on which they’ve bound their faith. We may not discover what those rules are until late in the game, but we realize just how broken they’ve become the second we do. So why does its power work on non-believers anyway?

This question ensures that Death of Me will never be able to stand on its own two feet because the film’s inability to provide an answer shows that it’s playing both sides depending on what the plot needs at any given moment. It hopes we won’t notice because we’ll be too invested in the mysterious circumstances surrounding that aforementioned night for which Christine and Neil have no memory. They wake-up hungover and covered in dirt and blood, deciding to pack and rush to their ferry back to the mainland before sitting down and figuring out what happened. Without their passports, however, they’re not allowed passage. So they return to their Airbnb, fire up Neil’s camera, and witness the impossible: he snapped Christine’s neck and buried her.

That’s quite the revelation and admittedly a wild enough premise to build a strangers-in-a-strange-land narrative upon. We watch as the townspeople stare knowingly at them when not smiling as though they’re heroes. We watch Christine and Neil scramble to retrace their steps through an island gearing up for celebrations despite a “super” tsunami heading their way. And we see how everyone looks at the necklace hanging around Christine’s neck as either a harbinger of death (Kelly B. Jones’ Kanda) or symbol of salvation (Kat Ingkarat’s Madee). Even with their Airbnb host (Alex Essoe’s Samantha) helping them find a doctor and get home, however, it quickly starts to seem like they won’t be going anywhere—something that dawns on them too late for a second video to make sense.

So we’re trying to decipher two things: whether this couple will survive long enough to return to America and what exactly the ritual they performed under the influence of hallucinogens is meant to conjure. It becomes your basic genre thriller as a result with a straightforward race against the clock to escape before the time arrives for Christine to be sacrificed. But the script is anything but basic in that goal. On the contrary, Margolis, Morley, and Tish make it so convoluted that I wasn’t sure where relevance began and deflection ended. There’s commentary about technology that goes nowhere (they shouldn’t have been able to record the ritual). There’s the necklace’s mythology of healing powers that’s constantly used as a contrivance. And there’s the notion of free will.

This last one is the film’s ultimate undoing because it goes against everything that makes feasible sense within this supernatural tale. Because the protection of this island is predicated on belief, the sacrifice needs to be voluntary. As we know from the very beginning, nothing about what happens to Christine and Neil is by their choice. The people therefore “believe” it is. They “believe” that their coercive entrapment has retained the illusion of free will enough that Christine’s own declaration to the contrary is null and void. They are so emphatic about appeasing this “belief” that they’ll even try guilting her into agreeing with the utilitarian idea that her death will save hundreds. But you can’t conjure guilt in a non-believer. She doesn’t believe living will kill them.

What happens during and after the climax vacillates between faith having power (the island protecting itself with belief in the unquantifiable) and “faith” stealing power (the island using a non-believer for protection by forcing its truth upon her). Are we supposed to empathize with the island and their warped spirituality because their belief moves mountains? Or are we supposed to vilify them for turning their belief in dark magic into a presumed “truth” for anyone who dares set front on their shore? You can’t have both. You can’t have one cause an ending that feels like a ham-fisted metaphor for selfish Americans destroying the Pacific through their rejection of climate change and then the other provide a shock value epilogue as if they don’t automatically negate each other.

Death of Me hits select theaters, VOD, and Digital HD on October 2.