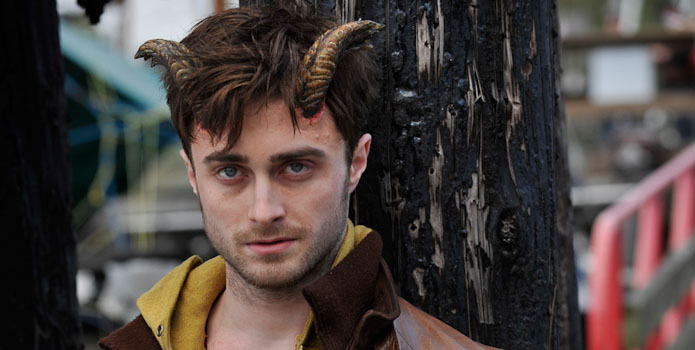 After delivering buckets of blood with Piranha 3D, director Alexandre Aja looks to be pulling back a little with his latest feature, Horns. Starring Daniel Radcliffe, who is clearly look to break away from the blockbuster world after Harry Potter, the story follows his character who, after a night of intense drinking filled with only the most fleeting of memories, awakens to find demonic-like horns growing out of his head.

We were mixed on the project out of TIFF last fall, saying in our review, “It should never be thought for a second that Horns is, not by design, a tonal mess, bouncing between brooding murder mystery, broad comedy, and romantic melodrama. The ultimate problem is that every note it hits has to be so noisy, reliably competent horror director Alexandre Aja getting lost in his own intent and influences while the film seemingly crumbles under its own narrative weight.”

Based on the novel by Joe Hill, the first teaser and poster have dropped today which only gives a small preview at the story. They can be seen below for the film also starring Juno Temple, Max Minghella, Joe Anderson, James Remar, and Kelli Garner.

“Horns,” a supernatural thriller driven by fantasy, mystery and romance, follows Ig Perrish (Radcliffe), the number one suspect for the violent rape and murder of his girlfriend, Merrin (Temple). Hungover from a night of hard drinking, Ig awakens one morning to find horns starting to grow from his own head and soon realizes their power drives people to confess their sins and give in to their most selfish and unspeakable impulses – an effective tool in his quest to discover the true circumstances of his late girlfriend’s tragedy and for exacting revenge on her killer.