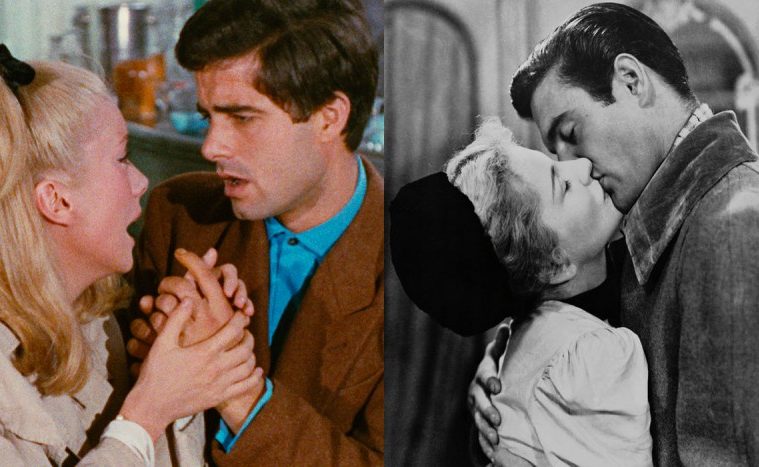 Cry Me a River: The Radical and Revolutionary Power of Melodrama

Within the first ten minutes of Nicholas Ray’s unimpeachable classic Rebel Without a Cause Jim Stark (James Dean) wails, “You’re tearing me apart!!!!!” This is not an instance where the film crescendos with an emotional breakdown, but begins. Jim Stark is a staggering portrait of apocalyptic masculine adolescence ripping apart a young body through expectations put on him by society and his own self-imposed fears that he could turn into his passive father. Jim Stark is one of the defining characters of cinematic melodrama with his unbridled emotional honesty laid bare for the world to see. He physically cannot keep himself from gnashing, wailing, and screaming in the face of emotions that bubble to the surface. Melodrama opens the lid on these reactions and rides that feeling to cinematic honesty and authenticity. Melodrama is realer than real; a hyper-stylized evocation of feelings that we’re all familiar with as human beings. Realism is phony. Heartbreak is gospel.

Which brings us to the Film Society of Lincoln Center’s globetrotting spectacular retrospective series on melodrama appropriately and inventively titled Emotion Pictures. Beginning this week and playing through January 7 are 62 films which showcase the universal languages of struggle, heartbreak, triumph, and joy spanning the world, with features from regions such as Asia (The Housemaid, Rouge, The Goddess), Africa (Cairo Station), Latin America (The Castle of Purity, Beyond Oblivion), North America (Careful, Gaslight, The Bridges of Madison County), and more.

Melodrama finds its greatest strengths in how it lenses gendered issues. The genre frequently referred to as a “women’s pictures” or “weepies” made the issues of women, queer coded individualism and men whose masculinity was in crises their focal point, which presented a picture in direct contrast to other popular genre fare at the time like creature features, westerns, and screwball comedies. No, these films were movies of the heart and they were going to wrench on that organ until there was nothing left but a pure emotional response. In the case of the Hollywood productions of old these films’ critical standing was never taken as seriously as they should have been, but now films like Bigger Than Life, Rebel Without a Cause, Letter from an Unknown Woman, and the vast work of Douglas Sirk being featured in FSLC’s melodrama series are widely considered classics of not only their genre, but cinema in general.

While melodrama works within a mode that capitalizes on both basic and complex emotions, the formal tendencies and thematic questions these movies asked was nothing short of radical and revolutionary. Through melodrama, topics like infidelity, race relations, and questions of sexuality could be reckoned with in a way that other genre pictures of the time did not offer. Douglas Sirk’s films have famously gone on to influence new queer cinema giant Todd Haynes (and fellow Emotion Pictures player Terence Davies). Haynes is perhaps our greatest melodramatist today, but where Sirk’s questions of sexuality were always shrouded in the subtextual Haynes brings homosexuality to light. Haynes’ most recent film, Carol, stands alongside the other finest melodrama works of the century like In the Mood For Love, Mulholland Drive, and Brokeback Mountain. The melodrama lives on proudly today in LGBT cinema.

The Film Society of Lincoln Center’s scope reaches far beyond the machinations of America cinema, and offers a full portrait of the melodrama as a symptom of humanity, and not just an instance of American drama. Offerings from Japan playing throughout the duration of the series like The Goddess and The Life of Oharu are portraits of complex, driven women who are tangled up in the limitations of womanhood imposed upon them by Japanese society. Other highlights of the series include Russia’s The Cranes are Flying and Insiang from the Philippines. Both are essential films which show formal grace and ingenuity tied into the emotional complexity of the women who are front and center. It would only be a slight exaggeration to say that the Film Society of Lincoln Center’s series on melodrama is the best possible curated retrospective series imaginable. It’s certainly the best that 2017 has to offer, and if there’s anything that’s true about the year, it’s that women have struggled, fought, scrapped, clawed and fought back against a society that has long since considered us second class citizens. Do yourself a favor this blustery winter and give the women of these melodramatic pictures your eyes and ears, whether they be in love, heartbroken, damned, damaged, or just living their lives in spite of it all.