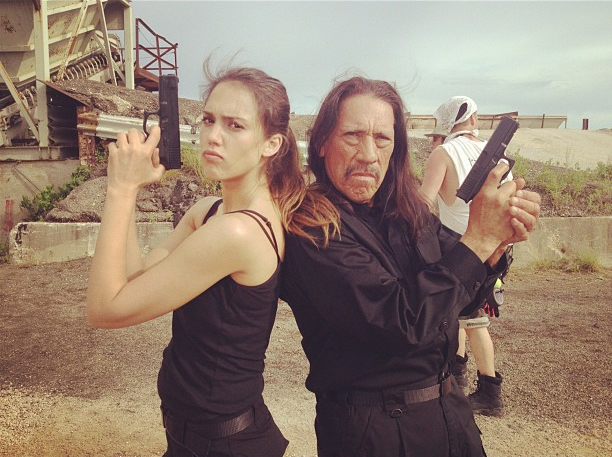 Before Robert Rodriguez gets around to Sin City: A Dame To Kill For, he is busy knocking out a sequel to Machete and with production already underway, we’ve already got new casting and a batch of set pics. Danny Trejo, Michelle Rodriguez and Jessica Alba are all back for the film and as we already know, they’re joined by Mel Gibson, Zoe Saldana, Sofia Vergara, Edward James Olmos, Amber Heard and last year’s Best Actor Oscar-nominee Demian Bichir.

Rodriguez took to his Twitter tonight to announce that he’s cast none other than Charlie Sheen as the President of the United States for Machete Kills (with picture proof). Since his Two and Half Men fiasco, the actor has slowly been picking up roles, his next being Roman Coppola‘s A Glimpse Inside the Mind of Charles Swan III. In the film, he’ll recruit Machete but other than some fake stories elements going around, we don’t know much else about the plot.

The director has said, “there is still a space element, for sure” and  they’ve “given the character a much bigger playground. It’s going to be like a James Bond movie, with a Bond-style villain.” That villain will be Gibson and he’ll be  “just a badass.” Rodriguez added, “This won’t just be him grinning, doing bad-guy stuff. He’s going to do something with it that’ll really get people talking.”  One can begin the discussion below with more pictures from Alba’s Twitter. Expect Machete Kills to arrive in theaters next summer.