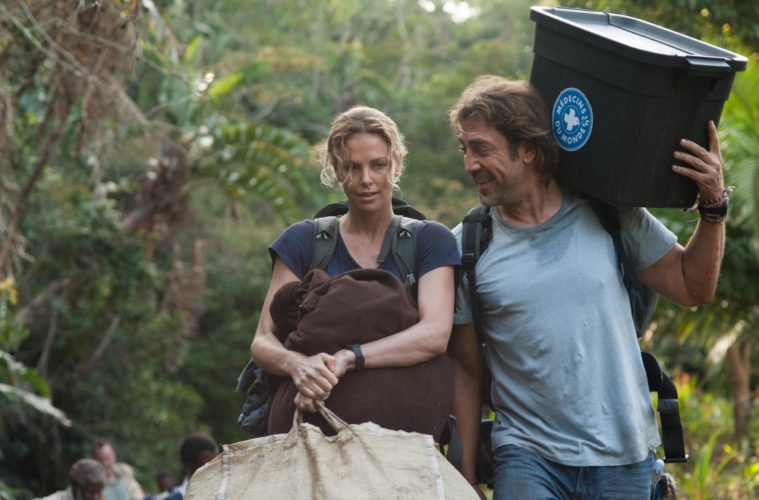 There is a moment in Sean Penn’s new film — for some reason screening this week in competition in Cannes — when, having navigated the safe passage of a group of refugees from Liberia to Sierra Leone, Charlize Theron’s aid worker asks herself, “In this place of so much war, had I found peace?” It’s a paradoxical query in which basically everything right and terribly wrong about The Last Face can be found. Indeed, cakes are being had and eaten by all involved.

Penn — an active humanitarian who enjoys commendably passing bags of rice out of the backs of trucks — would like nothing more than to educate his audience on the daily horrors of this sort of work on the front line. Good for him. However, while perched upon that high horse, he chooses to also use those horrors as a backdrop and catalyst for a romance between two of the planet’s best-looking actors.

Theron plays Dr. Wren Peterson, daughter of a fictional humanitarian who set up the Médecine du Monde NGO. The film takes place almost entirely in flashback. We learn she’s traded a life in the field for one as director of her deceased dad’s organization and, as she prepares to give a speech to a room full of wealthy donors, she reminisces about a recent passion.

The beautiful, bestubbled Latin American Ying to her beautiful, never-aging South African Yang is Miguel Leon (Javier Bardem), a disillusioned, but determined field doctor with an unhealthy obsession with the Red Hot Chili Peppers’ “Otherside.” They meet in a world that looks familiar on screen: knackered white Toyotas with UN insignia; rabbling street scenes viewed from a mud-flecked backseat window; moderately sweaty movie stars in linen shirts with the sleeves rolled up; and so forth and so on.

Wren’s fresh on the scene, of course, a rabbit in the headlights of a Kalashnikov-wielding-soldier-filled-pickup. Miguel’s been around the block and, thanks largely to Adèle Exarchopoulos’ terribly unfortunate field worker, we learn just how many times. Women are his “coping mechanism,” we’re told. Brought together through a series of shared euphoric moments and horrors, the doctors fall in love, but Wren soon loses belief in just how much her groundwork can accomplish. She yearns for bigger moves elsewhere.

A later scene back in the grey, sterile Western world explains that their romance faded without this daily struggle and drama. As we soon find out, Wren now spends her days arguing figures and budgets with administrational bureaucrats and Penn (no surprises) uses these moments to remind us all of our lack of action. “Impatient, non-solution-orientated critics” are to blame, apparently.

It’s been nine years since Penn’s last outing as a director, Into the Wild. In the interim he won an Oscar for his performance in Gus Van Sant’s Milk, but it would appear the biggest directorial influence has been his time with Terrence Malick on The Tree of Life. Barry Ackroyd — a renowned cinematographer known for his work with Ken Loach and Paul Greengrass — is left to do his best impression of Emmanuel Lubezki’s free-flowing camera. Composer Hans Zimmer muscles his way in at every available moment. Shirts ruffle in the wind with magic-hour lighting. You know the deal.

The nonsense really is rampant throughout, but the writing is on the wall (quite literally) from the opening introductory paragraph. This atrocious bit of text obliquely and quite carelessly references the conflicts in Sudan and Liberia as “a brutality shared by the love between… a man… and a woman.” Shudder. The guffaws that rang out after that particular moment were loud and clear. Many, many more would follow.

The Last Face premiered at the Cannes Film Festival and will be released on June 30. See our festival coverage below.