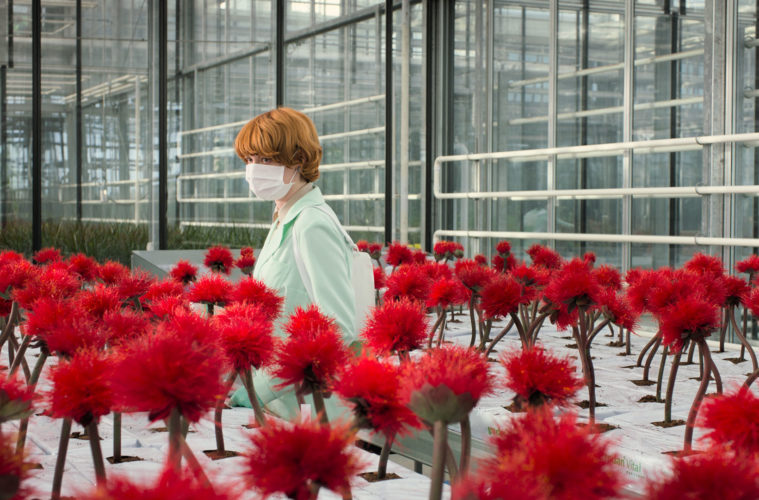 Jessica Hausner’s English-language debut Little Joe promises a crossbreed of shrewd science fiction and health care satire, but it scuppers its genre creds in exchange for a sterile arthouse drama that rather muddles its conceit.

Emily Beecham, so good as a bohemian partier in the British flick Dafne, plays Alice, a fastidious employee at a faceless corporation that makes genetically-modified natural remedies. Alice is the creator of a new blood-red flower that changes its scent to make its owner happy, with supposedly antidepressant properties, for a world in the thrall of a mental health crisis. It could make her bosses very rich, but is this to be one of those tales when man plays God and it all goes wrong?

A workaholic, Alice has a difficult, distant relationship with her teenage son Joe (a compelling Kit Connor) and as some sort of recompense for her neglect christens her new plant Little Joe, surely a sly reference to the deadly Audrey 2 plant from Little Shop of Horrors on the part of the filmmakers. But is her “happy plant” making its owners happier, or is it making more pernicious alterations, changing their characters, their personalities, to make them recognizable but uncannily alien? Are the flowers benevolent figures or looking, like some Triffids-like species, to take over humankind?

Hausner has been here before with this mode of ambiguity in her widely acclaimed 2009 pilgrimage drama Lourdes, in which a disabled woman is miraculously able to walk again–was it the hand of God? That film had a claim for that uncertainty to be a metaphor for faith in religion. But here, Hausner is unable to maintain that tightrope act, making a crucial mistake in introducing a character, Bella (Kerry Fox), whose fearmongering about the plant rather gives the game away earlier than necessary.

Plot holes crop up now and again. Against the rules, Alic brings a flower home for her son, but slowly becomes concerned by his behavior. Is this Joe just being a moody teenager? Surely Alice should have taken away the plant, or killed it, to find out.

Hausner and co-writer Géraldine Bajard never really get to grips with the potential for psychological terror at the center of what remains a genuinely intriguing premise. The director paints a sterile world: harsh lighting, straight lines, vibrant differences between the abstract labs and the nature that grows inside them (the flower’s design, by Marko Waschke is, however, a highlight). But there’s also sterility to the dialogue. Hausner is Austrian, and some of the exchanges come across in the faux-quasi dialogue of Lanthimos, but with none of his off-kilter wit. There’s also a bizarre staginess to scenes, especially when delivered by thespians like Ben Whishaw, underused as a lab partner who may or may not be in love with Alice. Cinematographer Martin Gschlacht also employs a distancing temperament, with a strange tendency to zoom the camera beyond of the foreground into the middle distance that annoyed rather than intrigued.

Instead, Little Joe becomes a quasi-serious scolding of not just the health care industry, but perhaps the notion of medical responses to depression. It’s a distasteful element in Hausner’s satire, an instability in the film between reproaching big pharma and critiquing antidepressants themselves. Is she saying that, like the plant, prescription drugs have the potential to change their personality into some deformed version of their older selves? I hardly think Hausner is pushing for such glib pseudo-science, but the film seems to be making a convoluted argument.