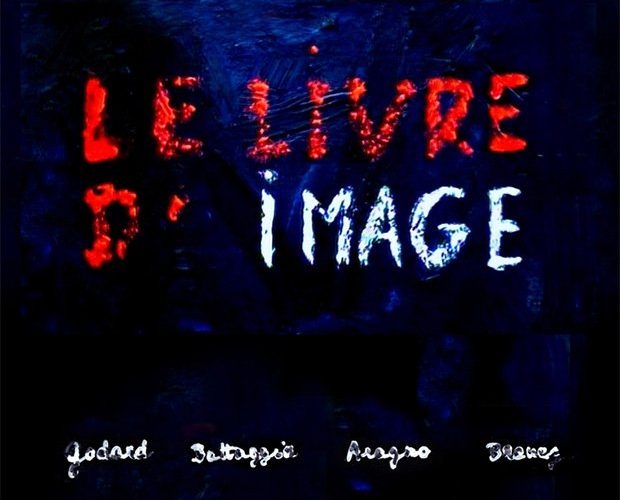 So, what to make of this Le Livre d’Image? Hmm. Speaking at the ISM in Berlin recently, Brian Eno (that granddaddy of sonic soups) pondered why we sometimes get a little frustrated when abstract painting doesn’t offer us immediate gratification in a way that we usually don’t with abstract music. One is just a bunch of sounds that maybe makes you feel something, he argues, but the other is just a bunch of colors and shapes that maybe do the same. We might extend that theory to Jean-Luc Godard’s latest video essay / stream of consciousness, a feature-length screen collage of footage that jumps from — amongst many other things — cinema of the 1950s, footage of ISIS, hands, trains, and, later on, the director’s thoughts on the Gulf nations. Sometimes cinema is also just a load of stuff that maybe makes you feel something.

Split into five sections of various lengths titled REMAKES, BOOK OF LAW, CENTRAL AREA, and two others that proved too long for both my memory and my notebook, Le Livre d’Image (for now known as The Image Book in English) offers a collection of fragmented thoughts on cinema and geopolitics, I think. If we are to take the first as a comment on Hollywood’s current regurgitation of old material and its wider meaning in society, we can come to the conclusion that JLG is not so pleased at the current state of things. We see the surreal apocalyptic ending of Robert Aldrich’s Kiss Me Deadly and one of the most debased scenes in Pasolini’s Salo alongside footage of nuclear warheads being tested, Michael Bay helicopters, and news reports of US military conquest. These are counterpointed with clips taken from movies widely known to be amongst the director’s favorites: the famous Dita Parlo close-up from Jean Vigo’s L’Atalante; Joan Crawford and those incomparable eyebrows in Johnny Guitar; the panning train-carriage shot from the opening of Ninotchka; and so on.

The middle three sections are shapeless by comparison, mostly shots of locomotives and images of hands. Godard chimes in with voiceovers throughout, but it’s only when we get to CENTRAL AREA and discussing the so-called Arab World, most notably Doha, that he really begins to string a few thoughts together. Taking up the majority of the Livre‘s second half, it suggests a man owning up to his own admiration for armed resistance. “I’ve always preferred the bombs,” he admits. Yeah, no shit.

Godard, now 87 years young, has not made a narrative feature since Film Socialisme back in 2010, a work that the programmers in Cannes had the ignominy to premiere in Un Certain Regard, the festival’s second-rung competition. Did that demotion leave a sour taste in his mouth? It just might have. The man is certainly not without his ego after all (who is?); nevertheless he was back competing for the Palme d’Or four years later with his whacky 3D experiment Goodbye to Language, a film that went on to share the jury prize with Xavier Dolan’s Mommy (a nice gesture by Jane Campion’s jury, given the 58 years that separate the two). It remains the only prize Godard has ever won here. Le Livre d’Image represents his 7th time in competition.

It is now 50 years since a group fronted by Godard closed down the festival in solidarity with the student protests in Paris, an act that the Eastern Bloc filmmakers in attendance that year (including Milos Forman and Roman Polanski) found laughable. What contradictions. What ego. Yet there is something quite reassuring about the fact that — infuriating as it sometimes may be — he has not lost that particular passion nor that roving eye, and that maybe, though he might not admit it, that love of images, too. Godard certainly ends Le Livre d’Image with a moment worthy of such love; he even cuts the audio for full effect. It’s an old black-and-white film of a group of buoyant dancers, one of whom falls to the floor at the end either from exhaustion or ecstasy — an image to make you feel something, perhaps. Sometimes cinema is just that simple.

The Image Book premiered at the Cannes Film Festival and opens on January 25. Find more of our festival coverage here.