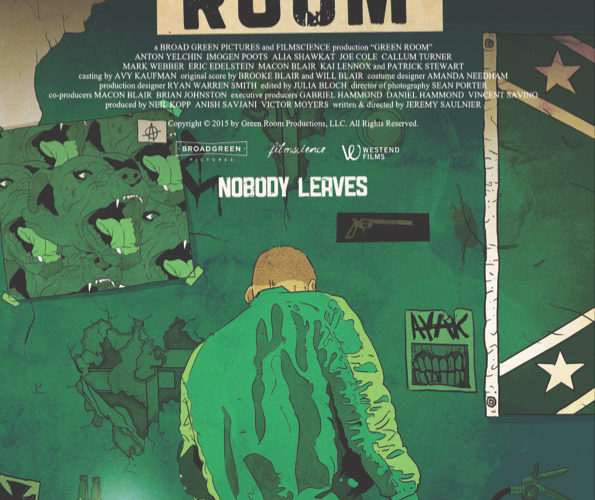 Jeremy Saulnier’s indie hit Blue Ruin, which won the FIPRESCI prize at the 2013 Directors’ Fortnight and went on to enjoy a critically lauded international run, was a genre exercise highly effective in its restraint. That film suffered in its denouement as Saulnier overreached by attempting to infuse his revenge story with philosophical gravitas. It seems that the writer/director learned from the experience and with his follow-up Green Room, also screening in the Directors’ Fortnight, he’s gone full genre, ditching any ambition at making a more elevated statement. However, in doing so he’s also jettisoned all moderation and while Green Room features a number of ingeniously crafted set pieces, it quickly winds up as an excessive, borderline pornographic revelry in extreme violence.

Script plausibility needn’t be high on the list of priorities for a horror film, but Green Room tends to take too much advantage of this liberty. A glaring example is the plot development on which the entire premise rests: why would a proudly idealistic left-wing punk band accept to play a gig at a Nazi hangout in the sticks? Never mind, they do, and after enraging every one of the hulking, swastika-tattooed skinheads by opening on a cover of the Dead Kennedys’ “Nazi Punks Fuck Off,” the injudicious five-piece walk in on a murder in the green room and thus starts their ordeal.

The concept of a small group of characters barricading themselves in an enclosed space to fend off a sustained siege is familiar from John Carpenter’s Assault on Precinct 13 and its many descendants. Saulnier updates the formula by having his assailants initially refrain from using firearms. The flimsy rationale is that the Nazis, in a plan devised by their leader (Patrick Stewart, making the most of his gravelly voice), want to pretend the band members were trespassing and got killed by the guard dogs. This doesn’t explain why it’s fine to maim them with machetes first but it does allow for pit bulls to rip out several jugulars in scrupulous detail. If open, gushing lacerations are your thing, Green Room definitely delivers.

In a film of this kind, it’s crucial for the viewer to be able to root for the protagonists’ survival (sadism aside, of course). Granted, weak characterizations come with the territory, but these characters are impossibly dumb. They never take the many opportunities to escape, or even keep working their way outwards, and instead return to the green room again and again despite having immediately established it to be a dead end. Moreover, they are killed off with utter disinterest, to the extent that at one point it isn’t fully clear whether one of them has died. Her death has to be surmised through her absence, only to be confirmed towards the end when her corpse is piled up with the rest. Saulnier is undeniably a skilled director, proficient at ratcheting up tension and making the most of a limited environment, but if he cares so little about his characters’ fates, how are we supposed to?