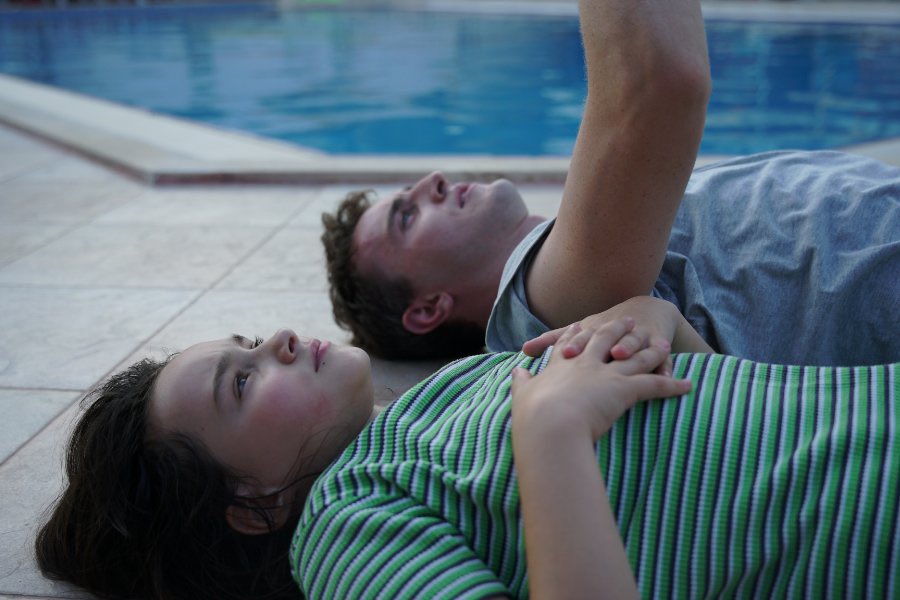 At around the halfway point of Sofia Coppola’s Somewhere a young girl and her distant father jumped into a swimming pool. The characters’ relationship was fraught, but Coppola had her cinematographer, Harris Savides, film it from underwater; holding on the moment when they mimed a tea party, lost in a world of their own and briefly forgetting the one above. “Ten decisions shape your life,” Julian Casablancas sang on the soundtrack, “you’ll be aware of five about.”

That moment is echoed in Aftersun, another story about a young girl, a distant father, a fraught relationship, and the kind of decisions that shape your life. It’s not the Chateau Marmont this time, but a budget holiday resort in Turkey; the kind that Irish and British people of a certain vintage might find particularly familiar. The director is Charlotte Wells, who was born in Scotland in 1987, and so her film’s soundtrack of Blur, Chumbawamba, and All Saints will be gratifying to most people of that age, too. (Although I have no idea how she cleared the tunes.) It’s a testament to her film’s freshness, the vibrancy of its colors and emotions, that the thought of Coppola only springs up once and is soon forgotten.

Aftersun is a triumph, both a rich sensory experience and impossibly sad. It’s also one of the best debuts to play at the Cannes Film Festival in years, selected in the Critic’s Week sidebar, where it won the jury prize. It stars Frankie Corio, a great find, and Paul Mescal, an actor who continues to find new shades on the sweet, emotionally stunted young men that have become his signature. (His Edinburgh accent here, I have been told, is dead on.) In Aftersun, Mescal—who convinced as a teenager in Normal People just two years ago—is tasked with playing a father for the first time. Of course, his age is not insignificant for the role: Wells’ film is a meditation on the warring forces of youth and responsibility that might have caused him, and perhaps her own father, to unravel.

Wells’ film really gets at the strangeness of these places, the packaged relaxation that so quickly curdles into boredom. It also stays clear of misery; nothing especially bad happens in Aftersun, even if the red flags are there. Its lasting effect is almost subterranean, a kind of sadness you can’t quite put your finger on. The plot picks up at the beginning of their trip: mom and dad are split so young Sophie (Corio) has joined her dad, Calum (Mescal), for some quality time in a sunny locale. Wells opens with Sophie filming Calum on a handheld video recorder (a recurring motif): “What do you want to be when you grow up,” she asks him, receiving a weathered smile in return. Something isn’t right, and later trips to a mud bath and a carpet shop won’t shake that feeling.

Sophie’s story is also a coming-of-age tale. There is the thrill and anxiety of hanging with the older kids, the painful stings of embarrassment. (Oh, to be young and feel such things.) Working with cinematographer Gregory Oke, Wells has created an aesthetic that, with rich use of color and light and a sharp eye for detail, evokes both Sophie’s child’s-eye perspective and the sense of a director shifting through her own memories. In one beautiful sequence near the beginning, Wells films from inside a hotel room as Sophie sleeps and Calum retreats to the balcony for a cig. Though all we can hear is the girl’s breathing, Calum, shot from behind, begins dancing to music only he can hear; and Mescal’s physicality is wonderful in these moments, swaying to himself or to Bowie later on.

It’s a beautiful film (if one with too many endings), brimming with inner life and creativity, and worthy of comparison to Lynne Ramsay’s Ratcatcher and other debuts of that ilk. One climactic moment plays out at karaoke night as Sophie tries coaxing her dad on stage to sing REM’s “Losing My Religion.” Will he join her, will he not? These decisions shape a life.

Aftersun premiered at Cannes Film Festival and will be released by A24.