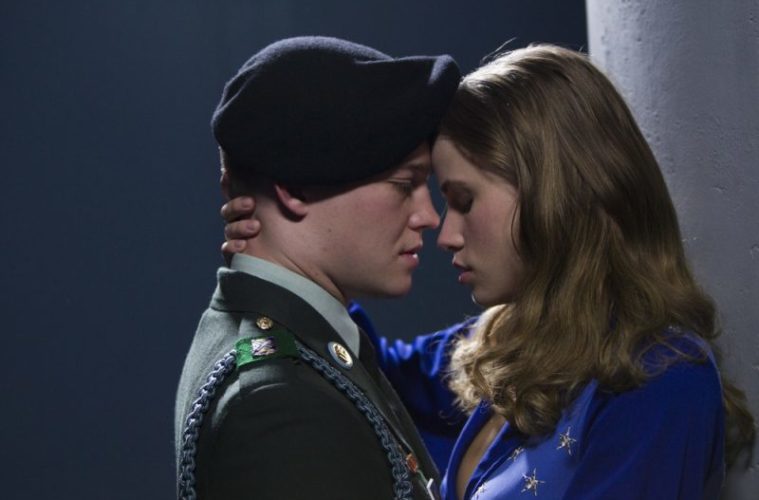 As messy as it is effective, Billy Lynn’s Long Halftime Walk attempts to be both a celebration and a satire on the American soldier and the way our country receives him or her. In Billy’s brief fling with Dallas cheerleader Faison do we get one of the more biting relationships of the film. The Film Stage spoke with actress Makenzie Leigh, who plays Faison, about injecting satire into character beats, pulling from her own life, and how personal politics play into a performance.

The Film Stage: Had you read the book or known about the [Ben Fountain] novel before filming? Was that something that was in your head?

Makenzie Leigh: I hadn’t. Not at all, because I was just given sides. And, to be honest, the sides were pretty long. I didn’t even have time to really read the script. Which is weird and rare, actually. Usually I can’t get a character together unless I read the full script, so I almost always get really frustrated because people only send you sides to audition with. I’m always like ‘How am I supposed to build a person?’ And this was the only time in my life where I received the sides and was like ‘Oh, I know exactly and I don’t want to read anything because I don’t want to be at all influenced.’

So the book didn’t really factor into it.

No, and then I made a conscious call later not to read it until I finished filming, because I felt like I knew that it was written from Billy’s POV, A.K.A. a male’s POV, A.K.A. a sexualized version of who she was, and it felt like it was really necessary for me to not know how men were seeing me, but me to exist on my own.

When you’re making a film like this, do you bring any of your personal politics into the role?

Yeah, I mean, definitely. I’m from Dallas, I grew up around these girls and this world. I absolutely brought everything I’ve ever felt about my upbringing and the girls I went to high school with… this type of woman. I tried to put it a little over into a satire, and I tried to use the accent to do that. Because most girls in Texas don’t have accents. It’s kind of like a trope in a way. And I wanted to play with that. So I made the decision to give her a Southern accent which more speaks to that she says she’s from Stovall [,Texas], like her family is from Stovall. So you could say she’s from somewhere else in Texas and moved to Dallas.

You were recently in the James White, a smaller film that relies less on dialogue and more on subtle emotional beats. How do you navigate that turn as a performer, especially when making something like Billy Lynn, which has very aware lines and themes presented throughout?

I actually think there’s no difference in what the role costs. And I think that’s a really great way to say it. I feel like if you’re acting and it’s not costing you something, you should do something else. Because then you’re just phoning it in. And not to say that I can’t be accused of phoning things in sometimes. [Laughs]

But not on purpose. I thought what was so great was I realized to play on the satire it’s that classic thing, you play humor straight. So to push the satire I had to get more genuine and more deep and to make it seem so absurd that someone would sometimes say some of these things that had to be completely real to me. And that had to make it complete absurd, hopefully, to the audience. If course I can’t know if that’s going to work but that’s what I was trying.

And that’s a tough balance. In talking about that tonal balance, one of the film’s strongest scenes comes towards the end where there’s a reveal of sorts regarding your character. You’re one thing and then you…

It was the last one we filmed. Well, the sex scene was last but that was the last speaking scene we filmed. [Laughs] It’s so amazing because I do feel [the scene] worked in the way that you said. I don’t know if it was like the full intention of what I went into. Some stuff you can plan for and some stuff just happens. I feel like either Ang chose the right take or edited us really nicely. It was a general idea but it was so nice that it got specified in one moment that you could see. It wasn’t just him projecting onto her, she’s equally projecting onto him. It’s so nice because it’s so rare that as a woman you’re allowed to project and you’re allowed to have that moment where you actually expect a certain level of masculinity from a guy. And you’re always playing with the other side of it. Like what the guy sees the woman as. So it was amazing to get the chance to flip the script and say, ‘This whole time you’ve been seeing me this way, guess what, I’m guilty of the same stuff. You see me as a cheerleader, I see you as a soldier. I see this as fitting together because of who you are. It’s so nice because it’s honest. Women do that in ways…I mean everyone does that. You’re in a relationship with someone you obviously like certain things about them. It’s attractive that they do this or do that. Whether you’re someone who wants protection or doesn’t, either way you’re dealing with masculinity and how that is desired or not.

Given the brand new technology being explored in this film (120 frames per second, 4K presentation, etc.), how aware are you of that when you’re filming?

Ang kept us away from the dailies. He didn’t want anyone to be aware. Because he was very scared that if we knew how close we were being filmed we would be very scared.

So he protected you guys from that a little bit?

Yeah. He would tell us that, ‘You’re going to get caught acting.’ So he was very intense about the fact that… ‘I can see that you’re acting, that’s acting, come on.’ He equally tried to not let us be aware of what he thought would be hindering the performance and yet was like, ‘You better not act, because it’s going to be clear in the most incredible definition that’s ever been seen for everyone to see forever.’ I guess actually only two theaters in America so that’s fine. [Laughs]