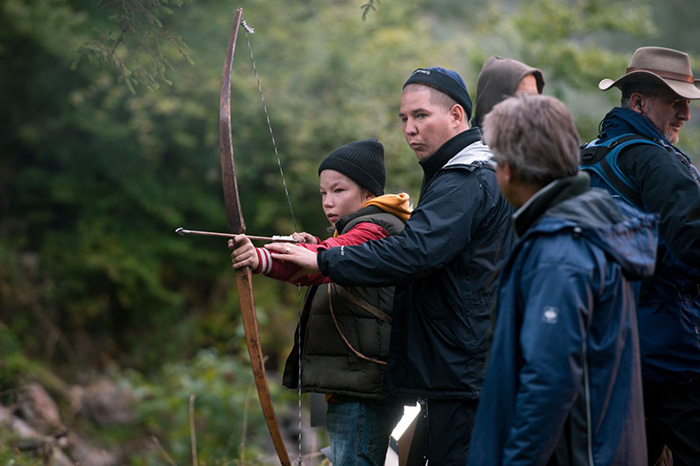 After finding success from his debut feature Rare Exports: A Christmas Tale—an expansion of a world he created through two previous shorts all released together by Oscilloscope—Finnish writer/director Jalmari Helander did what many European filmmakers do and went English-language for his sophomore effort. But he did so on his terms by once again writing his own script and recruiting familiar faces to act against the newly accessible stable of international stars provided to him. The result is action romp Big Game and it has the potential of turning even more stateside heads his way due to its decreased number of subtitles and broader scope.

The Film Stage: You brought Rare Exports to the Toronto International Film Festival in 2010 as part of their Discovery program, but Big Game debuted as a Midnight Madness screening. How great was that atmosphere amongst the genre junkies ready to consume the action?

Jalmari Helander: Well, it was one of the greatest experiences probably in my life because it was the first time an audience would see the film. I was also really nervous at how—do they like it and stuff? It was a really big audience.

I was crying there in my seat of happiness when people were laughing and clapping their hands during the show. It was absolutely super great.

This one has a very recognizable international cast with Jim Broadbent, Victor Garber, and Samuel L. Jackson. Besides switching to English, how different was your preparation?

It was quite similar because also on Rare Exports the like “working language” was English. We were filming it in Norway and it made life easy in that sense.

Of course it was interesting with—I had a lot of questions in my mind with how Onni [Tommila] will act because he has to speak English. Will it still go as well as before? It actually was really nice how well he and Sam worked together. It was really great. How has it been to watch Onni grow as an actor? Because he really is holding his own opposite Hollywood stars like Jackson and Ray Stevenson.

Yes. I can tell you I had some really nice moments behind the monitor when Onni’s giving a hard time to Sam in the forest. Sam never overshadowed Onni in any way. It was really nice to see how they worked together.

Of course the process of Onni learning how to act has been really interesting to follow. For example, in Rare Exports it was a totally different kind of working [relationship] because I had to have all kinds of prizes like, “If you do this one more take I’ll give you a piece of candy and a Coca Cola and maybe a hot dog when the day’s over.” [laughter]

Now I didn’t have to do that kind of stuff. So it was a helluva lot easier.

Do you see Onni continuing to pursue acting as a career?

Definitely he wants to be an actor. Of course there’s a lot of people in Finland on Finnish movies where Onni is quite popular at the moment. He’s definitely going to follow his Dad’s [Jorma Tommila] footsteps.

I love how you have Sam Jackson playing against type. You look at the poster and you’re thinking he’s going to be his badass persona as president, but he really is just a politician with no combat experience. Was that a factor in casting to play on our preconceptions?

He only had one demand: that he wanted to kick the main terrorist in the balls. [laughter] And that’s what he does. Back to his rapport with Onni, did he kind of take him under his wing? Maybe give some pointers in lieu of the candy from Rare Exports?

I don’t know. They had somehow some really good chemistry. The first time they met was in a hotel and it was a really like nervous situation and I was wondering what the hell was going to happen. It was really a hard and unnatural environment to meet in a hotel. What do you say and blah, blah, blah?

But when we started rehearsing somehow magic was happening almost instantly. And Sam was really happy playing with Onni. He respected Onni as much as Onni with Sam.

There’s a great juxtaposition between extreme 80s-style action and this really heartfelt coming-of-age drama. Big Game is billed as an over-the-top romp, but it really is about this child overcoming the odds to step out of his father’s shadow isn’t it?

Definitely. I’ve always liked underdog stories. When I started to imagine the film [I thought] it would be cool to make somebody who nobody believes in [that] does something really, really over-the-top—something that no one could imagine he’d be capable of doing. It was real important to me to have that kind of situation. I’ve always liked that.

And the 80s action really helps facilitate that.

It somehow gives you a little bit more room with the action scenes if you have that kind of feeling. So you can understand they are not like totally serious. It’s more fun to almost like—I think of it like Pixar kind of movie in a way also. Where you have more room for inventing what the people can do. Reality: we’re leaving it. It gives you more freedom and that’s nice. And how was it working with Broadbent, Garber, and Felicity Huffman in the studio scenes? Were they allowed to improvise a bit or was everything pretty close to the script?

We had some improvising, but it was quite straightforward because it was the last four days of our shooting in the studio, in the Pentagon set with the actors. We did quite a lot of scenes each day and working with them was—of course I was really nervous about it. I hadn’t seen any of them and we are starting shooting next day. I was meeting with all of them like the day before and was thinking it would be really hard to do, but they were so super nice. Especially someone like Ted Levine—he was probably my favorite guy on a set ever. He was really nice.

How difficult was it shooting the exterior scenes in the mountains? Did you do extensive scouting?

There was a lot of scouting for this because I wanted to—we didn’t have the budget to make anything that big in that sense. So it’s wise to go in a place where you already have huge landscapes. It gives you the feel of big, big adventure film.

Of course there’s always problems where you’re up in the mountains and stuff like that, but it gives you that edge. I really like doing films outdoors and in hard locations. It gives quite a lot to the whole crew and the actors if they support it.

With that sense of “big”, could you talk about the score? It’s very much this epic, sweeping score that punctuates the action.

Yes. Juri and Miska [Seppä] did a really great job. One of my favorite things of the process of making this film was actually in the big orchestra where we recorded the music. Hearing for the first time this score on real [live instruments] was real emotional. It was great.

As a result of Big Game‘s festival success and its impending US release, have you been fielding offers from Hollywood? Any scripts coming your way?

Oh there’s been a helluva lot of offers at the moment and during this year. But nothing that I could say I would really want to make. Cause it has to be like—I’m writing my own movies—so it has to be something that really interests me when I read it. I want to feel like I could be the best man for the job.

But at the moment we are with the producer Petri Jokiranta developing our third film and we’ll see what happens with that.

Can we expect Onni to be back as well?

Probably yes. It will be bigger and [with] more action. But I can’t tell you anything else about it. [laughter]