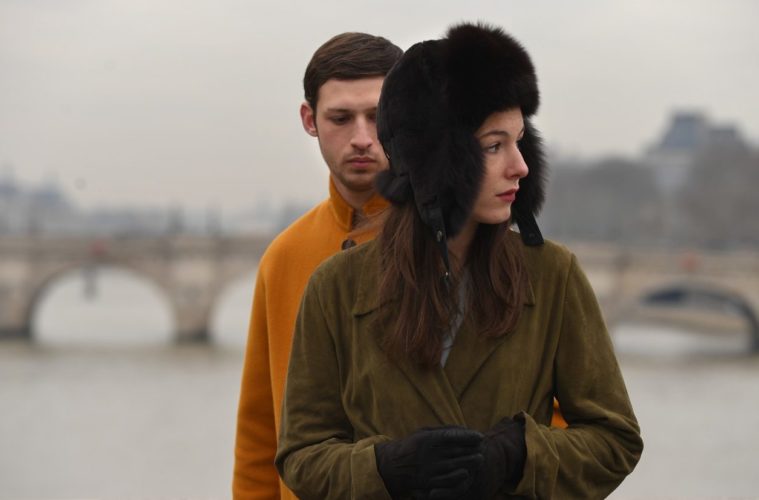 Relocation becomes dislocation in director Nadav Lapid’s intense, beguiling Synonyms. Winner of the Golden Bear at the Berlin Film Festival, the story follows a young Israeli man who moves to Paris in the hope of shedding his past and remolding his identity, yet instead finds his sense of self chipped away at. This is an unsettling film about nationality and how society shapes people in a way that is difficult to entirely shake off.

For Yoav (spellbinding first-time actor Tom Mercier) Paris is the antithesis of everything with which he’s been brought up. A liberal, tolerant, sexy place, France is not the militaristic nation state that Yoav takes his home country to be. “Israel will die before I die,” he exclaims, “I’ll be buried in Pere Lachaise!” He refuses to speak Hebrew and buries a bulky French dictionary under his arm as he goes about town–the synonyms of the film’s title speak of his ritualistic approach to learning the new language. In French, he recites alternate adjectives about Israel: “nasty, obscene, ignorant, mean-spirited…” His aggressive tone betrays his adherence to the militaristic ideology he now wants to reject.

There’s more to this movie than meets the eye, and the sheer strangeness of the experience begins in its opening scene. Yoav opens the keys to a palatial but empty Parisian apartment, maybe an Airbnb he has for the night. He strips naked, settles down in the tub, but the sereneness of the scene (unnerving cinematography here by Shai Goldman) is interrupted by a scuffle coming from outside the bathroom. He rushes out, but all his clothes have vanished. He runs around shivering, tripping up, and eventually comes to a halt, back in the bathwater, resisting the winter cold in a fetal position. Is this a baptism or a rebirth?

Except the morning afterwards he’s awoken, almost matter of fact, by a young couple who live in the building. Writer Emile (Quentin Dolmaire) and conservatory musician Caroline (Louise Chevillotte) are archetypal bourgeois Frenchies, immaculately sophisticated, the former looking a splitting image of Jean-Pierre Léaud in Masculin Féminin. They give Yoav a wad of cash and he becomes a curious piece of orientalist kitsch for them to play with, a mysterious figure they dress up in their own clothes and lap up bizarre stories of his days in the Israeli Defense Force.

Presented with this fantasy of what Parisian life can be, Yoav’s imperceptivity starts to gnaw away at his psyche. The more this millennial expat is presented with the perfect vision of what he wants out of his life, the more it confronts him, and the more he finds it difficult to accept. His self-hatred for his Israeli identity becomes conflicted when he realizes that France has many of the same arcane militaristic customs he despises. In one of the film’s most provocative sequences, set in a French citizenship class, he is asked to sing the Marseillaise, and gets ever-more worked up when he realizes the bombastic pugnacity of lyrics: “Let an impure blood water our furrows!” The uncanniness shakes him. Like Hamlet, Yoav doesn’t just act mad; he eventually becomes mad.

The genius of Mercier’s performance is it deftly walks a tightrope between indignation and insanity, Yoav’s imposing physicality belying his pseudo-intellectual treatises as he frequently looks on the brink of rage. Despite the wealth offered by his new-found friends, he lives in poverty and a significant scene late in the picture–in which Yoav’s father turns up unannounced–showcases the ever-present possibility that Yoav is a radically unreliable narrator. Goldman’s cinematography becomes a key player in portraying his erratic personality as the running time elapses, switching to from crisp lenses to handheld cameras to phones to depict Yoav’s near-schizophrenia of viewpoints. As an exercise in depicting the disjointed link between national and personal identity, Synonyms is dazzling. As a portrait of displacement in a world becoming both more globalized and more nationalistic, it is a testament.

Synonyms premiered at the Berlin International Film Festival and opens on October 25.