Berlin Review: Red Moon Tide is One-Half of a Beautiful Meditation on Trauma and Loss 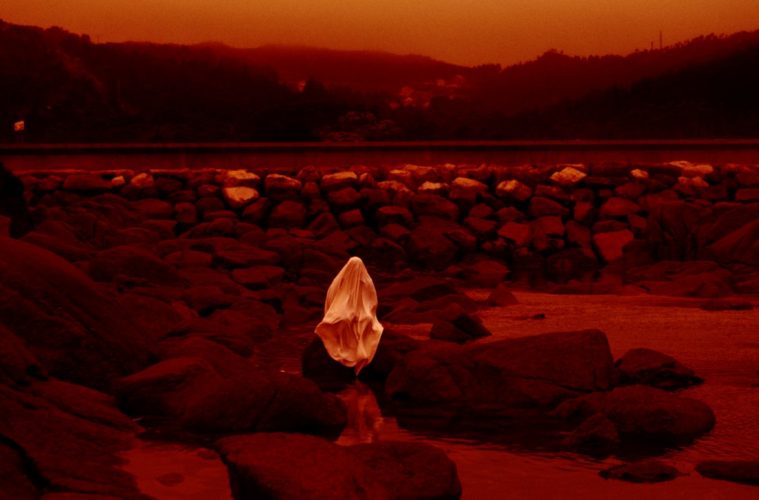 Framed as a series of tableaux, in which the residents of a seaside town on the Galician coast appear to be stuck in time–unmoving against the changing scenery, yet constantly thinking through voiceover–writer/director Lois Patiño’s gorgeously trippy Red Moon Tide oscillates between fairy tale and visual essay creating an uneven narrative that is often overshadowed by the film’s compositional beauty.

Mourning the loss of Rubio, a diver whose main job is to retrieve the bodies of those who died in shipwrecks, the unnamed town has become stuck. Bodies crowd the streets, homes, and shorelines, but never move. All stuck in a limbo, Patiño’s main narrative unfurls through voiceover as the residents fill in the backstory of Rubio, and the fight that he had with an unnamed mythical creature. In doing so, Rubio’s death has frozen the town, leaving residents with only their thoughts as time goes by, without anyone ever being sure if they’ve been there a few days or a thousand years.

Purposely fragmentary, Patiño appears more concerned with amassing stories of loss, rather than collecting these individual moments into any type of coherent narrative. Repeated cycles of narration, either focusing on Rubio’s death or the purposeless of time, begin to strain after a while. Eventually invoking Macbeth, three witches show up, the only ones able to move through the town, and set about attempting to unstick the people. How they go about this is anyone’s guess, despite covering the villagers with white sheets for… some purpose. Yet all of these developments are wordlessly portrayed, as Red Moon Tide focalizes mood over method. What the rules of this curse are is anyone’s guess.

Patiño, who also serves as cinematographer, has crafted a visually arresting film, creating a series of moments that foreground the stillness of the town and the people who reside in it. We witness he repeated cyclical progression of days into nights and tides pushing up against the coast. Life appears to go on around the villagers, but how much of that life is movement forward versus closed loops? In contrasting the two, the film appears to argue for the interrelation of progress or regression. What it means to move forward, and how trauma and grief impede that development.

Where the film falters, however, is in its invocation of the mythical. Who Rubio is, and what significance his fight has on the town, is too opaque. Patiño eventually retreats into, paradoxically, over-explanation and under-development, as the witches descend and Rubio becomes the focal point, as if not trusting the audience’s attention to be held on a series of feature-length still lives. That sentiment may have a tinge of truth as the successive series of voiceover narration based around ideas of loss and temporal manipulation can feel a touch repetitive. In its latter moments, the film plunges into the inexplicable, both in regards to what is actually happening on the screen, and what significance they have in relation to the narrative that preceded it.

The film is then bifurcated into two sections, pre-arrival of the witches and post. The earlier section is a profoundly beautiful reflection on grief, coupled with a tantalizingly under-explained sci-fi concept. The latter section serves as a corrective, not only going into too much detail about the rules behind the supposed mythical curse, but also frustratingly leaving behind the thematic undercurrents of the earlier section in favor of an entirely new protagonist in Rubio. Red Moon Tide is obviously the work of a director willing to push the boundaries of visual narrative, but he doesn’t see that work fully through.