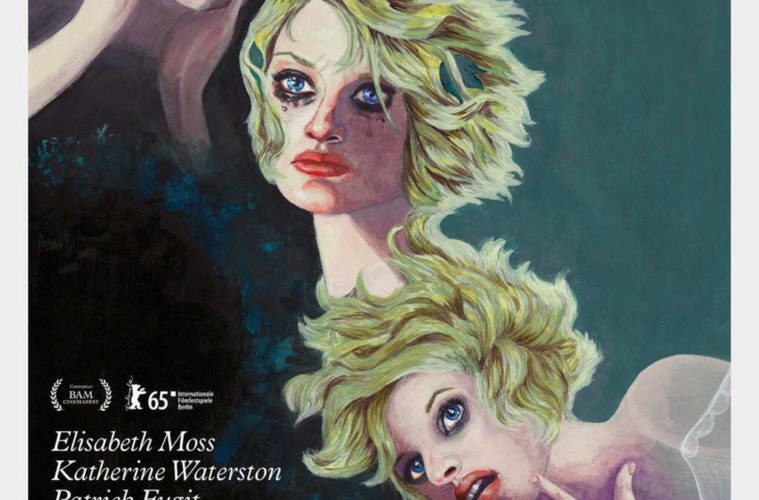 Alex Ross Perry does not deal in likeable protagonists. The brother and sister from his 2011 breakthrough The Color Wheel and the titular hero of last year’s indie hit Listen Up Philip rank amongst the most smart-mouthed, abrasive and hopelessly narcissistic individuals to be found in cinema. It’s therefore an impressive feat that with Catherine (Elisabeth Moss) and Virginia (Katherine Waterston), the main characters of Queen of Earth, Perry has managed to concoct two even more insufferable personalities. That’s not to say Queen of Earth is a bad film – on the contrary, it’s Perry’s most impeccably constructed and executed yet – but it does take a certain measure of masochism to want to be locked up in this searing chamber drama for 90 minutes.

Best friends Catherine and Virginia are children of the New York elite who have always led a cushy life of privilege and nepotism. Left by her boyfriend shortly after the suicide of her father, Catherine is an emotional wreck. To get her back on her feet, the two friends leave New York for a retreat at the isolated lakeside house owned by Virginia’s family. It’s difficult to fathom why these women are best friends, other than perhaps by default, having found no one else willing to put up with their rampant egomania. From the get-go their exchanges are nothing but confrontational, each always reading innuendo in the other’s words and trying to deflect the focus of every conversation back on herself. Over the course of their week-long stay, Catherine’s mental state spirals downwards in conjunction with the heightening acrimony between her and Virginia. Through the recurring use of flashbacks to their stay at the house a year earlier, when it was Virginia that was going through a tough time, the film evolves from a depiction of psychological breakdown to a portrait of a toxic friendship in the last stages of disintegration.

Both actresses impersonate their roles with full conviction. The customarily amiable Moss, whose character was such a welcome breath of fresh air in Listen Up Philip’s suffocating world of male egotism, is unrecognizable here, showing that she’s just as capable of taking on the other extreme. Waterstone, too, gives an excellent performance, playing Virginia as composed yet seething in contrast to the increasingly manic Catherine. The resulting tension is amplified through the confluence of Sean Price William’s outstanding cinematography and the film’s unnerving score, composed by Keegan DeWitt. Aside from a short prelude depicting Catherine’s break-up, the film is entirely set at the lake house, which is rendered as a claustrophobic huis-clos through a predominance of medium shots and close-ups, while creeping zooms and camera movements as well as haunting music reminiscent of The Shining generate a constant sense of foreboding.

The similarity to The Shining is no coincidence as Queen of Earth pays extensive tribute to vintage psychological thrillers. Even on a strictly aesthetic level – from the font of its titles (an old-fashioned, slender cursive in matte pink), to the luscious grain of the 16mm film stock and the lack of any props such as smartphones or laptops that would locate the story in the present – the film aligns itself with an earlier era of filmmaking. The most obvious homage is to Roman Polanski, signaled explicitly through the salad that Catherine leaves to rot on her nightstand, a clear reference to the rabbit from Repulsion. Perry doesn’t come off badly in the comparison, either, proving himself expert at modulating and intensifying mood through minimal means. Early on, the film intercuts picturesque shots of the lake between scenes, the water’s placid surface providing relief from the taut atmosphere inside the house. As the film progresses, these shots gradually disappear, and their absence is sorely felt even if not necessarily noticed on a conscious level. It is through such subtle touches that the film crafts a steady escalation of suspense throughout, reaching a nigh unbearable pitch in the lead-up to the climax. Satisfyingly understated, the conclusion throws in one last intimation of malice that should make viewers infinitely grateful for not having friends like these. Or, perhaps, trigger a fit of paranoia.