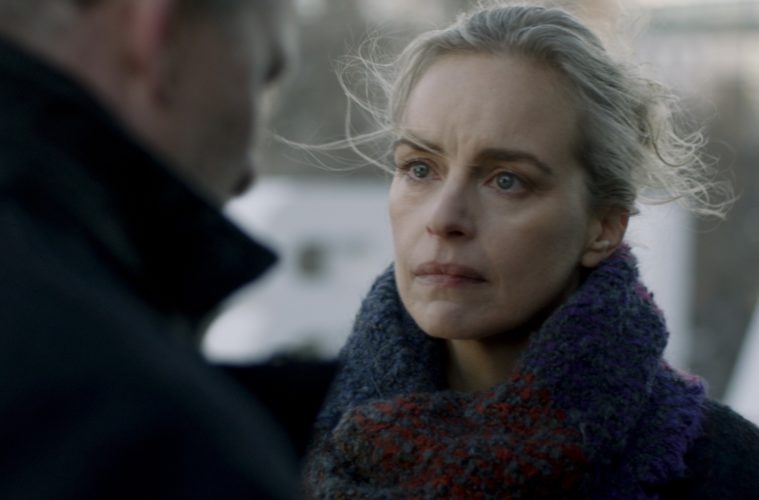 Nina Hoss and Lars Eidinger, two of Germany’s preeminent acting talents, play twins coming to terms with a diagnosis of terminal illness in My Little Sister, the second narrative film by Stéphanie Chuat and Véronique Reymond. It’s a film that carries emotional power more in its moments of natural reflexiveness than the weepie genre’s more conventional emotional beats, anchored by two focused lead performances that thankfully don’t succumb to melodrama.

Hoss plays Lisa, a Berlin playwright who’s given up the stage and settled into family life in Switzerland. But her heart remains in the German capital, where her brother Sven (Eidinger) is still a leading figure in the city’s theater scene. Eidinger is basically playing an extension of himself here, as a leading player on the German stage himself, star performer of an adaptation of Hamlet at Berlin’s Schaubühne that’s been playing on and off since 2008. The blend of reality and fiction is muddied still further by the presence of Thomas Ostermaier–who directed many of Eidinger’s performances–playing Sven’s director, who is reviving Hamlet, but mulling over putting someone in front of an audience in such a fragile physical state.

That’s because Sven was recently diagnosed with an aggressive form of cancer, and the film opens with the two twins in hospital–Lisa is a bone-marrow donor, but even as lucky as Sven is to have an easily available match, the transplant could fail. As Sven’s condition worsens, Lisa whisks her brother off to Switzerland, hoping the change of scene, the mountain air will soothe his recovery. Instead, Sven is desperate to get back on stage. Lisa concedes that his absence from the theater is killing him faster than any disease.

But it’s not the absence of the crowd or the stage that is facilitating Sven’s demise–it’s that he is, for perhaps the first time in his life, at others’ mercy. The film is most clear-sighted at articulating that diagnoses like this makes one lose their agency, lose the right to decide a future to one’s life, lose possibilities and hopes that had always previously been constant. It’s also a period when Sven can’t escape into another character, metaphorically enforced by his various wigs that could never hope to disguise his hair loss: for now, he can only be himself.

Hoss and Eidinger are the same age and met at acting schools, and their careers have developed in peculiar parallel: both were star players at the Schaubühne in the early 2000s and came to cinema toward the end of that decade (Hoss, of course, became known for her collaborations with Berliner Christian Petzold in Yella, Barbara, and Phoenix). The film is in some way a testament to the uniqueness and strength of Lisa and Sven’s family bonds, which are never in doubt.

Early sequences are bright and funny, and there are some special moments with the twins’ mother Kathy (a sparkling Marthe Keller), a former thespian, whose dyspeptic demeanor masks a fear and anger over her son’s deteriorating condition. The narrative occasionally takes unnecessary detours (a furious argument about Swiss schooling seemed to belong in a different film) but to its credit, My Little Sister doesn’t fall to corny sentimentality in the later stages and is muscular in its depiction of the clinical horrors of the illness. Filip Zumbrunn’s sharp camerawork is simple and unfussy in the cold, sterile lighting of hospital beds. The best moments are the freer, looser sequences when the acting comes to the fore. The film’s most beguiling scene is as simple as a stranger’s offer to make Lisa coffee, a question that sends her into uncontrollable sobbing, a terrible realization, perhaps, that she ceded control over the direction of the lives around her. This is a moving, perceptive film, elevated by rich performances.

My Little Sister premiered at the Berlin International Film Festival.