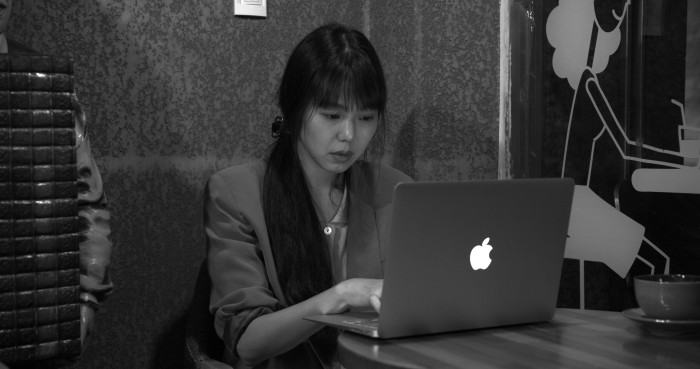 If you happen to be in need of motivation, take a moment to consider that South Korean filmmaker Hong Sang-soo has released fourteen feature-length movies this decade thus far, and four of them have premiered within the past year. As levels of cinematic productivity go that’s up there with the Rainer Werner Fassbinders of this world. Similar to that late, great German, one of the reasons he is able to achieve such metrics is that he continuously works with roughly the same recurring cast. Hong’s filmmaking style–that of reworking the same elements again and again–means that, unlike Fassbinder perhaps, there is a temptation to compare each concurrent release. Given that the last few years have offered high watermarks such as Right Now, Wrong Then and On the Beach at Night Alone, it might be easy to judge his latest film (a medium-length black-and-white feature called Grass) as being small in scope, even unambitious perhaps. But it is nothing of the sort.

The film stars Hong’s currently inseparable muse Kim Min-hee (who has appeared in five out of six of his latest features and has played the lead in three) as a casual writer who spends most of the film tapping away on her MacBook as she eavesdrops on conversations in a quaint Seoul cafe. The content of these chats ranges from the utterly mundane to far more weighted meditations, most significantly a lost love and a suicide. Hong is generally at his best when examining how men and women interact and this setting allows him to once again put those subtleties and idiosyncrasies at the front of his lens or, perhaps more accurately, under his microscope.

The artistic relationship shared by Hong and Kim Min-hee has been key to the filmmaker’s recent run of exceptional films and it goes without saying that the actress’ involvement has paralleled the director’s own evolving scrutiny of gender roles in his work. In Grass she appears no less statuesque in her undeniable beauty but–as in last year’s On The Beach at Night Alone and The Day After–there is a newfound saltiness to how her character deals with the men who surround her, often meeting their groveling advances with a bemused dismissiveness that makes them look all the more foolish. The prime culprit this time is a writer whose self-involvement is so great he feels it appropriate to request that she move in with him in order to be his own live-in muse.

In Grass she is introduced multiple times with one of Hong’s signature zooms: the camera goofily pulling away from a conversation to reveal her sitting at a table nearby, listening in. Hong then lets us hear her inner monologues as she types up a more poetic version of the conversation she’s been overhearing. This romanticizing of the mundane appears to be the film’s central gag. Indeed, the swooning strings of Schubert and Pachelbel that we hear on the café’s stereo offer each conversation a great deal of gravitas–even reaching crescendos as the conversations do–but there is a clear sense that a nearby tongue might be being planted in a nearby cheek.

The daytime café setting means that soju consumption is kept to a relative minimum this time out but, rest assured, a bottle or two are inevitably snuck in late on. That sort of playful vibe abounds in Grass. Kim Min-hee’s character joins her brother and his fiancée for lunch and makes light about his effeminate nature and scolds him for following his partner and not picking up the bill. Later we spot a couple in traditional Japanese garb taking selfies. The film seems both envious and amused by such a shallow and yet endearing romantic ideal. Are the grand and absurd moments of our lives perhaps more closely acquainted with one another then we’d like to admit? Grass seems to think so, and it delivers that assumption with a welcome–indeed, almost humane–dose of humor.