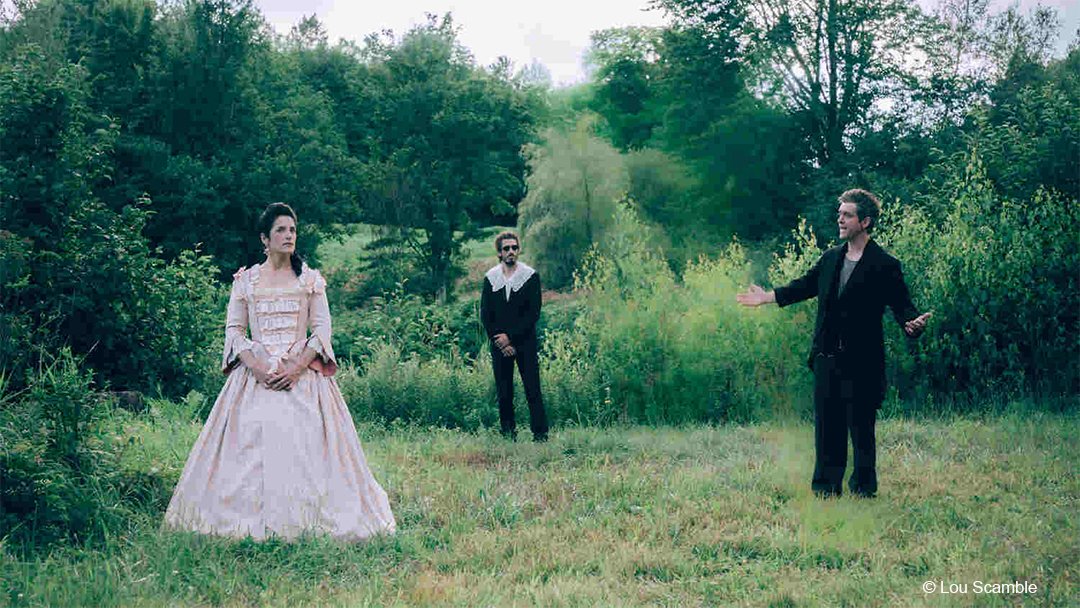 An aura of pure eccentricity billows off the new film by Québécois provocateur Denis Côté, like a fug of stale-smelling nitrous oxide. Akin to his prior work only in its magpie-like experimental sensibility, Social Hygiene finds the festival mainstay delving into the static visuals of filmed-theatre presentations, but with a postmodern streak that collapses historical eras and cinematic conventions at will. All through its compact but still satisfying 75-minute runtime, the viewer is liable to ask, “What on earth is this?”, and by its finale, this unanswered query feels rewarding as opposed to exasperating. But you can still feel Côté chuckling behind our backs.

Social Hygiene has an austerity of means initiated by a modest budget, although Côté has opted for this to harness the experimentation it frees up. So we have the majority of the action taking place in around half-a-dozen set-ups of static master shots, all photographed from such a physically-distanced level that we can barely make out his actors’ facial features. And the performers themselves never move from a pre-ordained placement in the shot, limiting their expressiveness to emphatic body language and stagy line deliveries, in lieu of being allowed to move about. What’s more, Côté foregrounds cinematic illusionism by having his characters wear anachronistic costumes (say, ballgowns or tunics), and mime actions such as sword fighting or gazing through binoculars. If it’s possible to get pleasantly drunk on formal gamesmanship, of puzzling a filmmaker’s eccentric decisions into a coherent whole, Côté’s work here is a success.

The film’s elements of characterization, and the degrees of plot development and suspense it does possess, feel leached from a bygone age. Like his great inspiration Fassbinder, Côté loves a colorful gallery of oddballs to populate his work, with his cast here feeling like gatecrashers from Peter Greenaway or Favourite-era Lanthimos. All the main action revolves around Antonin (Maxim Gaudette, a prominent thespian in Quebec), an archetypal vagabond-wastrel conjured straight out of Oscar Wilde. He cavorts around in puffy stockings, an angular waistcoat, and a slumping designer leather jacket (which he stole, naturally), trading florid speeches with five women who all carry miscellaneous levels of contempt for him. Their character names are spectacles in themselves; amongst them are sister Solveig (Larissa Corriveau), bombarding Antonin with insults; his wife Églantine (Evelyne Rompré) who blindsides him with a confession of adultery to match his own; his mistress Cassiopée (Eve Duranceau), rebuffing offers of commitment; and tax official Rose (Kathleen Fortin), dressed like Tilda Swinton in Moonrise Kingdom, who wants to send him to a prison where, in Antonin’s words, “the inmates have more tattoos than teeth.” (Funnily enough, Côté himself is the most tatted-up of contemporary filmmakers.)

There’s also Aurore, (Éléonore Loiselle) a young, androgynous woman loping through the woods, whose short scenes are captured in Côté’s more recognised pseudo-documentary style. How her arc combines with the rest lends Social Hygiene its oddly cubist form of suspense.

Shot during the pandemic, the work begs to be interpreted as an expression of such; in fact, both the script and title were supposedly devised in 2015, on a particularly melancholy trip to Sarajevo where Côté devoured lots of the Swiss modernist writer Robert Walser. Still, the Covid-era resonances are unmistakable: the cast mainly interacting from meters apart, having to project their voice to their scene partner––an almost Pynthon-esque parody of social distancing. Antonin himself is afflicted with a kind of soul-sickness: a reminder that even post-vaccine, there are other forms of hygiene to maintain, lest we infect our peers.

Writing about his wildlife portrait Bestiaire in Cinema Scope magazine, Côté spoke of being inspired by “a series of constraints, of refusals, perhaps even from the negation of the idea of subject matter itself.” If we’re being uncharitable, we could say this is his variation on George Costanza in Seinfeld’s TV pitch meeting: the show or film about “nothing.” But it speaks to his self-awareness, likely honed in his years as a salaried critic for Montreal newspapers and broadcasting, about audience expectations, and how skillful directors can paradoxically endear themselves to the audience, whilst leaving them perplexed. To risk another cliché, Social Hygiene is a neo-Dadaist “film for film’s sake,” an experience to absorb or squint at, but where more rational forms of understanding are happily deflected. It’s a work of carefully-wrought artifice that reminds you this is really what all films are.