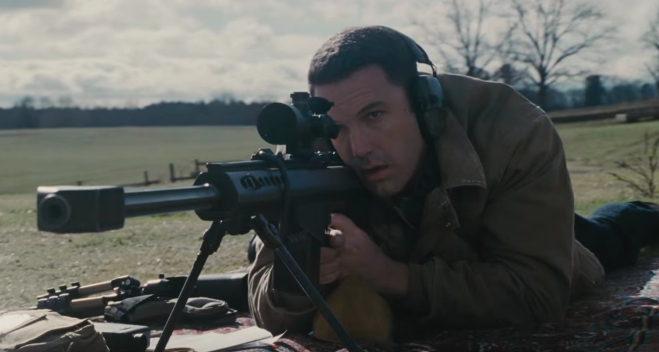 Ben Affleck Becomes an Assassin in First Trailer For ‘The Accountant’

Despite being perhaps the best element of Batman v Superman: Dawn of Justice, it’s safe to say Ben Affleck can’t be pleased with how the superhero showdown turned out. He’ll have a bigger role on the Justice League follow-up, serving as executive producer, and in the meantime, he’s sticking with Warner Bros. for all of his currently scheduled upcoming projects. Aside from his next directorial effort Live By Night, due in 2017, this fall he’s leading The Accountant, and the first trailer has arrived.

Coming from Warrior director Gavin O’Connor, the film follows Affleck’s character as an accountant by day and an assassin by night. The first trailer, backed by Radiohead‘s “Everything in its Right Place,” has quite an effective build-up while still keeping a fair amount of mystery. Check out the trailer below for the film also starring Anna Kendrick, J. K. Simmons, Jon Bernthal, Jeffrey Tambor, John Lithgow, and Cynthia Addai-Robinson.

Christian Wolff (Ben Affleck) is a math savant with more affinity for numbers than people. Behind the cover of a small-town CPA office, he works as a freelance accountant for some of the world’s most dangerous criminal organizations. With the Treasury Department’s Crime Enforcement Division, run by Ray King (J.K. Simmons), starting to close in, Christian takes on a legitimate client: a state-of-the-art robotics company where an accounting clerk (Anna Kendrick) has discovered a discrepancy involving millions of dollars. But as Christian uncooks the books and gets closer to the truth, it is the body count that starts to rise.