Béla Tarr on Restoring ‘Sátántangó,’ the Perfect Film School, and Completing His Filmography 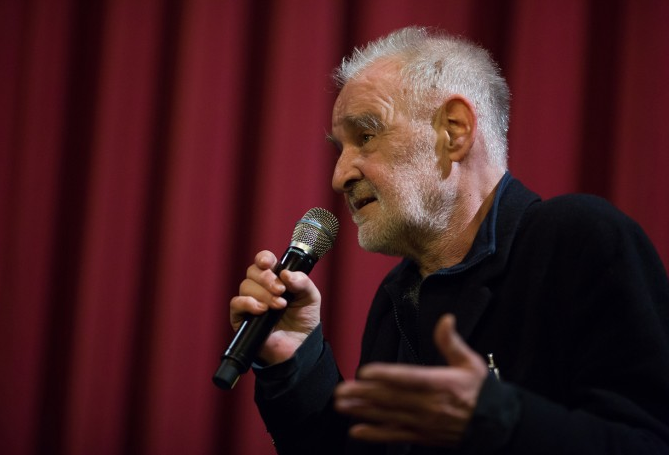 Eight years on from announcing his retirement from filmmaking following the release of The Turin Horse, Hungarian maestro Béla Tarr is keeping busy. In 2013 he opened a film school in Sarajevo and ran it for three years. In 2017 he contributed a multi-room video-art installation to the EYE film museum in Amsterdam. This year sees the opening of a new experimental theatrical work in Vienna as well as the release of a 4K restoration of his 1994 opus Sátántangó.

Tarr attended the Berlin Film Festival earlier this month for the first public screening of that 432-minute epic’s new iteration. The event took place in the Delphi theatre in Charlottenberg, the very same cinema where it had its German premiere a quarter-century ago. We caught a moment with him, in-between smoke breaks, just across the road in the Savoy hotel. His mood was terse, fraught, a little gloomy. One wouldn’t have it any other way.

The Film Stage: When was the last time you watched Sátántangó through?

Béla Tarr: Last month. Because I was sitting in a film lab and I watched it take-by-take and I did the grading.

Do you think there is a significance to it being released again in this moment? The images it contains of people on the move, leaving their homes, seem particularly resonant.

I think yes. It’s never late or never early. And you know, during these 25 years, this film is somehow still alive. People are still going to see it. The new generation is coming and watching.

There is a universality.

This stuff is universal. It’s not temporary shit. It survived the times and it’s still true now.

I wanted to ask about your film school.

My film school is closed. It was four years of my life in Sarajevo and it was a wonderful experience. We had young people from Japan, Korea, Singapore, India, Colombia, Brazil, Mexico, the States, and Iceland. One guy from the Faroe Islands. Poland, Spain, France, Portugal. It was really a bunch of young filmmakers and we were working all the time. And I said all the time, “No education, just liberation.”

And my goal was to make you free and to give you the chance to be yourself. You find your own way, how you can articulate how you see life, and you can react in your own way. And you have to find your personal style, your way of thinking, and your point of view. That was my goal.

Was it your decision to close it?

No no no, it wasn’t. It was part of a private university and the private university has a goal for benefit. And the last half-year was a kind of hell for me, because to go every day to the director, who is asking me “where is our profit,” because of course my young people weren’t capable of paying the tuition and we wanted to shoot all the time. By the end they decided I had to leave. Plus, you know, even if we were registered as a kind of faculty of this university, I had trouble all the time with the curriculum and these kinds of stupid things because it was based on the workshops and personal work.

With the workshops I invited some friends, like Apichatpong, like Carlos Reygadas, Pedro Costa, Guy Maddin, Gus Van Sant, a lot of guys came. Tilda Swinton, Juliette Binoche, and Gael García Bernal—because I invited actors too, not only filmmakers. I invited philosophers. Because you had to see how big the planet is and how we are different and how our power is in our differences and this was the goal. And how can I write in the curriculum today: “Apichatpong will go with them to the forest for meditation”?

And fuck! Gael García Bernal created a football team and they were playing with the Sarajevo street kids and, fuck, they lost all the time. The street kids were way better than my fucked-up filmmakers. But how can you write this in the curriculum? You have to learn the life and then you are transforming yourself and sharing with the people. This is the real filmmaking. To learn it, to learn “filmmaking,” is stupid. But to learn the life, it’s reasonable, because afterwards the way of the filming will find you. It’s true. That’s why my school was a little different than the other schools. That’s why I had some trouble. But in the end it was wonderful because those guys made some really good stuff. They’re appearing slowly in the world.

Your old assistant László Nemes is doing very well. Have you seen Sunset?

I haven’t seen Sunset. You know, I’ve done 35 years of this fucking film shit. I just want to protect them, not to do any stupid things. They can take risks and they have to be brave. This is the main issue. I want to be with brave people. The other people are very boring for me. I hate the conformists.

Do you still watch a lot of movies?

Less and less. Of course I am watching some of my friends when they do something new.

You mentioned that Gus Van Sant was one of the visitors to your school. Some people say his use of long takes was directly influenced by your work.

Yes, he came to Sarajevo three times. Long takes… you can do it, everybody can do it. It’s not a big deal.

They’ve become quite ubiquitous now; I’m just interested in what you think about it.

I don’t like to speak about my colleagues’ work. Because we are different. He’s doing it his own way. We have a different cultural background, different social background, we have different history. I cannot measure his work to my way, because it’s so stupid. Primitive. You are a very stupid person if you say this is good or this is bad. It’s up to you. I’m not sure if you are right but you have a right to do this. That’s why I never do.

I saw your installation in the EYE Filmmuseum in Amsterdam a couple of years back. It was incredibly moving. Would you be interested in doing more of this kind of work?

Yes, I loved this very much and it was a big joy to do. Now I’ve just started a project in Vienna for the Wiener Festwochen. There is a cultural festival with theaters, music, dance. I will do a kind of performance which is a mixture of the theatre, installation, motion picture, plus live music. It’s a kind of, I don’t know what, but I’m preparing now and will start work on it. We have only six performances, six days. Just in Vienna in mid-June.

Is there a theme?

I don’t want to say anything yet. First I want to do, then afterwards I don’t care, but before not. Because in this case, why am I even doing it? Do you ever feel an itch to make movies again?

No. I am doing a lot of things. I’m not bored and I’m not retired and I still want to go ahead. I think, after The Turin Horse, I cannot say anything. It was about the death of everything. The work is complete. Done.

Do you think cinema still has the same cultural significance?

Until the human being stops existing, I think yes.

Regardless of the format?

Go and shoot something with your phone and find your own way and that’s all. Who cares? Fuck off this shitty film industry. Fuck all those guys. Fuck off the market. Because now you have a different way and the technology is different. Everything is different. You don’t need money now to do the perfect movie. Let’s say “perfect motion picture.” For me, this digital stuff is not the film. It is a motion picture, but different. You can express yourself. You can express your emotions. You can say everything.

You were involved with the Sarajevo Film Festival for a while. Is that something you would consider returning to?

I was doing a lot of things for them. I was president of the jury, I got a lifetime achievement award, they had my tribute. I was living there so of course I had a strong connection with the people, but I don’t know. For me, the festivals are less and less important because I’m out of this business. I’ve been to all the festivals in my life and to go somewhere and meet the same people all the time and talk about the same topics all the time. It’s somehow getting boring.

And answer the same questions from people like me.

[Laughs] Yeah, yeah, yeah… and you know what? When you get older and older, the subjects are getting more and more simple and, by the end, you’re just talking about your medicines and your blood pressure.

Not much anymore. Not much.

The restoration of Sátántangó screened at Berlinale and opens on October 18 at Film at Lincoln Center.