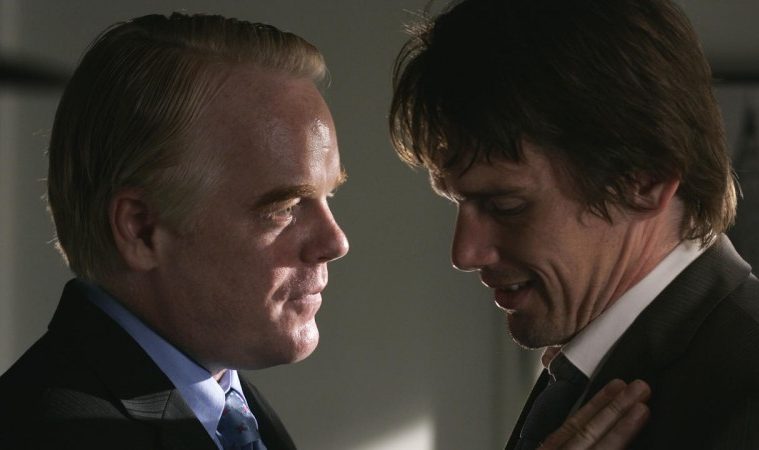 A strip mall in Westchester looks like a strip mall anywhere else in America. The signs over each business even have the same nondescript font. A masked man storms into a mom n’ pop jewelry store (who knew there was such a thing?) and demands the wares. While he’s distracted, the elderly shopkeep pulls a gun and plugs him. He shoots her back, and then she shoots him again. This all takes around one minute to happen. Later, Before the Devil Knows You’re Dead revisits this scene, from the point of view of the driver outside the store waiting for his accomplice. This time it’s less than ten seconds, collapsed into three cuts. We only hear the gunshots, the camera trained on Ethan Hawke’s reactions, the slowness of its zoom in on him jarred by the edits. Pop. Cut. Pop. Cut. Pop. This is Sidney Lumet’s brutality. He ended his long career with the cinematic embodiment of executing a hapless bystander.

Good storytelling often entails making the inevitable compelling, and in the realm of crime stories, this often takes on an additional tragic dimension. This genre is a parade of doomed protagonists, done in by their hubris, foolishness, lust, love, poor luck, fate, or any combination thereof. Simple plans always domino into chaos. Hawke’s character was supposed to rob the store alone, with a toy gun. His parents’ doddering employee was supposed to be running the place, not his mother. His partner was supposed to be a professional. There shouldn’t have been a gun in the drawer. Next thing you know, half the cast is dead. The film punches through each story beat with ruthless serenity. A drug fugue, a murder, and a spousal shouting match are afforded equal treatment: a cold camera which neither judges the characters nor detaches the audience from their anguish.

Before the Devil Knows You’re Dead scatters its narrative across its timeline like bullet spray, continually recontextualizing what we’ve already seen through new foreknowledge, or revelations of what comes after, or a new perspective of the same event. The disintegrating fortunes of the Hanson family are made palpable in the fractured chronology. It’s like seeing the mindscape of a frayed man pushed off the brink, reduced to muttering How did this happen? to himself over and over. That we see everything out of order does not detract from the clear throughline of events spiraling out of control.

Kelly Masterson’s script ties its protagonists’ conflicts to middle-class malaise, emptiness, and resentment. Coming out on the eve of the financial collapse, the film’s depiction of familial bitterness bred by financial success without interpersonal guidance unwittingly foreshadowed how all conventional notions of the American nuclear family were about to implode. Charles and Nanette (Albert Finney and Rosemary Harris) are the archetypical self-made small business owners. Their son Andy (Philip Seymour Hoffman) is a real estate executive. But any stability is illusory. Andy hates his father and has embezzled funds to support a drug habit. Younger brother Hank (Hawke) is bitterly divorced and can’t manage child support, all the while fucking Andy’s unsatisfied wife Gina (Marisa Tomei). The real estate market is about to burn. When we see the family attend Hank’s daughter’s school play, we’ve already seen Nanette mortally wounded. Their genial front can’t even be considered a front; we already know the rot beneath.

The film opens not on the ill-fated robbery, but with Andy and Gina having sex. It could be the beginning of any number of domestic dramas which came out in the heyday of indie/mainstream hybrid films during the 2000s. The difference is that where a normal THINKfilm or Capitol Films release would have characters’ resentments build into shouting matches, here they build into shouting matches and then people getting capped in the temple. Andy’s simple plan to get the money he needs to abscond to Brazil and escape getting caught for his embezzlement is also meant as a definitive “Fuck you” to his father. (He even planned to fence the jewels through a dealer his father’s known and disliked for decades.) There’s no line between familial dysfunction and criminal madness here.

This conflict explodes from the performances, note-perfect down to the smallest role. Hoffman is haunting here, the apotheosis of every miserable, pitiable fuckup he ever played, its resonance magnified to an uncomfortable degree by the circumstances of his later death by overdose. (For a real head trip of unintended future subtext, this finance guy gets his heroin fix at an apartment in Trump World Tower.) Hawke is the perfect crime movie faux-innocent, perpetually in over his head and hapless. Tomei is heartbreaking, in almost every scene playacting normalcy for the sake of whomever she’s with. Finney is somewhat terrifying, a man hollowed by grief who gradually reveals that there was little warmth there to begin with. Perhaps no one exhibits the film’s tone better than Michael Shannon in a small bit as the blackmailer Dex, who conducts his extortion in a no-frills, menacingly businesslike manner.

Before the Devil Knows You’re Dead is the kind of film that leaves the viewer scooped out when it finishes. After a father kills his son — one final mythic, taboo-breaking act of violence — it closes with a dissonantly gentle fade to white. There’s only one way to end the misery of family. In lieu of reconciliation, all one can hope for is a clean getaway.