Army of the Dead Review: Zack Snyder Indulges in the Best and Worst of the Zombie Genre 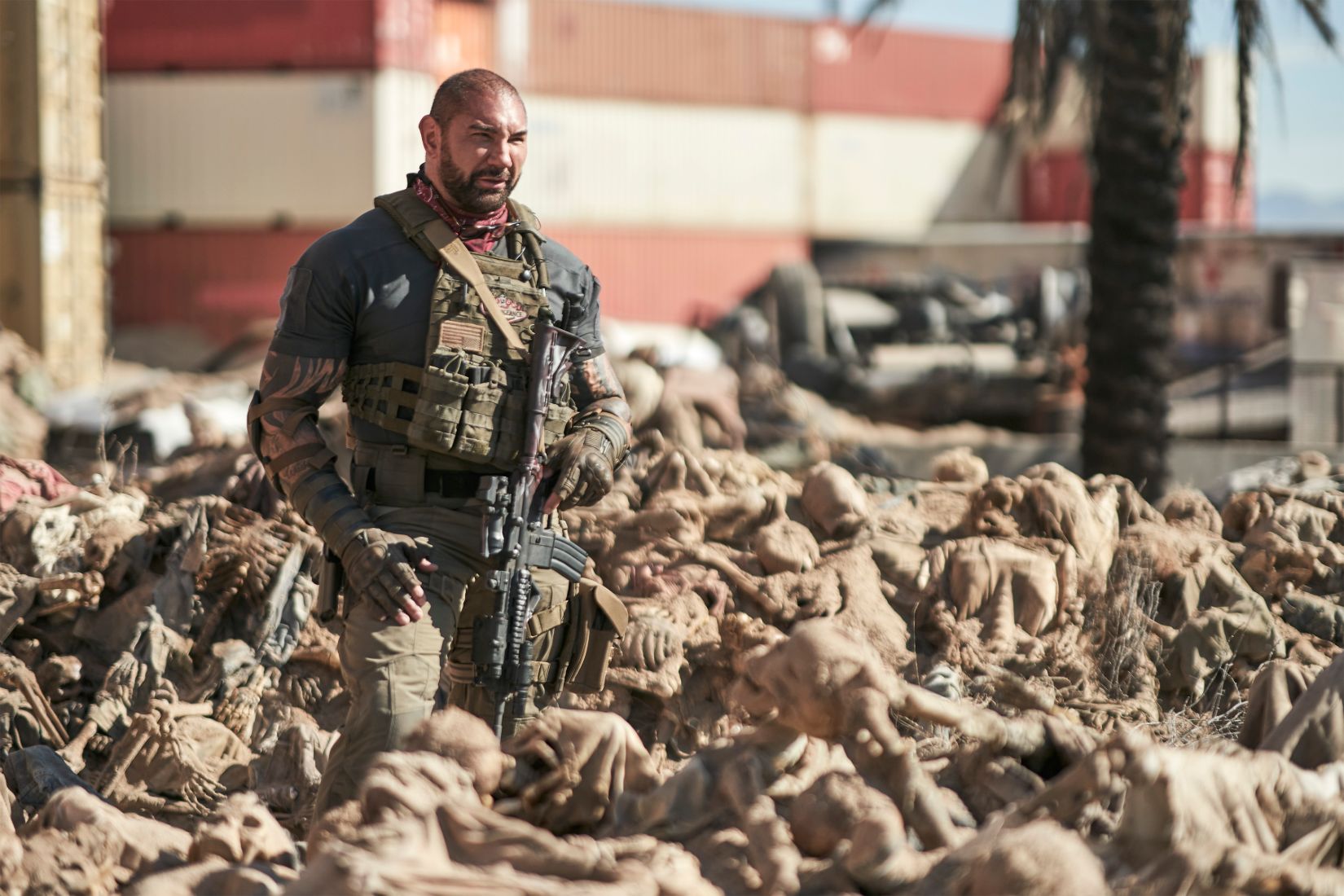 It seems strange to call a Zack Snyder movie nostalgic. Over the last decade the director has spent all his energy operating within the superhero industrial complex, dunking his caped crusaders into the same slow-motion, washed-out dye that defines his grand and mythically inspired aesthetic. Snyder’s spectacles repeatedly grapple with the burdens of power and sacrifice on a global scale; they depict heroism soaked in a bath of self-seriousness and hypermasculinity. It’s a water weight that comes with the price of admission. Which is to say Snyder’s movies—from the blood-spattered murals of 300 to his cult-backed, four-hour Justice League director’s cut—have become rather predictable affairs, blurred together by their sepia-toned iconography and brooding subject matter.

But Army of the Dead, his new zombie-heist, Netflix-produced carnival ride, offers something of a callback to the filmmaker’s monster-genre roots. For the first time since his Dawn of the Dead retread, Snyder livens up the frame with a more expansive color palette and localizes his stakes to a group of diverse mercenaries lacking any superhuman skills. He even follows the early blueprint of his 2004 adaptation, which opens with a frantic zombie attack and quickly pivots into a montage explaining the origins and scope of the epidemic. After all those years building out worlds of comic-book proportion, Snyder’s latest tribute to the undead feels like an emergence from hibernation.

At least for the first half. Army of the Dead begins with a fireball as a military convoy carrying a top-secret governmental asset crashes into a newlywed’s car (thanks to some shotgun shenanigans) on a Nevada highway. It doesn’t take long for the caged monster to escape its confines and bite through the group of petrified soldiers responsible for its transport. With a small army of infecteds, it quickly begins terrorizing Sin City, and Snyder pivots into an opening credits sequence featuring zombie showgirls and Elvis impersonators unleashing carnage atop a goofy cover of “Viva Las Vegas.” Amidst the gory battle, in which a few protagonists show off their gun skills, military members fight off the zombie feasting, directing missiles down the strip and fatefully parachuting into throngs of outstretched, ghoulish arms and mouths. It’s a devastating and hilarious mashup of slow-motion events, the kind of stylistic, head-shaking exposition a movie like this deserves. Some well-placed ship containers ensure downtown Las Vegas is walled off, keeping the zombie population contained inside a playground of torn-down casinos and hotels.

Unlike Dawn of the Dead, which focuses on staving off the zombie outbreak itself, Army of the Dead is interested in the traumatic rubble years later. For Scott Ward (Dave Bautista), who survived that Vegas bloodbath and saved the U.S. Secretary of Defense, that’s meant flipping patties at a local burger joint and coping with the death of his wife, who he was forced to murder after she’d become infected. Her passing has distanced him from his daughter, Kate (Ella Purnell), a volunteer at a refugee camp outside Vegas’s quarantined walls, where security guards perform abrupt temperature checks and a “coyote” (Nora Arnezeder) helps desperate civilians cross into the city for supplies. The landscape is dystopian, and Snyder has fun showing off his contemporary political cards.

Stakes quickly come into focus when a Japanese mogul, Tanaka (Hiroyuki Sanada), petitions Scott to retrieve $200 million sitting in his casino’s high-grade vault. With only a few days until the President authorizes a low-yield nuke to destroy the entire city—and a hefty reward promised for his services—Scott begins assembling a team of sharpshooters. That includes a mechanic (Ana De La Reguera); a chainsaw-wielding soldier (Omari Hardwick); a cigar-chewing chopper pilot (Tig Notaro); a viral YouTuber (Raúl Castillo); and an expert safe-cracker (Matthias Schweighöfer). Tanaka’s own head of security (Garret Dillahunt) also tags along, as does Kate in an attempt to find a lost refugee, adding some wrinkles and cliched suspicion to the group’s death-trap mission. It has all the makings of a lean action-thriller. What could go wrong?

Upon entering the city, the group learns the lay of the undead land—in this kingdom, there is a hierarchy led by alpha zombies that can run and react quicker than the average monster. They’re more in the vein of World War Z than earlier incarnations. In one scene the group makes a human sacrificial offering and Snyder ratchets up the tension—his cinematography attracts digital splatters of blood onto the lens—enough to offset the bizarre presence of a zombie tiger that allegedly belonged to Siegfried and Roy. It’s a ludicrous throwaway clarification, one that fits comfortably among the movie’s other Snyder-appointed references, including the Four Horsemen of the Apocalypse and a Joseph Campbell name drop.

Old habits die hard, of course, and at nearly 150 minutes Army of the Dead takes plenty detours that become dead-ends. Perhaps a symptom of Netflix’s notorious hands-off oversight, Snyder’s movie eventually loses its screwball urgency as zombies begin picking off Scott’s team and the mission runs into its predictable share of turbulence and action-flavored shlock. In the midst of Scott and Kate working through their relationship, a heaviness creeps into the frame from which the movie never recovers—mostly because the rest of the team struggles to acquire a genuine, comedic camaraderie. You can sense Bautista making the best of Snyder’s father-daughter formula, but pacing feels off. And the script, which Snyder wrote with Joby Harold and Shay Hatten, settles into mechanical plotting that undercuts all the zany, pop energy that began its trajectory.

That’s liable to happen when you spend just as much time exploring the dynamics of your zombie population. Snyder has always been more interested in image-making (there are a couple more memorable panoramics here), and with the hyper-descriptive CGI renderings at his disposal, the director’s humanity-driven subplot involving a zombie king and queen functions as an easy indulgence. It’s what separates his work from George A. Romero, who was more fascinated by the human beings trapped in these terrifying situations, and used them to provoke unsubtle allegorical critiques of mass consumerism and military destruction. Aside from a Sean Spicer cameo and hints of a toxic, Trumpian culture (at one point, the president is quoted saying it would be “cool” to nuke the city on the Fourth of July) built on greed and individualism, Snyder never engages more than a nod. It doesn’t feel enough.

It’s the frustrating part about watching a Snyder movie: he serves steak and makes the garnish pass for a side. This movie should have been dessert for all three courses. You watch Bautista sprinting over blackjack tables firing his machine gun through wads of cash falling over a massacre of flesh and bones—the real money shot—and wonder why Snyder felt compelled to coat it with such a gloomy finish. At this point, it’s probably muscle memory. By the time the final, melancholy (though hilariously on-the-nose) needle drop begins enveloping the epilogue, Snyder has almost made you forget that his zombie outbreak story began because of a blowjob.

Army of the Dead is now in theaters and arrives on Netflix on May 21.