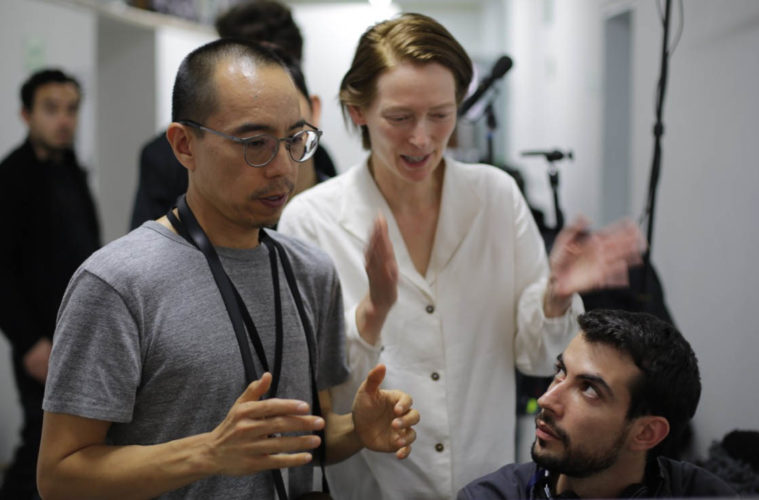 Despite being a beloved figure on the international film circuit, Apichatpong Weerasethakul has mostly stayed in his own realm, crafting his dreamlike odysseys with a Thai cast and crew. For his next film, Memoria, he is casting a wider net, collaborating with the goddess Tilda Swinton, along with French actress Jeanne Balibar, Zama star Daniel Gimenez Cacho, Juan Pablo Urrego, and Elkin Diaz. With production beginning earlier this month in Colombia, it also marks the Palme d’Or-winning director’s first film shot outside Thailand.

Courtesy of Match Factory (via Variety), the first on-set images and a new synopsis have been unveiled:

In the film, Swinton plays an orchid farmer visiting her ill sister in Bogota. While there, she befriends a French archaeologist (Balibar) in charge of monitoring the construction project and a young musician (Diaz). Each night, she is bothered by increasingly loud bangs which prevent her from getting any sleep.

“During the 70s and 80s, it was very violent [in Colombia], much more than now… when you were driving, there could be a bomb and sometimes the traffic stops and you don’t know [why],” the director said last year. “People imagine things and have a fear. The movie is about this, waiting for something you don’t know.” He added that the romanticized jungle stories set in Thailand from his childhood had inspired the film, saying “Colombia is an active landscape. There is a volcano, there are landslides, earthquakes, coal mining, tunnel instruction.”

Check out more images below, one of which confirms cinematographer Sayombhu Mukdeeprom (Call Me by Your Name, Suspiria) is reuniting with the director after having last worked together on Uncle Boonmee Who Can Recall His Past Lives.

Memoria will likely premiere at the 2020 film festival circuit.