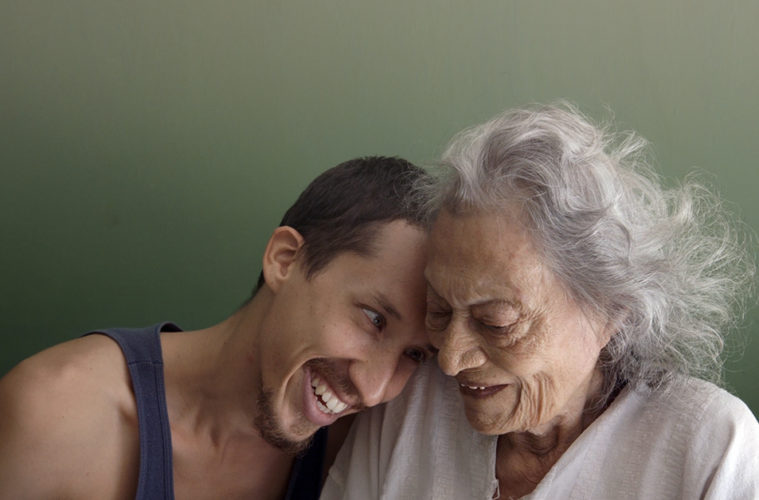 My grandmother ignited my love for the movies. When I was four and spent most of my days in her home, she made sure there was always a fresh stack of videocassettes for me to choose from. I was obsessed with Dumbo, often tried to reenact the flying scenes in Peter Pan, and I loved Bambi so much that I memorized the dialogues. It’s how I learned to speak English. In my early teens, she delighted me with anecdotes of her life in Florence, where she went to college, and told me the story of a sex worker with a heart of gold who always found the silver lining; her name was Cabiria. Mi abuela introducing me to Fellini by way of a fable.

Aware of my passion for writing about film she encouraged me to leave Honduras, my home country, to seek my dream abroad, telling me one day we’d be together in New York City like Audrey Hepburn and George Peppard in Breakfast at Tiffany’s. She warned me not to smoke in front of her though. Shortly before I left Honduras to go to film school in Costa Rica, she was diagnosed with Alzheimer’s. My goodbye to her is the one I remember most vividly.

Every time I came back on school breaks I met a different version of her. As her memories faded she would become a little schoolgirl asking me to sit with her and wait for her mother to pick her up, sometimes she was a flirty 20-something asking me to take her out to dance, at times she became a frightened woman who told me she needed to find her way home, even though she sat in the house where she was born eight decades earlier.

Whenever I went back to school I promised myself next time I would return with my camera and capture all her stories, preserve her fleeting memories digitally. Eventually, she no longer recognized me, and would sometimes address me as “sir,” and needless to say so I never fulfilled my promise of bringing my camera.

But for a moment, watching Erick Stoll and Chase Whiteside’s documentary América, I could’ve sworn they had done what I failed to do. They had brought my grandma back to life.

Their bittersweet music box of a film is enamored with its title character, a 93-year-old Mexican woman caught in an unwilling limbo. Her son has been sent to prison for failing to take care of her, elder neglect, leaving her unprepared adult grandsons to look after her, perhaps in the same way she looked after them when they were children.

One of them, Diego, has been living in Puerto Vallarta where he works as a street performer and surfing instructor. Upon hearing the news of his grandmother’s condition, he returns to his hometown, Colima, where he not only has to see his beloved América vanish before his eyes, but must accept his part as the prodigal son and face the resentment of his brothers Bruno and Rodrigo, who he also abandoned.

Stoll, who also served as cinematographer, allows his camera to become an ethereal presence. Neither nurse nor invader, his sensitive lens captures the family at its most intimate moments. Scenes in which Diego lies in bed with América telling her how beautiful she looks, have the tenderness of a lullaby we remember hearing in our cribs, but can’t remember the words to.

Moments of conflict between the brothers are shot from the angle of an impartial observer, who waits for the fire to go off before coming any closer. Moments of sheer love between the three come in the shape of magical scenes in which they display their expert acrobatic skills–something almost out of Fellini.

But there is also heartbreaking hope in scenes like the one in which Bruno pleads with his grandmother to walk. Holding her shoulders to show her she is indeed standing up and should just try giving a step forward, the camera almost conveys the eagerness of someone convinced that miracles can happen and América can be healed.

What impresses is not necessarily the naturality with which the family acts in front of strangers. After all, people from Latin America are used to the unwanted presence of white Americans, who have influenced our politics and economy for the better part of a century. The truly remarkable element in América is how the two Ohioan filmmakers allow the culture to wash over them, never attempting to overexplain or overanalyze. The film brims with so much empathy it almost aches.

Stoll and Whiteside co-founded New Left Media, a production company that specializes in activism through short films. In 2015, they told the story of a young undocumented man working in a Trump property, and although their home country didn’t pay attention to their sensitive approach and chose to make the reality TV star president, the filmmakers’ rightful indignation in that short film has given path to something that feels even more miraculous: a completely open heart.

Perhaps in the frail woman fighting for her life, they too see the devastation of their country and wonder if it can ever become a beacon of hope, if it can ever be restored to the glorious promise of its youth. Maybe in Bruno’s pleas for América to step forward they too saw a glimmer of optimism. If their América can, maybe so can ours.

Layered within the film are also harsh truths about the way in which we care for our elders, the injustices of a socioeconomic system rigged to assist only the rich, and existential observations on the nature of life and the cruelty of dementia. I too wondered if my grandmother was my grandmother if she no longer knew me. A confession I’m ashamed to write.

The wisdom of Stoll and Whiteside’s América is that it may not have answers but it dares to observe and listen. As Diego sits with his beloved abuela showing her a picture of the two of them taken twenty years earlier, reminding her they have been “friends” for a very long time, the filmmakers convey a shattering emotional truth; América’s wrinkly pointed chin is also Diego’s. Her elegant nose out of a Picasso painting is Rodrigo’s. Her childlike eyes, Bruno’s.

She may not remember her grandsons, but they were made from the same flesh and blood, sculpted from the same cinnamon earth from which the Colima Volcano rose thousands of years earlier. And like the volcano that watches over their town, their grandmother too will forever be part of who they are. They too are América.

América opens at Museum of the Moving Image on September 13 and comes to PBS on October 7.