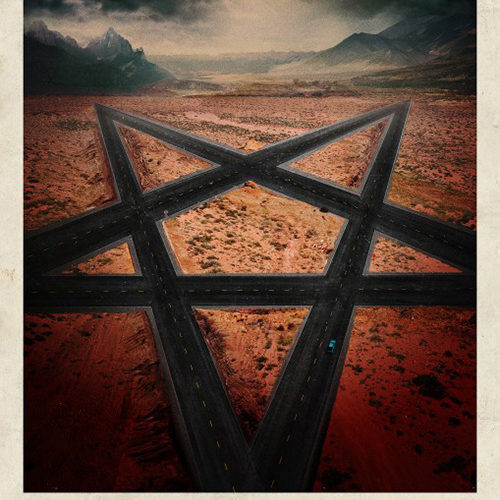 The V/H/S series has crashed and burned badly, but producers Brad Miska and Roxanne Benjamin have moved on to a different anthology of horror shorts, now joined by a new cadre of collaborators. Four directors (Benjamin, fellow V/H/S veterans David Bruckner and Radio Silence, and Patrick Horvath) have spun out the five different scary stories which make up Southbound. But whereas many anthologies are united only by a theme, these segments share locations and cross over certain characters, all within the same vista of an undefined stretch of desert in the American Southwest. This, however, does not result in any appreciable improvement over generic indie gore-mongering.

The various protagonists of Southbound are all either looking to right a past wrong or carrying deep-seated guilt over an old sin. The nameless desert is some kind of hell (the only even marginally clever part of the film is the double meaning of its title) existing in parallel to the “real” world. A roadside motel may be an inescapable pit of torment for one character, but just a shitty place to spend the night for others. Some demonic beings come to collect on deals mortals have struck with them, while others essentially troll people. The movie shifts gears with each section — one’s a slow chase, one’s a home-invasion thriller, one’s a gross-out fest, etc. This hodgepodge encourages some variety in the world-building, but, to the littlest detail, it’s derivative — and, worse, not scary.

It’s not even worth reviewing each segment individually, so uniform are their shortcomings. Despite having their own directors, cinematographers, and editors, they all look and feel identical. Likewise, the acting is, without exception, horrendous. No one can even scream out a convincing “what the fuck,” much less look afraid of a few cultists — or be effective cultists, for that matter. The sound design is overbearing, where every door is slammed shut and every footfall is a crunch. The audience is endlessly nudged with reminders that they should be thrilled by this.

The short format is presumably attractive to horror filmmakers because it lets them get setup out of the way as quickly as possible before jumping to “the good stuff.” These directors have taken it as license to rush plots into full-on incoherence. But then the plots are all excuses for pulling out jump scares or open wounds or whatever might make a midnight audience whoop. At its best, the undiluted sociopathy of horror-movie enthusiasts allows for filmmaking at the most elemental level. At its worst (this), it leads to a cavalcade of ugliness that isn’t even morally risible because it’s so predictable and boring. Of course no one makes it out alive. Of course the fates are senseless. Of course the blood flows freely.

Southbound is aimed at viewers with low standards for “WTF”-ness in cinema and a love of decent gore special effects. It’s practically pre-sold to work a genre-film-festival circuit before attempting to make a profit through VOD. For literally anyone else — really, even for the fans — it has nothing.

Southbound played at AFI Fest and will be released on February 5th.