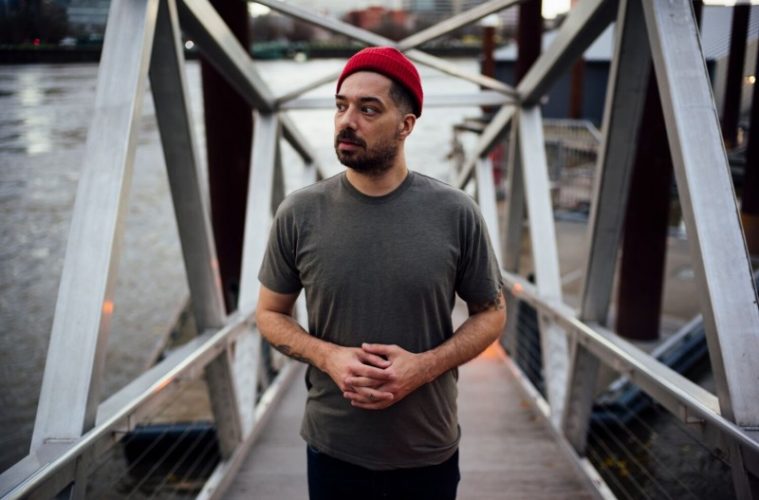 For his first-ever film score, hip-hop artist Aesop Rock provides an exhilarating beat-heavy backdrop to Bushwick, the thriller directed by the Cary Murnion and Jonathan Milott, and starring Brittany Snow and Dave Bautista. “The score is gritty, emotional, unnerving and triumphant, taking us on a journey as we weave through the streets of Brooklyn,” the directors note. We had the opportunity to speak with Aesop Rock about scoring the film and bringing an added level of intensity to the thriller.

This movie was intense, following the amazing music in the opening credits, the film was void of music for more almost 20 minutes. Talk to us about some of the discussions that limited the music.

There were many phases. There were times when there were stripped-down drums playing in some of that stuff, and various other pieces were tried. I think ultimately their decision to leave the top of the movie somewhat bare works as a tension-builder. Tension happens when you’re waiting for something that’s taking just a little too long to happen. By the time the music is in there, shit’s all f’d.

Bushwick is an intimate thrill ride and the beauty of the film was that is felt like one long sequence (thanks to the seamless editing and fantastic choreography). How did the pace of the story and the tone help you with the themes?

I knew from the script that they were shooting it as one long sequence. They would send me these long shots as they were filming. I was just trying to make sketches, find the right mood for each moment, and then decide with Cary and John if it felt like more of a backing mood piece, or something more syncopated with what specifically was happening on the screen. But the fun thing about the movie is that plot-wise it already has a ton of momentum. They are here, they need to get there, these are the obstacles. It’s all forward motion, which informed the music.

Being that this is your first score, you now get to call yourself a “film composer.” What were some of the biggest hurdles and challenges?

I was just nervous. I wanted to do a good job and had all these doubts swirling around in my head. I certainly had a meltdown at least once or thrice. There were just moments when I was thinking, “Man, this is outside the realm of what I even know how to do.” I worried that I wouldn’t be able to get as grandiose as something like this requires. Some of the later scenes are really unlike anything I have put together, running through tempo and key changes, stops and starts, etc. it’s a lot different than making a beat to rap to — which is most of what I’ve done.

What was the first thing you clued into when writing this music, and did the input from the directors Cary Murnion and Jonathan Milott help or change the way you worked?

After I read the script, I quickly started making scraps and sketches of things that I felt matched how I was envisioning the movie in my head. In the beginning there was a “yes” and “no” pile, well before we knew what would go where. The input from the directors was amazing – I needed guidance and they were there. They are familiar with my music so that really helped, they knew what I could do, and their requests were always reasonable. It is a different way of working for sure, the goal is different, and the process adapts to a lot of the trial and error that has to occur.

I know you have a career as a musician, but I have to say that the film and the score came across like collaboration between seasoned professionals – like Tony Scott and Harry Gregson-Williams – so how comfortable were you with the project? What were some of your concerns coming on board originally?

I was mostly concerned with the fact that I had never done anything like this. My music is primarily lyric-driven, and while I have produced much of my own stuff since the 90s, I don’t put myself out there as a producer really. I make what works for my rapping and that’s about it. But really, Cary and Jon were amazing the whole way through, and talked me off a cliff a couple times.

What were three of your favorite cues/tracks?

Ah, cues what you call songs in this world? [laughs] I like “Corner Store”, “Jaguar”, and…I’ll say “Riot Riot” only because that was sort of the last piece we worked on, and it required extensive tailoring to hit the cues. I felt pretty free – they had a list of songs I had produced previously, and I felt like they knew what I did and what my strengths are. It was just a matter of finding our groove and what sounds they wanted in the movie. Most of it feels like it have my signature on it though. I definitely didn’t feel pulled to make songs that aren’t my norm.

Beyond the themes in the script, some composers build a theme around a noise, rhythm, or something evident in the film. What do/did you draw from?

For the most part I just wanted everything to move. Forward momentum descending into chaos. I was certainly drawing on the vibe and plot of the film more than any particular sound. It was all bursts of action mixed with intense scenes of creeping and hiding. A lot of stop and start.

Recently, I spoke with Brian McNelis (Senior VP of Music at Lakeshore Records), and he thinks your work is phenomenal. He described it to me as, “imagine DJ Shadow scoring The Warriors.” Who were your influences for this film, both musically and cinematically?

At this point I’ve been producing music for 20 years, so while obviously I have influences, I don’t know that I can name specifics. I do love the Warriors so that’s a good take. I think a couple times I may have gone too far in that direction, vintage synth arps and stuff like that. I had to be reeled in slightly. But knowing what songs in my catalog were specifically inspiring for them was really the most help.

I have to agree with Brian, and I want to hear more of your work in films. What’s next for you?

I’ve been working on an upcoming film Infinity Baby directed by Bob Byington. That’s just about done. I also have a few lyric-based projects on the horizon. Mostly just keep working, and see what comes down the line.

Bushwick is now available on VOD and in limited release. Listen to the score above.