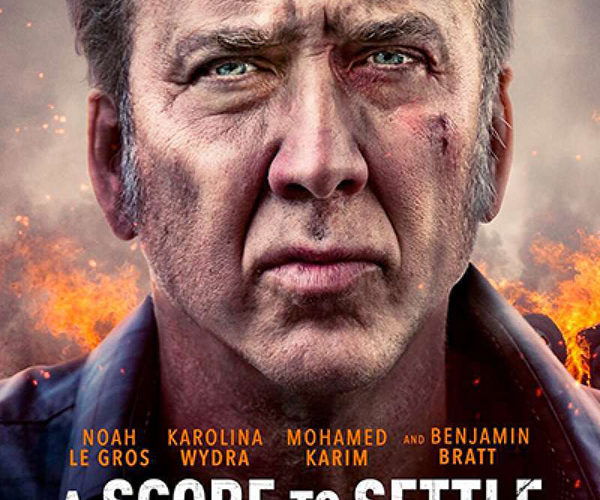 ‘A Score to Settle’ Review: Nicolas Cage is on a Path of Retribution

It’s been nineteen years since Frank “Frankie Fingers” Carver (Nicolas Cage) has been a free man. He’s made the best of prison despite being there for a crime his mob boss Max (Dave Kenneth MacKinnon) committed. What other choice did he have? With his wife dead, his son (hopefully) a reformed junkie, and his money buried behind a home he no longer owns, there wasn’t much else to do but try and enjoy what little control he had over what was left. And since he was serving a life sentence for murder, it would of course mean one more tragic circumstance to earn this long sought after day in the sun. Rather than exoneration, Frank has been given clemency as a result of his own mortality. He’s dying. Director Shawn Ku and co-writer John Stuart Newman tell us this very matter-of-factly with a visit to the doctor on the day of Frank’s release. It’s a degenerative disease leaving him an insomniac and thus preventing his brain from rest. The lack of sleep will subject him to hallucinations as dementia sets in before finally succumbing to the inevitable. So how should he spend these last days? Hang out with his son (Noah Le Gros’ Joey) or plan revenge on the men who left him to rot? Since a title like A Score to Settle works with both scenarios—he has as much to answer for with the boy he abandoned as those who forced his hand do with him—why not kill two birds with one stone?

This journey starts as a pretty effective drama pitting a father trying to make amends against a son who isn’t sure whether to let him. Frank is desperate, though, and condenses two decades of presents into a couple days thanks to the aforementioned money procured on their way back home. While a fancy car, new suit, and expensive meals at a five-star hotel can help break the ice, it can also set the two up for an even greater fall if proven to be for nothing. The more attention showered upon Joey, the greater chance the boy realizes his dad is disappearing each night for increasing periods of time. And as Frank discovers he’s no spring chicken anymore, the evidence of those extracurricular activities won’t remain hidden. Vengeance goes through the one guy he can still trust: Q (Benjamin Bratt). Despite being on the straight and narrow with a successful bar and a daughter’s wedding on the horizon, this connection to the past is all Frank has. A detail here or there can work towards finding addresses on Jimmy (Mohamed Karim) and Tank (Ian Tracey) with his singular desire to kill both driving him to combat whatever comes his way in the process. How long will Joey stay with him as this bloodlust takes hold, though? The dam has to eventually break and when it does Frank’s disintegrating mind won’t be able to connect enough dots to make it out. He’ll have to choose his path forward and live with the unavoidable pain and regret.

I wish this were the extent of Ku’s ambitions with A Score to Settle since it does begin as a nice reprieve from the usual unhinged Cage-ness his lead actor has unleashed upon screens of late. Cage’s Frank wrestling with his emotions and failing to fully win Joey over is effectively portrayed and enough of a through-line to carry us out of the gangster retribution subplot once more revelations are exposed. And the potential to open things up with secondary characters like a prostitute who takes an inexplicable shine to Frank (Karolina Wydra’s Simone) and her obnoxious pimp Trip (Sean Owen Roberts) is there to capitalize on. Ku and Newman would rather cut that bait loose, however, and let Cage go wild instead. It’s a jarring tonal shift. We therefore care for Frank and his predicament only to watch him stumble home devoid of the patience he so beautifully showed Joey. The vendetta simply isn’t as interesting as his familial strife and this trip into over-the-top performative carnage doesn’t resonant like the complexity born from his restrained father/son relationship. To promise the latter as the focal point only to pull a reversal right when things were coming to a head proves an unforgivable move made worse by an attempt to rein everything back in later via a discovery whose intellectual fit can’t overcome the damage wrought by the journey there. In kind, the awkward handling of Simone as a point of reflection for this truth can’t stop from feeling like a loose end being tied off.

It’s too bad because Ku’s ideas are sound. How Frank’s redemption and revenge are intertwined is well thought out enough to support the narrative choice to flip some things on their head, but the execution falls short thanks in part to the devolution from contemplative drama to unbridled shoot ’em up. Simone could be excised completely without losing anything but the prospect of a red herring I believe arrives unintentionally anyway and the reality of where Frank should put his sights is hardly a surprise. This wouldn’t matter if that identity didn’t steal the script’s attention and make itself more important than the rest. It’s okay to know what’s going on early if it’s but one piece of the whole. It’s frustrating when it ends up being everything.

A Score to Settle hits limited release and VOD on August 2.