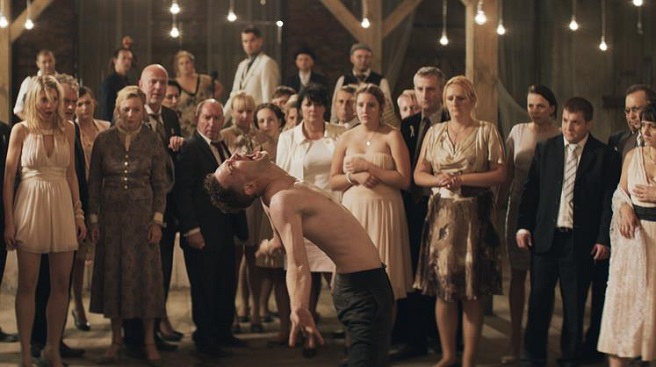 I saw Marcin Wrona‘s Demon under what I’d consider ideal circumstances: as a blind viewing at the tail-end of last year’s Camerimage Film Festival, by which point I was a bit delirious from the week’s workload and, most of all, the jet lag that had never quite faded away. And so what, to me, was rather clearly a unique take on the demonic possession story grew all the more odd and terrifying as a result of my half-closed eyes and open mind. Total surprises are hard to come by in even the best of films, even though its wheels were a bit greased — and the experience is what it is.

I’d guess these are not the circumstances under which The Orchard would prefer you see their new release. Regardless of how the viewing happens, make time for Demon despite the extent to which a U.S. preview undersells the appeal of Wrona’s picture, which is actually driven by (and thus fully exploits) the absurdity and calamity of its central set-up. Heck, just go in blind and let the rest unfold.

Newly arrived from England to marry his fiancee Zaneta (Agnieszka Zulewska, Chemo), Peter (Israeli actor Itay Tiran, Lebanon) has been given a gift of her family’s ramshackle country house in rural Poland. It’s a total fixer-upper, and while inspecting the premises on the eve of the wedding, he falls into a pile of human remains. The ceremony proceeds, but strange things begin to happen…During the wild reception, Peter begins to come undone, and a dybbuk, the iconic ancient figure from Jewish folklore, takes a toehold in this present-day celebration—for a very particular reason, as it turns out. The final work by Marcin Wrona, who died just as DEMON was set to premiere in Poland, is part absurdist comedy, part love story that scares, amuses, and charms in equal measure.

Demon will enter a limited release on September 9.