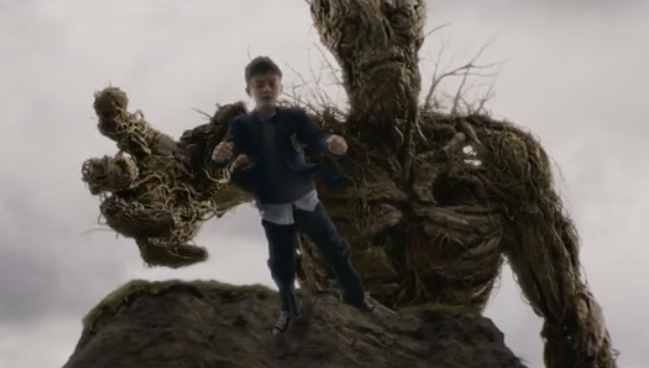 Before he tackles massive dinosaurs in the Jurassic World sequel, director J.A. Bayona (The Orphanage) is handling a different type of beast with A Monster Calls. When a boy’s (newcomer Lewis MacDougall) mother (Felicity Jones) gets a terminal illness, the young lad seeks solace and reconciliation from a massive tree monster (no, not Evil Dead style — I hope) who is voiced by Liam Neeson.

The first full-length trailer features sweeping imagery and a darker tone and color palette — along with Neeson’s monstrous growl — that strongly suggests this is a darker entry into the child fantasy film than something like the upcoming Pete’s Dragon or Spielberg’s The BFG. It’s lensed by Orphanage DP Oscar Faura, who has a strong eye and a clearly good collaborative relationship with Bayona. The cast is rounded off by Sigourney Weaver and Toby Kebbell.

See the trailer below (via USA Today), along with a poster.

A visually spectacular drama from acclaimed director Juan Antonio Bayona (“The Impossible”), based on the award-winning children’s fantasy novel. 12-year-old Conor (Lewis MacDougall) attempts to deal with his mother’s (Felicity Jones) illness and the bullying of his classmates by escaping into a fantastical world of monsters and fairy tales that explore courage, loss, and faith.