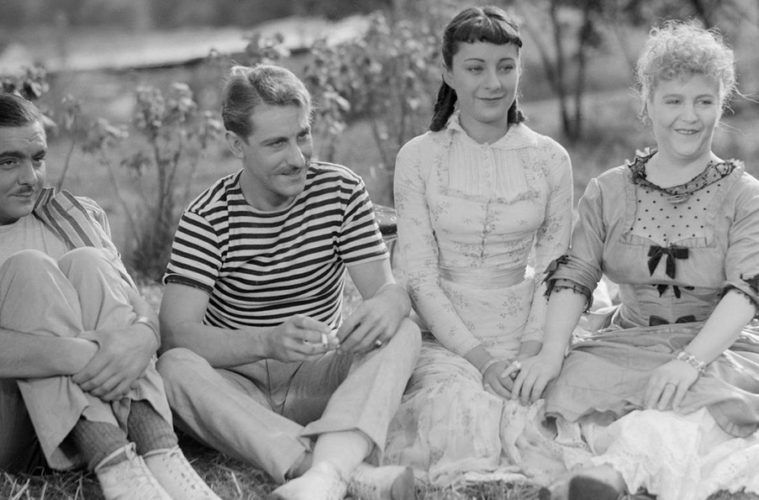 ‘A Day in the Country’ Hits Criterion: Jean Renoir’s Universe of Emotions

Film culture loves a mythic production. Georges Méliès discovered editing when his camera accidentally broke. Orson Welles adapted The Lady From Shanghai because a coat check girl happened to be reading the book. Robert Rodriguez made El Mariachi for $7,000. Cinema’s origins are even based on a myth: dozens running out of a theater in fear that a train would hit them. Even when we know them to be patently false, we often indulge their status nonetheless—they feed into our conception that cinema is somehow more powerful than the materials of reality. The fear is that deconstructing the myth would constitute a deconstruction of the work — to lose pleasure in the gesture, the composition, the emotion.

A Day in the Country, Jean Renoir‘s 1936 impressionist image of past frivolities drowning in time, is drenched in the myths of its production: a sudden rainstorm halted the production and had to be integrated in the story; Renoir could never return to it because of a “creative block”; the mid-sized length was conceived by its producer while having a creative breakthrough as he hid from the Nazis. And thus the film that developed, which is now out on Criterion Blu-ray, is its own miracle.

None of these are totally true, however. There was a giant rainstorm that delayed filming, but the story had already called for one. Renoir did not return to the set, but mostly out of other projects that had tight scheduling (his assistant, the formidable Jacques Becker, completed shooting based on a very specific blueprint). And the mid-length design of the film was always planned, though certain scenes set in Paris were scrapped. (Much of the film’s production is eloquently demystified by Christopher Faulkner on a video interview included with the disk.)

But even knowing the film is not too much of an accident, there’s still a sense of mystical grandeur in viewing A Day in the Country, that it perhaps contains the entire universe of emotions. At 41 minutes, its slightness of weight rams into focus as the film is suddenly impacted by the medium’s greatest asset, time, revealing all of life’s tragedies. “Some of the happiest moments were here,” we are told, which is to say they are gone and now the past, while the shaking, trembling present awakens.

If some of this feels like weightless posturing (a tendency of most film criticism), let it be said that Renoir and A Day in the Country can be difficult to write about. The what of a Renoir shot is often obvious, composed to directly capture the actions of his characters; thus, the why becomes very difficult. Take, for example, the film’s first outburst of pure bliss. The two fisherman — Henri and Rodolphe — have been lamenting their girl troubles while sharing a bite to eat at a small cafe. They open the window, and like a cinematic dream suddenly appearing, the image of a beautiful, virginal woman, Henriette, lays before them, swinging in nature. But the next shot — the one so many people remember, and so often seen on posters — is, in fact, not the lyrical vision of the girl swinging in close-up. That obvious connection of pleasure (his viewing of her experiencing) is avoided, for Renoir cuts to a rather objective view of the family at an angle that adjusts away from the point-of-view of fishermen, returning us to reality before entering a new subjective. This creates a more harmonious view of both reality and poetics existing within a same dominion, not tethered to a specific subjectivity.

To say Renoir captures action is to say his cinema is one of gestures, movement, emotions, smiles, tears, and kisses. While typically known for a use of deep focus, his formal patterns are more elusive than such a description could suggest. He rarely repeats shots and refuses to establish space, but in lieu of these filmic patterns he captures something akin to contemporary realism. This occurs both in the film’s visual sense of the world around them — trees move their limbs, the air can feel a bit hazy — and the fact that Renoir’s characters are hardly saints. Perhaps it’s not a shock that the two fishermen first announce themselves as archetypes (the hopeless romantic and the philanderer) only to switch sides by the end, but what is sometimes shocking is the casualness this all represents. There’s no tension to this sexual courtship, and Renoir’s camera does little to accentuate their attempts to get these two women, the relaxing mood among the paradise part of the film’s elusive nature.

Some of this goes to the feeling of innocence that A Day in the Country exudes for so much of its running time, much of which is due to a period setting that recalls the paintings of Renoir’s father, Auguste. The women arrive in white, the day couldn’t be more peaceful, and the ignorance of Henriette’s father strays the film away from suspense. This is not to suggest that these moments are irrelevant, but, like Richard Linklater’s Dazed and Confused, they attempt to show how one lives in blissful happiness as opposed to create undramatic stakes. (Manny Farber summarized the film in one sentence: “As usual, Renoir maneuvers his motorless plot into splendid landscape to press home the idea that man is a handsome spot in nature.”) Henri and Henriette’s more dramatic romance are juxtaposed against the almost strangely innocent courtship of Rodolphe and her mother, the former imitating a faun out of some Shakespearean comedy. But that materially strange casualness only contrasts with the moments of inexhaustible feeling, and the first meeting of eyes between Henri and Henriette is sexual desire at its most ingenuously romantic.

And then comes the encounter. A few playful grabs rejected, but then, suddenly, a kiss. Is it romance? Is it rape? Is it the thrill of passion? A fear of it? The first time I viewed A Day in the Country, I felt angered by this scene’s inscrutability, that Renoir would contain so many contradictory emotions. Revisiting it, however, Sylvia Bataille’s reaction seems to contain the universe of emotions — as André Bazin described, “In the space of a few frames she expresses all the disenchantment, the pathetic sadness, that follows the act of love.” It is as if her entire past — and then her future — becomes clear.

Her single tear becomes a rain, and the rain a downpour, time passing and life’s innocence gone. It seems almost appropriate that this 19th-century paradise would dissolve years later, just as a film made in 1936 could not be finished until a war had changed everything. The final glances of these two, her aching mouth hoping to return to such innocent times, speaks everything without saying anything. And thus down the river once more, no stopping time itself.

Kubrick and Clarke’s motto for 2001 was that if someone understood it, they had failed as artists. If I truly ever feel I understand the multitude of eye glances between Henriette and Henri at the end of this film, I feel I have failed as a viewer. A Day in the Country is only an unfinished film in the sense that it can’t leave us with the satisfaction that there is always more to say. That is not to reduce what has been created here as simply a reflection of life itself — such categorizations always feel less substantial than the purveyors of such clichés believe — but that it only crafts necessary drama in pockets of what never felt staged, but like the basis of reality. Satyajit Ray transposed it to India, Jacques Rivette pushed it through both documentary and fantasy simultaneously, and many others attempted to find the humanity at the center of his films. Not a humanism of “goodness,” but of understanding that goodness is hard to come by, and even harder to maintain. Perhaps that’s what’s contained in those final moments of A Day in the Country: it was once good, but that’s all there is, was, and ever shall be.

A Day in the Country is now available on Criterion Blu-ray and Hulu Plus.