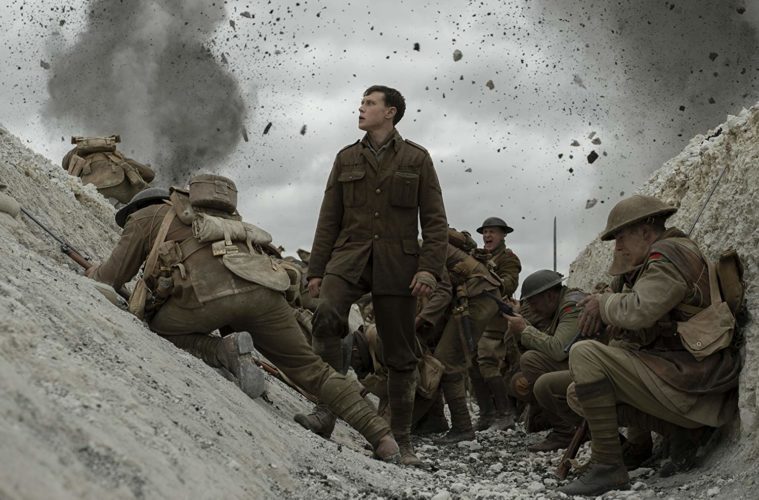 War is a cataclysm that scars everything in its proximity. From the bodies and psyches of the people who must fight in it, to the towns and cities that happen to be in its wake, down to the very land itself, the churn of battle destroys everything without remorse, consideration, or mercy. No movie interested in exploring the realities of war avoids these facts, but it is possible that no film in recent memory evidences this truth better than 1917.

Set in April of the titular year, Sam Mendes’ World War I epic follows two young enlisted men who are given a seemingly impossible task by their commanding officer. The Great War is still raging, and a battalion of soldiers is preparing for an offensive push under the false assumption that the Germans are retreating. There is no way to inform the unit of their tactical mistake except to send a message on foot. Blake (Dean-Charles Chapman) is good with maps and has a brother who is a lieutenant in the wayward company, so he is a natural choice for the mission, and he chooses Schofield (George MacKay) as his partner. They must travel miles over no-man’s-land and territory still crawling with enemy soldiers, exposed and alone, in order to reach their objective. The visual coup of 1917 is that their entire journey is filmed as though it were a single, unbroken take.

The opening scene, in which the men are rousted from their light repose in a bucolic field so that they can walk into the trenches to receive their orders, serves as a brilliant introduction not just to the visual conceit of the film, but also the effectiveness of that conceit in communicating the true scope and terror of war. What begins as a shot of two soldiers gazing out over an open meadow turns into an impromptu tour of the path to hell as they men walk, first showing more lounging soldiers, then the camp where food and laundry are being prepared, down a ramp into the trenches where soldiers wait for the call to go over the wire, caked in mud and dirt, leaning against sandbag walls, curled into cutouts in the embankments. The walk is a paradox, covering a small amount of space while also encompassing a wide swath of experiences and situations. The unnaturalness and artificiality of the construct of war could not be more apparent than in this moment, where the boundary between peace and battle is shown to be so thin but so drastic.

The visual juxtapositions and geographical tactility of the battlegrounds and the areas of seeming peace are only part of the reason that the decision to shoot the film as though it were a single shot pays off so well beyond just being an interesting hook or daring formal gambit. Mendes (who has his sole writing credit on this film) and his co-writer Krysty Wilson-Cairns weave this deceptively simple tale of two men on a mission with moments both big and small, all of which are well-served by being observed in real-time. Climbing through razor wire, crawling across mud-choked fields, clearing seemingly abandoned buildings; nothing is given short shrift, and everything is underlined by the unbroken gaze. World War I was a war of meters won over days and weeks, and 1917 becomes a microcosm of this idea, showing the struggle for every step these men take.

Both Chapman and MacKay bring an incredible amount of pathos to their deceptively simple roles. Rather than remaining ciphers of everyman soldiers, each of them imbues their character with shade and texture enough to make them feel real, while not dipping into standard cliches of battlefield confessions during downtime–mainly because there is no downtime for these men. They likewise skirt the banal dichotomy of grizzled veteran and wide-eyed novice, each bringing their own level of commitment and bravery to given situations in line with their respective strengths. It’s a testament to both the actors’ skill and Mendes and Wilson-Cairns’s care with their construction.

Meanwhile, Roger Deakins brings his paradoxically standard excellence to the photography to bear on the whole odyssey, finding the color and temperature of each landscape and situation and pushing them to their dreamy or nightmarish heights. A scene at night in a bombed-out village lit by firelight and arcing aerial flares is a study in shadow and light composition, an awe-inspiring vignette that promises to be one of the most otherworldly and memorable sights in any movie this year, eclipsing any alien world or parallel dimension for sheer visual splendor. Production designer Dennis Gassner deserved extra praise for his work as well, dressing each environment for maximum impact, between the rat-eaten dead of no-man’s-land and the graffiti in the trenches.

Layered atop all of this is Thomas Newman’s score, a soundscape of tension and wonder that moves from the atmospheric and ethereal to the melodic and balletic. It adds to the sensation of floating through a dream, a sort of experiential fantasy built upon the anxiety and wonder evoked by combat. It may be his best work yet.

Deciding to craft a film as though it were all done in a single take means that everything must balance perfectly lest the artificiality be underlined rather than smoothed over. It is a credit to every person who worked on this film, at every level of development and execution, that 1917 works as well as it does. This is a film that easily could have been a disaster, or merely an empty but beautiful technical exercise. Instead, it is a complete vision brought to stirring life, at turns thrilling and terrifying, entertaining and moving. Seek out the largest screen you can.