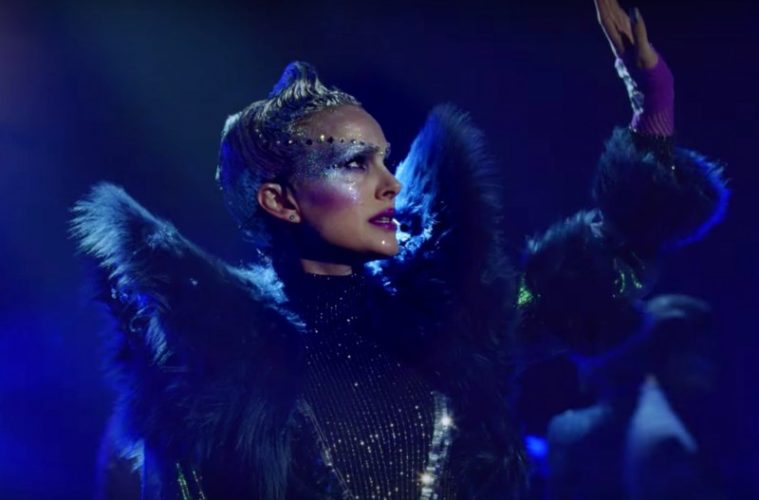 It’s the final month of 2018, which means a great deal of catching up on the best films of 2018 so far, along with a handful of films in theaters to check out. This month brings some last-minute hopeful awards contenders as well as a selection of festival favorites, a few promising blockbusters, and some oddities.

Considering the official embargo isn’t up yet, we can’t give our reviewer’s thoughts on Vice yet, but they are… less than kind. However, I still have some morbid curiosity when it comes to Adam McKay’s cartoonish-looking depiction of the Bush era. With a physically transformative performance from Christian Bale as Dick Cheney, we’ll have to wait and see if the final product will have been worth it, but at the very least, perhaps it’ll give way to a reappraisal of Oliver Stone’s overlooked W.

We aren’t getting a Step Brothers 2, so this reunion between Will Ferrell and John C. Reilly will have to suffice. Taking on the classic Arthur Conan Doyle characters, Tropic Thunder writer Etan Cohen follows up his disappointing directorial debut Get Hard with something that will hopefully be a bit more endearing–or just downright silly. Also starring Lauren Lapkus, Rob Brydon, Kelly Macdonald, Rebecca Hall, Ralph Fiennes, and Hugh Laurie, it aims to be enjoyable comedic counter-programming this month.

Presumably still shaken up by the soul-draining experience that was The Hobbit trilogy, Peter Jackson isn’t venturing back into narrative filmmaking any time soon, but he does have two new projects this month. While he produced the big-budget fantasy Mortal Engines, the more interesting-looking film is his new documentary They Shall Not Grow Old, which takes never-before-seen World War I footage and uses audio and video enhancement techniques to resemble what the experience of the soldiers might have been like. Getting rave reviews following its fall festival tour, it’ll be presented in the U.S. at two one-night-only special events.

Not to be confused with the aforementioned John C. Reilly-starring Holmes and Watson, his other duo-led December release, Stan & Ollie, depicts comedy legends Laurel and Hardy with some help from Steve Coogan. Following a strong response at its BFI London Film Festival premiere, the film is directed by Jon S. Baird (Filth, Green Street Hooligans) and written by Jeff Pope (Philomena). Rather than the by-the-numbers biopic that Reilly so beautifully parodied in Walk Hard, this one zeroes on in the duo’s farewell tour, delving more into the drama and emotion of their working relationship.

Following up her small-scale, impressive thriller The Invitation, Karyn Kusama has given Nicole Kidman quite a transformative showcase with Destroyer. Tracking Kidman as an LAPD detective whose past catches up with her after going undercover, Christopher Schobert said in his review, “Nicole Kidman is relentless in the fascinating, ambitiously pitch-black, often off-putting police drama Destroyer. Karyn Kusama’s follow-up to the slow-burn horror gem The Invitation is a humorless, grim experience, one bursting with graphic violence and sun-soaked sadness. (It’s like season two of True Detective condensed to two hours.) Yet there are moments of great beauty and real power. And, above all else, there is a badge-wielding, pistol-whipping Kidman, unleashed and on fire.”

One of the few directors who is able to still wrangle a decent-sized budget for Hollywood studio fare that doesn’t involve capes or anything of the ilk, Robert Zemeckis’ formally inventive films are still ones to marvel at. Following his remarkable return to live-action with the trio of Flight, The Walk, and Allied, his next project looks is a mix of that realm and a healthy dose of motion capture. Welcome to Marwen, another remake of a documentary from the director, is based on the 2010 film Marwencol, and after a wild first trailer, a second one shifted tones to an entirely inspirational one, perhaps fitting for its December holiday release date. The story follows Steve Carell’s character in the true story of a man who was beaten into a coma, leaving memory loss, he then constructs a fantastical World War II-era world of dolls that fight the Nazis, sharing parallel to his real world. – Jordan R.

Clint Eastwood is back… again. Following this February’s The 15:17 to Paris, the director’s second film of the year marks the first time he’s been in front of the camera since 2012’s Trouble with the Curve and the first time he’s directed himself since a decade ago in Gran Torino. Warner Bros. has been keen to insist this tale of geriatric drug smuggling is a strictly commercial effort, but we’ll find out if there’s more in the trunk in less than two weeks.

I’ll admit that the combination of superhero fatigue and an animation style that seemed exhausting for a feature-length film meant Spider-Man: Into The Spider-Verse wasn’t on my must-see list this month. However, it seems like Sony knew what they had in their hands as they set early press screenings to a rapturous response weeks before the film’s theatrical release. Now, heading into the blockbuster month, it looks like this Phil Lord- and Chris Miller-produced animation is one of the few tentpoles worth seeking out.

As expected when it comes to a serial killer movie from Lars von Trier, The House That Jack Built divided Cannes audiences, though we were firmly on the positive side. “Whether there’s any worth to be found in The House That Jack Built will depend on the viewer’s interest in delving deep into von Trier’s tortured psyche,” said Giovanni Marchini Camia in his review. “It’s unlikely anyone will empathize with him and it’s certain many will find the film execrable, but those willing to indulge his excess are offered a wealth of fascinating material. As far as artistic self-portraits and disquisitions on the creative process go, this one’s nothing if not unorthodox.” Now, after one-night-only screenings last month, the film will get a proper release this month.

Following his harrowing directorial debut The Childhood of a Leader, Brady Corbet is stepping up his scope with Vox Lux. Telling the story of Natalie Portman’s character on her pop stardom journey, from 1999 to 2017, Rory O’Connor said in his review, “It’s pleasing to note that the actor-turned-director seems to have forgone none of Childhood‘s aesthetic swagger and misanthropic bite in the process of making his second feature. He has, however, significantly fine-tuned his nose for satire in that time and what we have as a result is not only a thrilling examination of fame and violence in the 21st century and how the two are intrinsically linked, it might also be 2018’s most blistering cinematic provocation this side of Lars von Trier’s The House That Jack Built.”

“What a deft, lean storyteller this Paweł Pawlikowski has become. The five-year gap between his latest film, teasingly titled Cold War and given a berth in competition at Cannes, and Ida (which premiered in Toronto in 2013 and spent almost two years on the festival circuit) must have felt like an age,” Rory O’Connor said in his review. “Indeed, if there’s one thing we’re never asked to endure in the Polish-born filmmaker’s work, it’s that very nuisance: time. The days and years never drag in his world; instead they seem to skip like a needle across the grooves of a battered record. Cold War depicts a sweeping romance (apparently loosely based on his parents’ relationship, a battered record indeed) that takes us through four countries and almost a decade-and-a-half. It’s 84 minutes long.”

Jordan Peele’s Get Out was brilliant in its satirical take on race relations in today’s America, but another Sundance feature proved to be even more harrowing in its realistic depiction of how subtle racism can play out. Sebastián Silva’s latest film Tyrel follows Jason Mitchell’s character Tyler placed in a testosterone-heavy, white man-filled weekend and the anxiety-inducing isolation he’s faced with.  I said in my review, “Like a lucid nightmare where no one can feel your alienation no matter how loud you scream out, these small moments boil to a suffocating climax that never explodes, making TYREL a startling cogent drama about race relations in today’s America. For Tyler, even next to one of his best friends, there’s no promise he’ll ever feel fully comfortable. I can think of no more petrifying, damning conclusion.”

After the footage was locked away for nearly fifty years due to legal battles, the recent death of Aretha Franklin has allowed her family to now approve the release of Amazing Grace, a music documentary capturing her performance at the New Temple Missionary Baptist Church in Los Angeles in January 1972. While the audio of the event became the artist’s best-selling album, we now get to see how Sydney Pollack (who is uncredited) captured the performances. Set for a one-week-only run at NYC’s Film Forum, the film will expand next year.

December is usually synonymous with family fare that’s palatable for all ages, but every so often we get some daring releases and that’s certainly the case when it comes to Wang Bing’s eight-hour epic Dead Souls. Set to get a run at NYC’s Anthology Film Archives and hopefully expand a bit beyond there, Ethan Vestby said in his review from last year’s TIFF, “For simply depicting family onscreen, think of how many recent films–especially those that populate the festival circuit, namely those of Hirokazu Kore-eda–draw comparisons to Yasujiro Ozu. Yet, the feeling of watching that Japanese master’s dedication to the elderly is stronger here, be it the many shots that conveyed simply a sense of immobility.”

While the films that won Best Picture for a director can be compelling, it’s often just as fascinating to see how they use their new clout to take on something perhaps more daring next. This is the case for Barry Jenkins, who gorgeously adapts the intricately-woven, fiery writings of James Baldwin with If Beale Street Could Talk. Christopher Schobert said in his review, “Barry Jenkins has created a film both tender and tough, with a time, a place, and a story to lose oneself in. Sublime in its depiction of an emotional connection and subtle in its layers of systematic oppression, Beale Street is a major work from a filmmaker whose gifts are clearly boundless.”