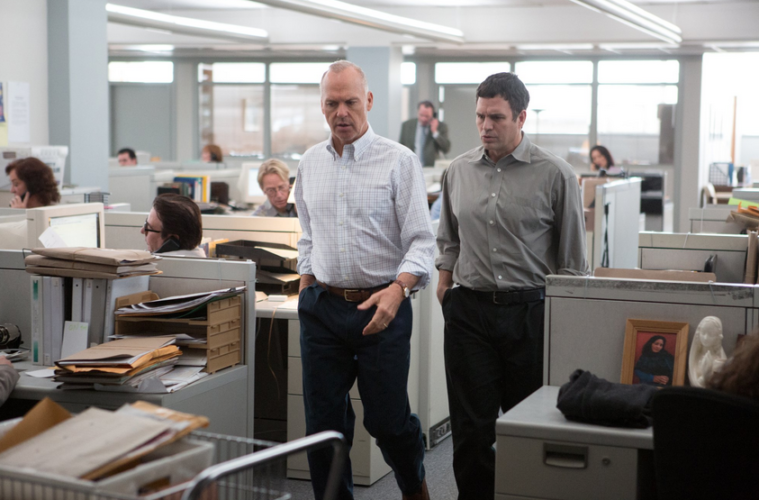 10 Films to Watch Before Seeing ‘Spotlight’

There are few people in show business with such enviable careers as Thomas McCarthy. As an actor, he’s worked with everyone from Peter Jackson and Clint Eastwood to Lukas Moodysson and Mike White, in addition to his pivotal turn on HBO’s The Wire. As a writer-director, McCarthy’s output, starting with his debut feature The Station Agent, rarely fails to captivate audiences. Even McCarthy’s critical missteps, such as his comedic fairy tale The Cobbler, are equally compelling for their flaws and miscalculations.

His newest film, Spotlight, has already garnered an immensely positive critical reception, including our review from Venice. The drama is based on the true story of the journalists at the Boston Globe who discovered a child molestation scandal and cover-up within the walls of the Catholic Church.

If you’re interested in thematically-similar films, focusing on journalism, courtroom drama, and David and Goliath battles of moral sacrifice, you’ve come to the right place. The following ten titles represent some of the finest cinematic examples of the uncertain struggle to do the right thing. Enjoy the list, and please suggest your own recommended titles in the comments.

The two biggest obstacles ever faced by journalists may be the church, as seen in Spotlight, and the state, as seen in Alan J. Pakula‘s classic All The President’s Men. The struggles of Bob Woodward (Robert Redford) and Carl Bernstein (Dustin Hoffman) are the stuff of dreams for any young journo hoping to change the world with their words. Everyone knows the story of how the two hungry reporters uncovered a conspiracy involving the burglary at the Watergate Hotel, which led to the resignation of President Richard Nixon. If you haven’t seen All The President’s Men, you do not know the enrapturing effect of Pakula’s compositions and Gordon Willis‘ unparalleled cinematography. The film is an ode to the power of investigative journalism and rousing reminder that ink can have an incredible effect on history.

While hearing a confession, a Catholic priest (Brendan Gleeson) is told he will be murdered in one week — the following Sunday to be exact. Confused, the priest falls silent. The confessor explains he was badly abused as a child by another priest, who has since passed away. The confessor has been robbed of his opportunity to exact revenge on the priest who abused him. Instead, he’s decided he will murder a good priest. The priest is given one week to put his affairs in order, leaving him adrift in a picturesque seaside Irish town filled with endearingly innocent sinners. Writer/Director John Michael McDonagh‘s sophomore effort is a charming mixture of the sadly sweet and the crudely raunchy, each tone complimenting the other rather nicely. Calvary is a moving treatise to the power and moral responsibilities of the archetypal priest.

The authoritative power the Catholic church wields over their flock is unrivaled in this world and possibly the next. The command with which God’s earthly representatives are empowered grants them unquestioned trust of Catholic churchgoers all over the world. Amy J. Berg‘s scathing documentary Deliver Us From Evil demonstrates this fact with chilling and heartbreaking starkness. The film focuses on Father Oliver O’Grady, an Irish Catholic priest who admitted to molesting an untold number of children in the late ’70s and early ’80s. It is devastating to learn that while the events of Spotlight were happening in Massachusetts, Father O’Grady’s crimes were taking place on the other side of the country in California. Deliver Us From Evil is a searing and urgently important work.

Ben Affleck‘s somber directorial debut examines in gritty detail the lives of lost souls on the streets of Boston, betrayed by those sworn to protect them. Our protagonists are an unmarried couple (Casey Affleck and Michelle Monaghan) working as missing person investigators. As in McCarthy’s Spotlight, they encounter corruption and other nasty struggles on the road to doing the right thing. Endowed with a similarly stellar ensemble cast to Spotlight, including Amy Ryan, Morgan Freeman, Ed Harris and John Ashton (Marvin Dorfler from Midnight Run, anyone?), Gone Baby Gone is a thoughtful and emotional elegy to the lost innocence of youth.

The road to the truth is never easy to navigate. In 1995, former tobacco scientist Jeffrey Wigand (Russell Crowe) found himself a victim of intimidation and death threats after he attempted to expose secrets about the addictive and dangerous nature of cigarettes. Michael Mann‘s icy cool film is built on Eric Roth‘s captivating and enraging screenplay, and the performances of his ensemble cast, including Al Pacino, Michael Gambon and Christopher Plummer as 60 Minutes‘ Mike Wallace. Tensely gripping, the film is a fierce indictment of corporate greed and apathy. It’s a wounded plea for those afraid to speak out because they see themselves as the little guy, helpless against the deep pockets of big corporations.

Page One: Inside the New York Times (Andrew Rossi)

An enthralling docu-look behind the pages of The New York Times, beginning just as the reign of the print medium seems to be coming to an end. Delving into the newspaper’s rich and influential history, the film is a tender love letter to old school journalism: good journalism, hard journalism — the kind of journalism that cannot be done with a simple Google search. Look no further than the amusingly tense interaction between former Media Equation columnist, the late David Carr, and Vice News co-founder Shane Smith, in which Carr responds to Smith’s admission that he’s not a journalist, with one irritated word: “Obviously.”

While reporters are often the first to harshly scrutinize their subject’s moral character, the journalist’s ethics are equally important. Take the example of Stephen Glass (Hayden Christensen), once a well-respected reporter for The New Republic, famously known as the official in-flight magazine of Air Force One. In 1998, Glass was fired after it was exposed he had fabricated a number of his articles. In perhaps the best performance of Christensen’s career, the snake-like Glass smiles and lies his way through a maze of glaring doubt. His inevitable downfall is a fascinating tumble to witness. Like a spoiled child, the youthful brashness of Stephen Glass may explain his mistakes, but it does not condone them.

A young, upstart congressman (Ben Affleck) finds himself embroiled in a sex scandal and looks to his old friend, a seasoned reporter (Russell Crowe), to help save his neck. A high tension pot-boiler told from the point of view of a struggling team of investigative journalists, where the thrills are hinged on getting out there and beating the pavement. Even if that pavement is splattered with the blood of the recent dead. The film, co-scripted by Tony Gilroy (Michael Clayton) is a rather lively adaptation of an award-winning BBC miniseries of the same title, which featured an early performance from a young James McAvoy. Themes of loyalty and betrayal are at the heart of State of Play, a stern reminder that sometimes it’s the job of the press to keep the rest of us accountable.

The legal system can be unfriendly to the common man, especially to those without the sanctuary of wealth and privilege. In The Verdict, the Catholic Church is an ever-present symbol in the background. The monolithic Boston hospital, owned by the church, stands accused of criminal neglect resulting in a young mother being reduced to a permanent vegetative state. When we meet Paul Newman‘s Frank Galvin, he’s an ambulance-chasing lawyer undergoing an uncharacteristic moral crisis of conscience. Galvin’s attempt to finally do the right thing could potentially end his career. As with the protagonists of Spotlight, the stakes couldn’t be higher. Perfectly scripted by a young David Mamet, and masterfully directed by Sidney Lumet, The Verdict could be the most emotionally engaging courtroom drama ever produced.

The machine of the United States government is comprised of gears and cogs, which can easily ensnare and grind up a lone, solitary individual. Undocumented immigrants are often the first casualty of this broken system, unfairly living under the constant fear of deportation. Thomas McCarthy’s The Visitor is his most thoughtful film to date, and the most thematically connected to Spotlight. An aging Connecticut college professor (Richard Jenkins, who garnered an Oscar nomination for the role) finds a young immigrant couple living in his New York apartment, and reluctantly invites them to stay. As they develop a quietly familial bond, that very machine roars to life, threatening to rip them apart. Executed with reserved elegance and heartfelt humor, McCarthy proves that even the saddest stories can be utterly life-affirming.

Spotlight opens in limited release on November 6th and will expand throughout the fall.