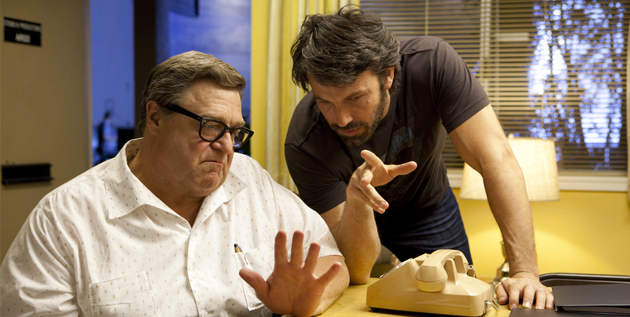 10 Films To See In October As we move closer to the end of the year, this month brings a eclectic slate of festival favorites finally arriving in theaters — some first premiering last year, while others were shown just as recent as last week. Aside from the new releases below, don’t forget that David Lean‘s classic Lawrence of Arabia will be back in theaters on October 4th, while 1971’s lost Aussie noir Wake In Fright arrives in limited re-release a day later. With New York Film Festival kicking off as well, we delivered our take on the opening night film, Ang Lee‘s Life of Pi, so make sure to follow our continued coverage. Check out this month’s rundown below.

Synopsis: Young Victor conducts a science experiment to bring his beloved dog Sparky back to life, only to face unintended, sometimes monstrous, consequences.

Why You Should See It: After years of going through the motions with various Johnny Depp collaborations, Tim Burton is finally looking to deliver something worthwhile as he returns to his own well. Adapting his original short film, Frankenweenie takes the bold black & white, stop-motion route in this monster movie twist. We were a bit mixed coming out of Fantastic Fest, but I look forward to seeing if Burton still has some passion left with this project.

Synopsis: Found footage helps a true-crime novelist realize how and why a family was murdered in his new home, though his discoveries put his entire family in the path of a supernatural entity.

Why You Should See It: While horror films are a dime a dozen, ones that actually terrify are few and far between. This month, as Paranormal Activity 4 likely tops the box office in this respective genre, there’s another fright fest that seems to crawl even deeper under your skin. We dug Scott Derrickson‘s latest film, starring Ethan Hawke, way back in March (full review) and now it’s unraveling just in time for Halloween.

Synopsis: A married couple whose bond is built on a mutual love of alcohol gets their relationship put to the test when the wife decides to get sober.

Why You Should See It: While she got some geek cred in Scott Pilgrim vs. The World, Mary Elizabeth Winstead has not only delivered her best performance yet in a blossoming career, but also my favorite from Sundance (full review). James Ponsoldt‘s drama has a few structural issues, but Winstead is a sight to behold as we see how alcoholism affects those around her, including Aaron Paul, Octavia Spencer, Nick Offerman and Megan Mullally.

Synopsis: A local guide takes a young couple through a twisted backpacking trip across the Georgian wilderness.

Why You Should See It: Premiering on the festival circuit last year, I have no idea what to expect from this indie, which follows a trio of backpackers in Georgia (one being the always excellent Gael Garcia Bernal). Said to have stunning cinematography and atmosphere that seeps into your very skin, this is one trip I look forward to for the sheer mystery.

Synopsis: A man in an iron lung who wishes to lose his virginity contacts a professional sex surrogate with the help of his therapist and priest.

Why You Should See It: After a few dark turns, John Hawkes returned to Sundance with a stirring, sympathetic lead role in The Sessions. The drama captures the sexual awakening breakthrough of the polio-stricken Mark O’Brien (Hawkes), in which writer/director Ben Lewin could have easily stepped into over-sentimental territory. Despite its TV-movie aesthetic, he ends up excelling in crafting a rich, moving story with fully fleshed-out characters, while striking an immaculate balance of comedy and drama. Check out my review from Sundance.

Synopsis: A poor boy of unknown origins is rescued from poverty and taken in by the Earnshaw family where he develops an intense relationship with his young foster sister, Cathy.

Why You Should See It: After Cary Fukunaga‘s Jane Eyre last year, Andrea Arnold’s take on Wuthering Heights has set another benchmark for adapting classic literature. The Fish Tank director paints this world with a deft touch, crafting tightly focused close-ups to convey emotion rather than words. Establishing shots only open wide a handful of times, instead opting for a beetle crawling through the grass or a spiderweb oscillating in the cold wind. These little touches build the world more than any sort of exposition could dream to do. Check out my  TIFF review from last year.

Synopsis: 24 hours in the life of a being moving from life to life: by turns murderer, beggar, company chairman, monstrous creature, worker, family man…

Why You Should See It: One of our favorite films at Cannes is getting a limited bow this month. We described Leos Carax‘s latest as delightfully surreal, with the filmmaker channeling the absurd sensibilities of Luis Buñuel in his prime. The film has so many “holy crap!” moments that it becomes a breathtaking spectacle to witness. Featuring a series of outlandish vignettes strung together by an enigmatic chameleon-like lead character, Holy Motors is one of the most eccentric films of the year.

Why You Should See It: While not as focused or consistent as his debut In Bruges, dark comedy mastermind Martin McDonagh is playing in a whole new ballpark for Seven Psychopaths. In a way I can only explain as Adaptation meets a Quentin Tarantino feature, Colin Farrell, Sam Rockwell, Woody Harrelson, Christopher Walken, Tom Waits and more come together for a dog kidnapping plot turned violent — and hilarious. Check out our TIFF review.

Synopsis: As the Iranian revolution reaches a boiling point, a CIA ‘exfiltration’ specialist concocts a risky plan to free six Americans who have found shelter at the home of the Canadian ambassador.

Why You Should See It: After crafting two confident features with both Gone Baby Gone and The Town, the reinvigorated actor-turned-director Ben Affleck has now gone back in time for his third outing, with this 1979-set hostage drama. Blending more comedy than ever before, we highly recommended this one coming out of Toronto and one can read our full review here.

Synopsis: An exploration of how the actions of individual lives impact one another in the past, present and future, as one soul is shaped from a killer into a hero, and an act of kindness ripples across centuries to inspire a revolution.

Why You Should See It: Easily shaping up to be the most ambitious film of the year, the Wachowskis have teamed with Tom Tykwer to deliver an adaptation of the multi-century spanning Cloud Atlas. As the filmmakers attempt to return to the “spectacle” of 1960s and 70s “touchstone movies,” it sounds like they have wildly succeeded. Following our glowing review out of Toronto, this my most-anticipated film by quite a wide margin this month.