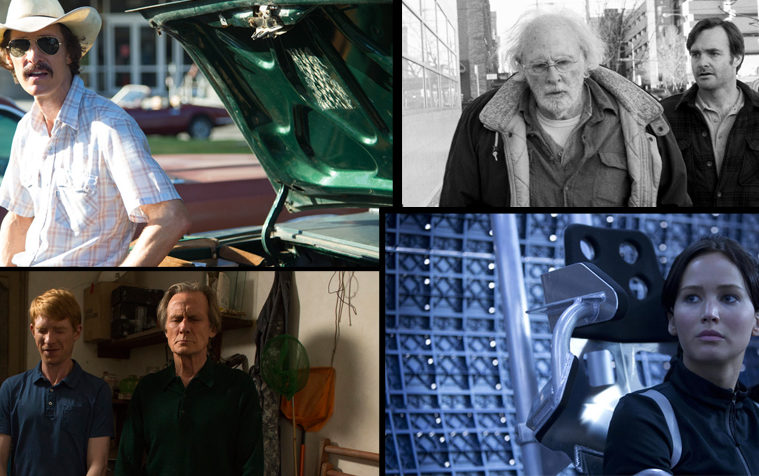 10 Films to See In November With just a couple of months left to go in the year, we’ve lost some promising films to 2014 (notably Foxcatcher and The Monuments Men), but there’s still a great deal to look forward to. When it comes to November, while our sure-fire pick for the top spot was recently moved to a Christmas Day release, we still have a batch of notable options, including the latest Disney animation, a few festival hits, a long-delayed sci-fi project that’s easily one of the most ambitious films of the year and a four-hour documentary. One can check out our rundown below and note that we’re holding back Hayao Miyazaki‘s final feature The Wind Rises, which gets a tiny Oscar-qualifying run this month, until it officially debuts next February.

Synopsis: Faced with an enemy that even Odin and Asgard cannot withstand, Thor must embark on his most perilous and personal journey yet, one that will reunite him with Jane Foster and force him to sacrifice everything to save us all.

Why You Should See It: It’s difficult to muster up much enthusiasm for the latest Marvel entry, particularly when it comes from an unproven feature director such as Alan Taylor, but the studio at least has a decent foundation for their latest sequel. Back in 2011, Kenneth Branagh effectively sold the world of this character and now, for the first time after banding together for The Avengers, Chris Hemsworth will return as our hero. Early buzz suggests it gets off to a rocky start, but eventually segues into worthy entertainment and our recommendation primarily lies in the fact it likely you’ll want to see this on the big screen.

Synopsis: Katniss Everdeen and Peeta Mellark become targets of the Capitol after their victory in the 74th Hunger Games sparks a rebellion in the Districts of Panem.

Why You Should See It: Released in spring of last year, The Hunger Games proved to exceed all financial expectations, so, thankfully, Lionsgate is giving the crew a bigger budget this time around. Considering much of my qualms of the kick-off film surrounded by Gary Ross‘ misguided shaky cam aesthetic, here’s hoping Francis Lawrence can provide a better eye to this science-fiction world. Add in Philip Seymour Hoffman, and this one is shaping up to be one of the few worthwhile young adult adaptations.

Synopsis: Fearless optimist Anna teams up with Kristoff in an epic journey, encountering Everest-like conditions, and a hilarious snowman named Olaf in a race to find Anna’s sister Elsa, whose icy powers have trapped the kingdom in eternal winter.

Why You Should See It: While the slapsticky trailers thus far have yet to effectively sell Disney’s latest feature-length animation, early buzz suggests there’s more in store for this adventure. If Pixar’s Brave left one desiring a worthwhile female-centered journey, hopefully this project, coming from the team behind Wreck-It Ralph and Tarzan, makes for a satisfying entry into the studio’s impressive slate.

Synopsis: At the age of 21, Tim discovers he can travel in time and change what happens and has happened in his own life. His decision to make his world a better place by getting a girlfriend turns out not to be as easy as you might think.

Why You Should See It: It’s hard to believe it’s been a decade since Richard Curtis‘ ensemble rom-com Love Actually, a feature that may or may not be on shuffle in your holiday viewing. For his latest, and possibly final, directorial work he explores some of the same themes, but instead of passing them around to different relationships, he expands them across time in a single bond. While the time-travel mechanics can be nitpicked to death in About Time, Curtis nails the emotions, even if they are on the nose. Not just the rom-com with a twist the trailers are selling, the Domhnall Gleeson and Rachel McAdams-led film is an entertaining, life-affirming tale of long-lasting love.

Synopsis: A boy stands on a station platform as a train is about to leave. Should he go with his mother or stay with his father? An infinity of possibilities rise from this decision. As long as he doesn’t choose, anything is possible.

Why You Should See It: It’s still been a long time coming for U.S. audiences to see the sci-fi drama Mr. Nobody. Premiering at TIFF and Venice four years ago, the film has toured the world at this point, already released on Blu-ray and DVD in many territories, but now it will finally be coming to the states. Led by Jared Leto, the film follows him as Nemo Nobody, the last mortal in a world of immortals in 2092, but that just cracks the surface of this wildly ambitious, entertaining, emotional experience. Already out on VOD, it hits limited release this month.

Synopsis: A world-weary political journalist picks up the story of a woman’s search for her son, who was taken away from her decades ago after she became pregnant and was forced to live in a convent.

Why You Should See It: The marketing thus far has led me to believe Stephen Frears‘ Philomena is your typical late-year Oscar-bait with not much added value, but thankfully that doesn’t seem to be the case. As we said in our TIFF review, the drama starring Judi Dench and Steve Coogan is “a rarity – a work that is genuinely crowd-pleasing, but also smart, funny, touching, and often surprising. In short, it’s a film your mother will love, and unlike most Oscar-bait, so will you.”

Synopsis: Obsessed with vengeance, a man sets out to find out why he was kidnapped and locked up into solitary confinement for 20 years without reason.

Why You Should See It: Since the first murmurs of a remake to Park Chan-wook‘s Oldboy cropped up years ago, the groaning hasn’t subsided and even though we were certainly in that camp, one talent came along to change our minds: Spike Lee. Say what you will about the outspoken director, but he’s proven he can helm everything from the smallest of independent films to studio efforts, all without abandoning his own style. With the source material of this adaptation providing a worthy backbone, let’s hope he can justify an English-language take — we’ll certainly be rooting for him.

Synopsis: The story of Texas electrician Ron Woodroof and his battle with the medical establishment and pharmaceutical companies after being diagnosed as HIV-positive in 1986, and his search for alternative treatments that helped established a way in which fellow HIV-positive people could join for access to his supplies.

Why You Should See It: A long-developing passion project for Matthew McConaughey and the creative forces involved, the story of Ron Woodroof finally hits screens this weekend and provides an stellar performance showcase for the ensemble, particularly a supporting turn by Jared Leto. As we said in our review, “her own progression through the disease will tear your heart out and whether it’s seeing her purposefully don a suit or lay prone on the floor too weak to inject her protein, she’s the epitome of humble humanity still surviving after the world has given up.”

Synopsis: An aging, booze-addled father makes the trip from Montana to Nebraska with his estranged son in order to claim a million dollar Mega Sweepstakes Marketing prize.

Why You Should See It: Following his hit The Descendants, Alexander Payne has returned to smaller territory with this black-and-white drama, led by Bruce Dern and Will Forte. As our Cannes review says, it’s a “quaint, simple story that’s wise enough not to pander to its audience, instead treating characters with care and, by viewing through a detached lens, a sense of reality in portraying their lives. Oddly straightforward and punctuated by humorous moments throughout, there is a droll clarity to the film that elevates the overall experience into a heartfelt, sincere drama.”

Synopsis: Tracking University of California, Berkeley, Frederick Wiseman looks at the the institution as it deals with budget cuts, tuition increases and school life in general.

Why You Should See It: Sorry, Hunger Games fanatics, but when a new Frederick Wiseman work is arriving in theaters, it takes priority. We can’t imagine a four-hour documentary on the ins and outs of an educational institution will be at the top of most must-see lists, let alone be playing in a variety of local theaters, but if you have the chance to seek this out it will be well worth your time. Check back for our full review ahead of its theatrical release.

What films are you planning to see this month?