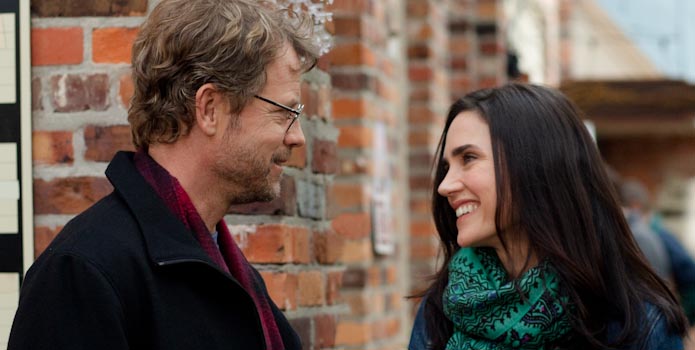 Every year a batch of earnest dramas with strong casts make their way to the festival circuit but end up exiting without much buzz to speak of. One of the strongest examples last year was the directorial debut of Josh Boone, Stuck In Love (formerly titled Writers), which bowed at Toronto International Film Festival. Bringing together Greg Kinnear, Jennifer Connelly, Lily Collins, Logan Lerman, Kristen Bell, Nat Wolff (Peace, Love, & Misunderstanding) and Liana Liberato (Trust, Trespass), the first trailer has now arrived today. From distributors Millenium Entertainment, this one is a safe bet for a VOD when it releases in the spring, perhaps the perfect fit for this project. One can check out the trailer below with a hat tip to The Playlist for bringing it to our attention.

Heaven help the children of writers — especially those children aspiring to be writers themselves. Take Sam Borgens (Lily Collins), just nineteen and already set to have her first novel published. Her father, acclaimed novelist Bill Borgens (Greg Kinnear), is ostensibly thrilled for Sam — but he can’t quite disguise his resentment that she never asked him for help. There might also be a touch of envy at his progeny’s progress, as Bill is helplessly stalled in the writing of his new book. But then, he has no one but himself to blame. He spends what should be his writing hours spying on his ex-wife Erica (Jennifer Connelly) and her new husband, refusing to let go of a marriage that truly, definitively ended; he even makes his son Rusty (Nat Wolff ) set a place at the table for Erica every Thanksgiving, despite the fact that she left him three years ago.

Welcome to Josh Boone’s Writers, where dysfunction makes good fodder for fiction and no one ever seems to get over anything. While Bill pines after Erica, Sam wants nothing to do with her mother, who is tentatively trying to assert herself back into her children’s lives. Determined not to suffer the same fate as her cuckolded father, Sam instead pursues a love life consisting exclusively of one-night stands. Rusty, meanwhile, is the polar opposite of his older sister: a hopeless romantic and a budding littérateur, he dedicates poems to his seemingly unreachable classmate Kate (Liana Liberato). When he finally does manage to win Kate over in a manner not exactly befitting a swooning, smitten bard (he punches her abusive boyfriend in the face), Rusty is unable to see that she is both less and more than the romantic ideal he’s constructed. But when Kate provokes a crisis, it soon proves to be the catalyst for the fractured Borgens family to reunite and begin to renew their bond, however imperfectly.

Wildly funny and deeply touching in equal measure, Writers is a promising debut for Boone, aided in no small part by the stellar cast he’s assembled. Veterans Kinnear and Connelly shine, but keep your eyes on the trio of Collins, Wolff and Liberatto: these expressive young talents nearly steal the show. Stuck In Love will see a release on April 19th.