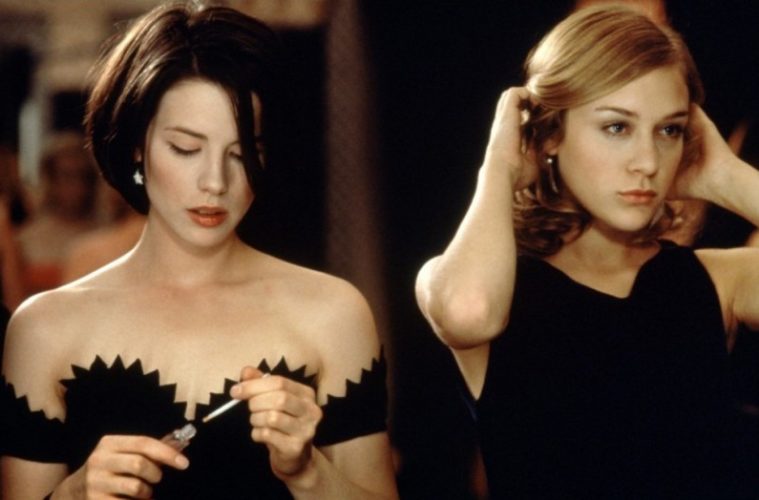 Among the memorable scenes from The Last Days of Disco is the easily discouraged Josh Neff’s (Matt Kesslar) dissection of Lady and the Tramp. Just as Disney released the pups from their vault this year, director Whit Stillman and select cast will celebrate the twentieth anniversary of Disco at select screenings this summer.

The third film in the director’s “Doomed-Bourgeois-in-Love series” follows what today we call “frenemies,” Alice Kinnon (Chloë Sevigny) and Charlotte Pingress (Kate Beckinsale), as they spend their days working their way up the ladder at a New York publishing house and their nights dancing and romancing at a Studio 54-style nightclub.

Cinephiles on both coasts and London (with more screenings to come) have that rare opportunity to see Disco with the filmmakers in person. The Film Society of Lincoln Center kicks off the summer tour with Stillman, Chloë Sevigny, Michael Weatherly, and Mackenzie Astin in attendance for a post-screening Q&A tonight, May 24. For more dates, follow Stillman’s active Twitter account.

We spoke with Stillman about Alice and Charlotte’s fraught relationship, today’s characterization of the disco era, and about his future projects, including a possible TV continuation of Stillman’s 2016 hit, Love & Friendship, starring Tom Bennett.

The Film Stage: I’ve seen the movie a few times, and I can’t figure out why Charlotte is so cruel to Alice.

Whit Stillman: We live in a society that’s considered to worship youth and implies it’s much better to be young than old. It’s a bit of false thing. Yeah, it’s good to be young and healthy, that’s true. Maybe good to have a lot of options and possibilities ahead of you. But also, you sort of don’t know your own mind that well. You get in situations, you get with people and you don’t really know that maybe this isn’t a situation you want to be in. You go along with situations that rational people would change. You go on a lot longer. Also there was a housing shortage. So Alice ends up friends with Charlotte, and she’s not really a friend of Charlotte’s. She even says “I’m not even sure I quite like you, we’re just roommates” to Charlotte. [Laughs.] I’m laughing again, I think it’s a funny thing. Somehow this kind of character, this Charlotte character, this egomaniac person who is too cool for school… first she’s the most sexy girl, the most out there girl, the most daring girl with all these situations. And then she’s also the most moralistic and most religious girl and singing “Amazing Grace” from the bed while criticizing Alice. Whatever it is, she’s going to outflank Alice and everyone else around her.

I just think that those people when you’re younger, unless they get elected president, you can avoid. You can say “I’m not going to be around these people who are totally putting me down all the time, and they’re always better than me, they’re bragging all the time.” Unfortunately, when you’re twenty-two or you’re sixteen, you put up with them for too long. Part of the film is Alice putting up with Charlotte for too long.

The disco era is characterized by the extravagant personalities, costumes and sexuality. But in Disco we only see it in passing. The main characters will walk by someone about to take drugs or a couple about to hook up. They’re always walking through it but stay unaffected.

You didn’t see the outlandish behavior. Fifteen years later we found out about all these amazing things that were supposedly going on. We didn’t see it at all. So we put in more stuff to satisfy people’s expectations. [Laughs.] It was there, I guess—someone saw it. There was just a lot of normal behavior. These nightclubs were really cool places and really fun. They made their money selling drinks generally, so it was mostly people buying overpriced drinks they would nurse for a long time so they didn’t have to buy another. One of the great things about this period is you didn’t have the bottle policy. Now at nightclubs, if you sit at a table they make you buy a bottle of champagne or vodka, and it just cost an absolute fortune.

If the disco nightclub era wasn’t as out there as it’s depicted today, what was really lost when it all ended? People still go to clubs and dance.

That’s true. The idea that it all ended is false. But record companies did suddenly stopped selling disco records, that’s true. The great clubs that were so important, they did disappear pretty quickly. To talk about Studio 54, it was a great place, it was sensational. They did great theatrical things. If you somehow managed to get in, you would get a high from the liquor plus the feeling of exclusivity. It was a marvelous atmosphere. Licentious behavior and drug taking doesn’t enhance that. When you read about that, it doesn’t seem like what life is all about. I think you’re right that we thought it had ended and disappeared more than it had. Dance clubs continued, dance music continued. There’s more continuity then we thought.

Music in the film is often as loud as the dialogue in scenes at the club and Rex’s. I’ve always wondered if that was poetic license or did it have to do with the mix?

I think that’s an error somewhere along the line. The dialogue correctly balanced is audible. That was also kind of a cheat. We had the music as high as we could have it while still having the dialogue audible. I did actually have a conflict with the mixer. I am a great believer in poetic license. I dipped the music for the dialogue. I liked to hear the music be substantial and I liked to bring it down for the dialogue so you can get in the words. The mixer I was working with had some religious thing. [Laughs.] He didn’t want to bring it down as much as I wanted to. He either wanted it lower to start with or higher for the dialogue and that was a point of conflict.

I think a lot of people working on films have specialized knowledge and hearing. He knew a lot more about music and acoustics than I did. I’m just a generalist, I don’t know much about music, I just know what I like. Sometimes I think we generalists who aren’t that knowledgeable are closer to the audience experience. And so if you had a problem that way, that’s either a mix in your TV set or the way it was produced was wrong. But I guess there was a problem. The intent of my poetic license was the opposite: I wanted you to hear the dialogue even though it’s set in a place where you normally couldn’t hear people without shouting. We tried the shouting thing on set but it was just ridiculous. We did the cheat of having them talk normally in a loud club.

Will you talk about the philosophy behind the Lady and the Tramp scene and how that ties into what Des (Chris Eigeman) says about “to thine own self be true“?

I think they’re similar kind of scenes, but I think they’re separate in their content and their implications. Lady and the Tramp is pretty specific to the sort of myth in literature, theater and film of opposites attracting.

So opposites attract I have a lot of problems with because it seems cool but actually, generally, it’s not a good idea. Generally, Tramp is going to revert to type at some point, as I’ve observed in human relations. It’s rare. Usually, change is a kind of come to Jesus thing. It’s a little bit like an alcoholic giving up alcohol or a licentious person becoming religious. They really have to transform themselves if they’re going to get away from being Tramp. It’s a big, big thing. It’s not just falling in love with Lady and getting along with her owners. And so I think that’s one message. And “to thine own self be true” is a different thing. You’re right that they’re very parallel as far as taking something we know about and applying it to the lives of the characters in the film.

Do you have any updates on The Cosmopolitans and Dancing Mood?

I’m working on both and I have another possibility, something written by someone else. It’s the first time I’ve been offered a good script, frankly. I’m waiting for things to settle at Amazon to finish The Cosmopolitans scripts and submit them. I’m recasting what I was thinking of doing for Dancing Mood. It might be called something else, but I really hope both of those things will happen. I also have the chance to, maybe, do a TV series based on the Love & Friendship novel I did. In that there’s a continuation character, Rufus Martin-Colonna, who is a really funny character. So there might be this funny, silly English aristocrat in the 1800s as a TV comedy. Essentially it’s the same character Tom Bennett played in the film. In the novel he’s the nephew of Sir James Martin played by Tom Bennett. But if it becomes a TV show, I would like Tom Bennett to play the nephew.

The Last Days of Disco 20th anniversary screenings will continue this summer. For more dates, follow Whit Stillman on Twitter.