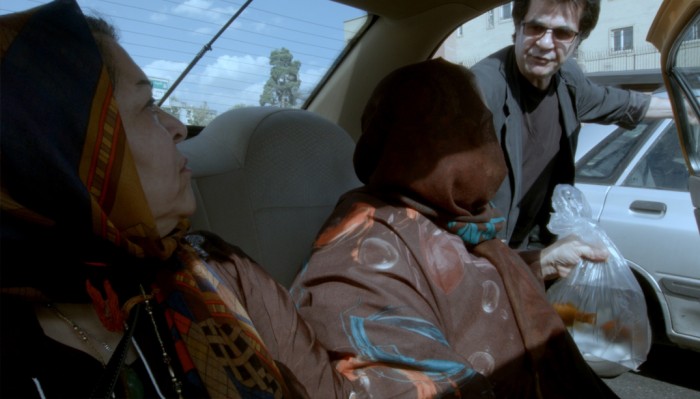 Though entirely a secret before being slotted into Berlinale’s lineup, the rave reviews for Jafar Panahi‘s Taxi have solidified it as one of my very most anticipated of 2015 — if we see it this year, at least. Until distribution comes through, curious parties will have to settle for two clips and a (subtitle-free) trailer that have made their way online, which display the Ten-like conceit behind his latest not-authorized-by-the-Iranian-government feature. [Keyframe]

Although the formal elegance and social significance many reviews (ours and others‘) applauded can only be glimpsed briefly herein, it’s nice to get some taste for how Panahi’s contending with restrictions this time around; after the dire emotional straits viewers were given a front-row view to in Closed Curtain, it’s nice to see Panahi at all. With any luck, the Golden Bear will bring more attention to his struggle and ensure that Taxi is seen by domestic audiences soon enough. As for distribution in Iran, Panahi has asked for the government to ease his censorship, saying, “I’m really happy for me and for Iranian cinema,” but “no prize is worth as much as my compatriots being able to see my films.”

Another Berlinale-related item of some significant interest is a trailer for the Silver Bear-winning Victoria, which has attracted attention for being staged in a single, 140-minute take. This first look at Sebastian Schipper‘s feature might be something of a disappointment, then, seeing as it cuts the action into multiple shots, many of them rather short in and of themselves — but I can’t complain about a respectable reveal of an exciting project, either. Good news: Adopt Films should have this one out within the next several months.

Watch all of it below:

What do you think of these two peeks? Are you anticipating any other titles that played at Berlinale?