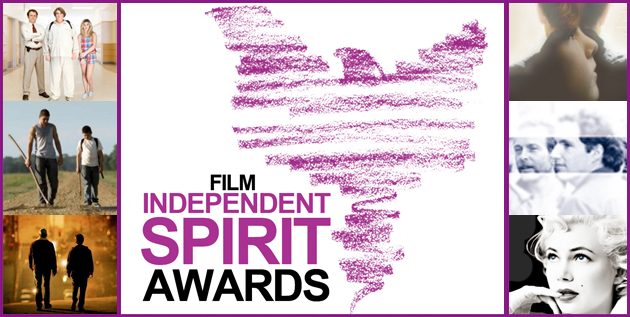 [Voting Spirit] Talking ‘My Week With Marilyn,’ ‘We Were Here,’ ‘Terri,’ ‘In the Family,’ ‘Hello Lonesome,’ ‘The Dynamiter’ and ‘A Better Life’ Last week I had the wonderful opportunity to be truly surprised by some of this films I saw, but this week was submerged in a bittersweet atmosphere as my quest to see all the Spirit Awards 2012 nominees drew to a close. Part of me is admittedly relieved, as many of these films have been pretty emotionally wrecking, and I must confess craving some more mindless movie fare. Yet I will miss sitting among such a wonderfully engaged audience on a nightly basis. This is a viewing experience not guaranteed in movie theaters and screening rooms, and I will miss the certainty that those with whom I share the darkness of the venue, share my hopes to witness something extraordinary unfold before us.

As the films discussed below are the last of the Spirit nominees, next week we’ll take a look back to discern who will win and who should win at the big show on February 25th. Be sure to check back and tell me who you think deserves a Spirit Award.

Me Week With Marilyn ~ Directed by Simon Curtis

Like Albert Nobbs, My Week With Marilyn is a movie that’s buzz has revolved solely around performance, in this case that of the stunningly talented Michelle Williams. It just seems there is nothing she can’t do, and the Spirits do love her. (She’s been nominated four times before.) She’s dazzling as the iconic Marilyn Monroe, but is the film’s only asset. In fact, it seems Williams is in a world all her own as every other performance (aside from the immaculate Judy Dench) seems set for a far broader movie. This is an entirely crass effort that tests the bounds of suspension of disbelief at every turn. To think that a green third AD would get such access and personal insight to so many big names who know the dangers of publicity on their private lives! It’s ridiculous, badly written, and poorly plotted. But Williams is wonderful, and may finally win her Spirit award.

We Were Here ~ Directed by David Weissman

Now is a time where the AIDS epidemic seems ages away, as the disease is barely a topic of discussion now that the stigma has relaxed and prevention and treatment has become more prevalent than panic. As such documentarian David Weissman’s melancholic film serves as a reminder and memorium for all those who passed when the disease first surfaced, and how horribly the world at large treated them. Men and women who survived this horrid time of rampant and cruel death give insightful interviews here, and while it’s heartbreaking to hear their tales of bigotry and grief, their courage and perseverance is deeply inspiring. Its title says it all: We Were Here.

The Dynamiter ~ Directed by Matthew Gordon

Like The Kid With the Bike, this coming-of-age drama from first-time filmmaker Matthew Gordon centers on a gruff and guarded boy who is played by a non-professional actor. However, rather than being supported by more cultivated actors as Kid’s Thomas Doret was, newcomer William Ruffin is surrounded by a cast of non-actors, and the results are muddled at best. Where Doret had the extraordinary Cécile De France to bring his underplayed portrayal to a higher and more empathetic level, Ruffin is left to bounce gritted-teeth dialogue off of performers whose delivery is often flat and awkward, resulting in scene work that is interesting, but rarely riveting. However, while The Dynamiter is rough around the edges, it does display Gordon’s raw talent for crafting gritty drama. Hopefully next time around he’ll be able to garner some more seasoned performers.

In The Family ~ Directed by Patrick Wang

This Tennessee-set drama centers on the heartbreakingly topical story of a custody battle that follows the death of one half of a gay couple. Once the child’s biological father is gone, his family takes the boy from the only other parent he’s ever known (writer-director Patrick Wang in an understated performance). It’s a compelling tale, but it is not cinematically told. The movie clocks in at 2 hours and 49 minutes, and the pace is woefully ponderous, dragged down by overlong dialogue-heavy scenes. I also marveled that much of the film is shot from the angle seen above, where the film’s hero has his back to us—even in scenes where he is alone! It’s a well-intentioned and ambitious film. I just wish it were more dynamically executed.

This intriguing dramedy splits its focus between three separate tales of relationships born out of desperate loneliness. In one an isolated voiceover artist sparks and unlikely friendship with his deliveryman. Another centers on a surprisingly sweet May-December romance that arises between an elderly but lively widow and her introverted next-door neighbor (pictured above). And the last follows a love story that blooms from an internet-based booty call. Unlike many films in this style, these stories—thankfully—never collide in some sort of contrived manner. They are instead linked thematically, which is intriguing even if not entirely successful.

Hello Lonesome’s writer-director Adam Reid is predominantly a commercial director, and he seems to struggle with this extended form of storytelling even in its short film format. Still overall the film is charismatic—save for the flat match.com couple—with some deeply moving scenework from actors who are often relegated to supporting parts. Real-life voice artist Harry Chase is hilarious in his revealing and dark portrait of a man trapped in an odd little world of his own divining. Lynn Cohen is mesmerizing as an old woman with a youthful crush that fills her with tremulous uncertainty. And James Urbaniak, who is often cast as a creeper, is downright charming as a divorcee open to an unconventional path to love. If you enjoy seeing underseen players getting their shot, then seek out Hello Lonesome and you won’t be disappointed.

This dark coming-of-age comedy has a strong start but ultimately falls into a fatally anticlimactic third act. The feature’s title character (played by newcomer Jacob Wysocki) is a high school misfit who is mercilessly mocked for being overweight and wearing pajamas to school. However when his well-intentioned but awkward principal (John C. Reilly) takes an interest in him, it seems he might make a friend after all. Their bond inspires Terri to reach out to another outcast, a pretty blonde girl (Olivia Crocicchia) who’s being slut-shamed for some in-class action. (It reminded me of Angus— does anyone remember that movie but me?) Ultimately, it’s a promising concept but Wysocki doesn’t have the screen presence to shoulder the feature once it goes off the rails plot-wise.

Prior to A Better Life, Mexico-born actor Demián Bichir was best-known for his role as drug trafficking kingpin Esteban Reyes on Weeds. Here he plays the opposite end of the stereotype spectrum, portraying a devoted father and illegal immigrant who works day in and day out to create a better life for his America-born and frustratingly entitled son (José Julián). However, Bichir’s performance is anything but expected. Solid but not showy he defines this surprising tale of immigrant experience, deftly managing the drama’s startling–but intriguing–turn into thriller territory. It’s no wonder that he’s a major contender in the race for the Spirit’s Best Male Lead, as well as an Oscar-nominee.

State of Mind: Once the eye strain headache subsides, I’ll be just dandy!

Check back next Tuesday, when Kristy will share her final thoughts on this year’s nominees race, and who will win and who should.