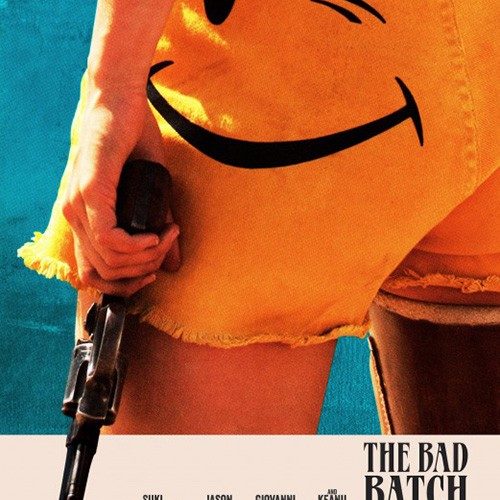 Ana Lily Amirpour’s second feature shoots for Harmony Korine meets Mad Max and would have nearly almost hit the mark were it not for the gratingly aloof attitude and the swaths of directorial license being taken. The Bad Batch — an ambitious, expansive dystopian sci-fi western which features partying, drugs, and cannibals — might come as music to the ears of diehard fans of films like Spring Breakers and Gummo (a kid doesn’t quite eat spaghetti in a bathtub, but a kid does eat spaghetti after being in a bathtub). However, beneath its dazzlingly hip surface the script and characters leave much to be desired. It’s like taking a trip to Burning Man: a pseudo-spiritual, uniquely punky experience perhaps, but one that’s full of annoying rich kids and ultimately emotionally shallow.

Model turned actress Suki Waterhouse plays Samantha, a tough girl from Texas clad in sweet cut-off denims (that’s basically everything we have to go on) who we first meet at the entrance of a fenced-off wasteland. She’s “Bad Batch” we’re told, a group of people who have been discarded by the government due to a lack of wealth or, perhaps, for just being a degenerate — again, it’s hard to say. She’s soon captured by a pack of cannibals who we later find out are led by Jason Momoa’s Joe. Samantha breaks free — minus one arm and one leg — and makes her way to a safe haven called Comfort.

Vice Films distributed Amirpour’s debut A Girl Walks Home Alone at Night after strong buzz from Sundance and, following that film’s success, chose to team up with Megan Ellison’s Annapurna Pictures as executive producers on this project. We can rest assured that the influence of Shane Smith & co. was purely financial (she’s hardly a director to be pushed around) but it’s difficult to shake the impression that a lot of The Bad Batch was cooked up in some lab beneath that much-maligned media conglomerate’s headquarters, the same one that could have produced Die Antwoord, perhaps, or the music videos of Romain Gavras.

Comfort is a skin-crawling hipster paradise, the kind to make you break out in hives, where people seem to just skateboard around eating noodles all day, taking drugs, and partying. Are those two dogs having sex? Are those pregnant women carrying automatic rifles? Is that old Mexican man doing a Rubik’s Cube? You know it, man. Amirpour asks the audience to take all this with many a grain of salt. How are they powering these parties? Where are all these noodles coming from? Who built that skate park? Indeed, little is explained.

This oasis is operated by an enigmatic ringleader named Rockwell (played by Keanu Reeves and dressed as if Elvis was one of the droogs in A Clockwork Orange) who — similar to Mad Max’s Immortan Joe — keeps the people of Comfort sedated with drugs while cherry-picking and impregnating all the young and beautiful women on offer. Samantha ends up with a young girl as her sidekick when, one day out wandering, she shoots and kills one of her previous captors. As it turns out, the girl is the one valuable possession of cannibal Joe. So when the towering Cuban finds Samantha adrift in the dessert after a cringe-inducing faux-ayahuasca trip, he decides to take her hostage until she helps him find his daughter.

It’s here that The Bad Batch finally begins to bubble with real chemistry and drama. Up to this point, Amirpour’s film, while an aesthetic marvel, had been burning surprisingly slow — we don’t hear a clear line of dialogue for the first 20 minutes and the opening piece of action comes almost a full hour after. This is not to say that the pacing has been off thus far, but it might further explain the film’s devil may care tone. The Bad Batch could almost work as a silent picture (I wager there is less than 100 lines of dialogue in total) and therein, perhaps, lays the problem.  The film’s two stand-out scenes are the only two with real chunks of dialogue. Amirpour’s script is excellent on both counts, but viewers will be left wanting more.

There’s a reason people were quick to call Amirpour the new Tarantino. These stand-alone scenes are decorated with the same brand of geeky, charming, slightly self-conscious banter. What’s more — and in very Q.T. fashion — the director also manages to write nuanced, fresh roles for two oft-pigeon-holed actors: Reeves is revelatory as Rockwell, and Jim Carrey offers a masterclass in subtle physical comedy as a mute homeless wanderer. The director’s use of music has the same counterpointed Tarantino-esque quality that we saw in her first feature and the direction, imagery (working again with cinematographer Lyle Vincent), and mood feel fresh throughout.

Indeed, there is a great deal to savor here and yet it’s hard to shake the sense that The Bad Batch is a film stuck in neutral. We await that kick into a higher gear but it’s just too cool to be bothered. It’s safe to assume that this vibrant, young director, bursting with ideas, will only get stronger from here, but for now we can only pick over what will hopefully later be seen as a transitional career offering, albeit one that is more than worth a watch.

The Bad Batch premiered at the 2016 Venice Film Festival and will be released on June 23.