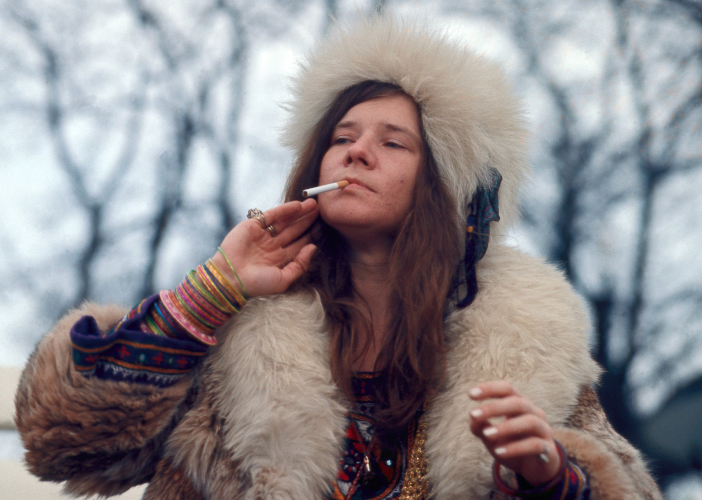 A chance oddity has occurred in the great European festivals this year. With no clear discernable connection between them, biopics of arguably the three most famous members of the infamous 27 Club have coincidentally surfaced in Berlin, Cannes and now Venice consecutively. Bret Morgen took Kurt Cobain to the German capitol with Montage of Heck; Asif Kapadia brought Amy Winehouse to the south of France; and now acclaimed documentary maker Amy Berg brings her study of Janis Joplin to the Lido. Janis screens in the documentary-heavy Out of Competition selection and, as far as these things go, it’s a fairly generic depiction. Meteoric rise? Check. Seminal tunes? Check. Tragic fall? Check. But hey, if it ain’t broke, don’t fix it.

After a brief wink to her fateful 27th birthday, we are introduced to the early years. Berg presents these through post-war suburban America family photos and guitar plucky folk music. We meet an outcast kid, desperate to get out of conservative Texas and find a place where she can fit in. She settles first for the more liberal surroundings of Austin, where her voice first flourishes. But it’s not until she finds her way to San Francisco — smack bang in the middle of the 1960s — that her star begins to rise. She sings with blues musicians in bars and cafes and gets accepted — for the fist time in her life — into a thriving scene.

She also gets a taste for the substances of SF. Namely booze, weed, rock ‘n’ roll, Otis Reading and LSD. Her friends chip in to send her back home after a particularly debauch weekend but she is coaxed into coming back to San Francisco once again by a rising band manager called Chet Helms. Helms asks if she would sing vocals for a new band called The Big Brother Holding Company. He also demands that Joplin ask her parents before leaving. She tells them she’s heading to Austin for the weekend. The rest, as they say, is yada yada yada.

Fame rears its seductive head for the first time in a period bookended by appearances at Woodstock and, firstly, Monterey Pop in 1967. Both legendary festivals were filmed for feature documentaries (by Michael Wadleigh and D.A. Pennebaker, respectively) so there’s no shortage of footage for Berg to play with. Both performances are astonishing. Joplin seems to harness the power, if not the control, of Aretha Franklin and elevates it with a sort of feral, desperate but altogether vital energy. Rarely in the world of music documentary do we see footage of a performer so in-the-moment.

There are a number of recordings throughout the film that send a shiver down the spine (the early blues rarities are a particular treat) but it’s in these years between 1967-69 that we get Summertime and Piece of My Heart. Berg, thankfully forsaking the tired imagery of newspaper clippings of the billboard charts, presents both with simplicity and remarkable restraint. You could feel a palpable friction in Venice’s Sala Perla theatre when both rang out. The latter will surely be the soundtrack of the week.

Credit to the director, Joplin’s latter years are handled with a tremendous degree of delicacy. Neither drugs nor death are exploited for cheap emotional response. The tragedy is laid out evidently and clear. Up until this point you could have played Janis and Kapadia’s Amy side-by-side and found little narrative difference. Fame took its pound of flesh from Joplin of course, but the two women lived in very different worlds. Free from any sort of comparable media attention, Janis enjoys a trip to Rio to get clean. She succeeds for the time being, even finding a lover, and generally looks to be managing quite well. She breaks from the band and finds a new creative freedom. Of course the whims of the gods can be brutal, as we soon learn.

Safe to say there’s no molds being broken here, but Berg tells the great musician’s tragic tale with a steady hand, fine admiration and noticeable care. You leave the theatre scratching your head at what exactly went wrong, and with a few stone cold classics in your head.

Janis screened at the Venice Film Festival and opens on November 27th.