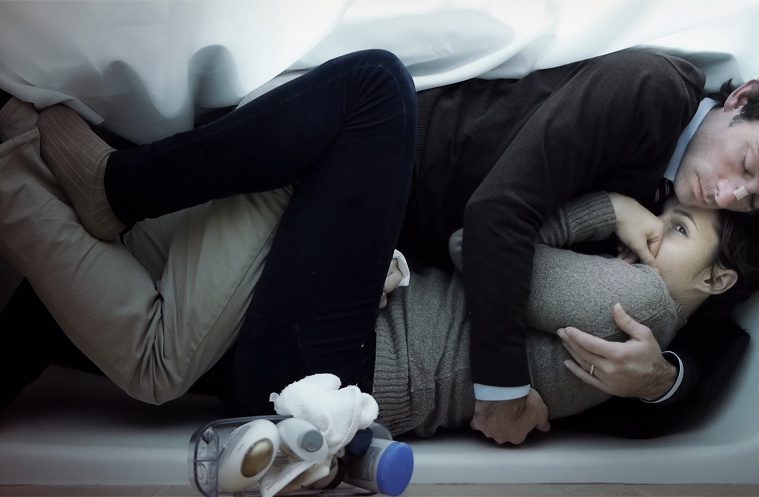 Untangling and Understanding the Narrative of ‘Upstream Color’

Given the amount of secrecy surrounding the plot of Upstream Color, it is easy to imagine that a wide sampling of its perspective audience may be put off by the thought of approaching it. After all, writer/director/composer/co-star/co-editor Shane Carruth’s previous feature was Primer, a movie that dared to treat the logical and logistical complexities of time travel as immutable and worthy of examination. So when word came out that Upstream Color would have to do with mind-controlling organisms and love and the concepts of self and personal agency, who could blame certain people for going a bit overboard in their speculation and inspection over the film?

Well, for one, I could. See, as interesting and emotionally and thematically deep as the film is, the truth is that, narratively, it is pretty straight forward. You and your friends could spend days haggling over what Carruth meant to say about the human condition, the nature of love, or what makes someone who they are, but the one thing that could keep someone from reaching those more cerebral levels of enjoyment is if they got hung up on the fact that the film is almost one hundred percent montage, devoid of set pieces or traditional “scenes.”

I know, I know. That makes it sound even worse, but I’m here to tell you that for anyone who is willing to exercise the patience and curiosity, Upstream Color will become one of the most defined and immersive features you are bound to see this year.

Still, to help anyone who still feels a bit of trepidation at the thought of approaching this film – or whose mind is still spinning from what they saw – here’s a breakdown of the plot and themes of the movie that should help to make things clear. So, obviously, SPOILER ALERT.

Construction of the narrative

Without getting into anything specific, I fear that many people will be initially knocked off balance by the free-flowing nature of the narrative. Carruth and co-editor David Lowery don’t construct Upstream Color in the way of a typical Hollywood film. There is no such thing as a scene or an act in Upstream Color. The film is very much a kind of musical composition or a symphony of images and sounds that coalesces into a story. Odd as it may seem, however, this does not make the movie more difficult to understand. Rather, it creates a constant sense of motion that enhances the narrative and makes it easier to engage with.

Picture the film like a river that one floats down while taking in the surrounding landscapes. You don’t fight the current or attempt to tread water to remain in one place. Let the current take you and you’ll be much more likely to see things than if you spent all your energy fighting it.

Ok, so that’s your advice for approaching the film. Now, let’s get into what just happened:

We begin with a pretty ingenious series of scenes that sets up the rules and mechanics of the plot. A man – the Thief – searches for elements and compounds and worms in a special kind of blue orchid at a nursery. Meanwhile, some inquisitive kids use these creatures to play a game wherein one person is forced to follow the lead of the other. Thus, a brief time later in the film, when Kris (Amy Seimetz) is abducted and implanted with one of these worms by the Thief, we know immediately that the creature has the ability to control her.

Not only that, but we also know from the first scene that this act has been done before, as evidenced through the recurrence of the motif of paper-chains, which we now see are made of papers on which Henry David Thoreau‘s “Walden” has been reprinted by hand. We watch as Kris is hypnotized/subjugated and made to liquidate all of her accounts in a manner which we can thus infer has been repeated many time before with other people.

Even after the Thief has left, Kris is still held under the sway of the worm. That is, until the Sampler uses his music to draw Kris to his mobile medical lab in the middle of nowhere, where he extracts the worm from her and places it into a live pig. Kris then awakes in her car on the side of the road, her life in shambles, with no recollection of what happened.

From here, the story proper can begin.

One of the more abstract, and thus more baffling, elements of Upstream Color is the place of the Sampler, played by Andrew Sensenig. He removes the worms from the victims of the Thief, who seems content to just leave people infested. This would make him seem to be a kind of hero, except for the fact that he is placing these worms into pigs and keeping them in a massive pen.

Well, we come to find that he is a music producer, taking the sounds of the real world and mixing them to create bold new compositions. With the worms inside the pigs, he can move among the hordes and sample the emotional experiences of the people he has de-wormed. Thus, he can make use of his horde as a kind of inspiring cross-section of humanity – and instant jolt of inspiration. Voyuerism aside, this wouldn’t seem to be so malicious of an act. That is, unless the actions of the pigs began to influence the former victims of the parasite…

Following her recovery, Kris is courted by Jeff, and their relationship forms the core of the narrative of the later two-thirds of Upstream Color. Jeff has also been made a victim of the Thief, and through their shared loss of agency Kris and Jeff grow closer and more in love.

The weird thing is, as Jeff and Kris begin to grow their relationship, their respective pigs likewise pair off and begin to form an attachment to one another. This raises the interesting question – which party in this weirdly symbiotic relationship is really in control? Not only that, but as they grow closer, Kris and Jeff seem to begin swapping memories, though not in the cute way in which one partner will sometimes insert themselves into a story oft repeated by their significant other. No, in this iteration, Kris and Jeff seem to simply be merging identities, again possibly as a side effect of their joint infection.

Jeff retains his composure the most during the bulk of the film, only because the biological connection between him and his pig is uncomplicated by any other processes. Kris, however, has to deal with the phantom fear and anger that goes along with losing one’s children, even though she herself has been left barren by the invasive parasite.

So by now we know that the pigs are obviously serving as a kind of psychic conduit for the Sampler. What we find out now, however, is that the pigs are both affecting and being affected by the humans who formerly had their parasites. So when Kris’s pig gets pregnant, Kris experiences all of the psychological and physiological side effects of that pregnancy.

This leads to a massive psychic unraveling once the Sampler, who has no use for the non-infected piglets, decides to get rid of the offspring. As he restrains the “Jeff” and “Kris” pigs so that he might throw their piglets into a sack, actual Jeff and Kris experience the emotional turmoil of two frightened animals. They are slaves to the emotions of another being, reacting without knowing why, once again devoid of agency.

But something else is at work now, and by acting as a kind of mutual support system, they are able to begin unravelling the mystery of what happened to them in the past, and what is happening now.

Unfortunately, this is too late to save that sack of piglets…

Here all of the threads wind together. The Sampler tosses the sack of piglets into the river, where the young animals drown. On the banks of the river grow white orchids, and when the piglets are caught on the roots of a tree and begin to decompose they release a blue material into the water.

All the while we see Kris and Jeff trying to understand the things happening to them. Slowly they begin to pick up on certain elements of their affliction. They find the production house of the Sampler, and begin finding his music. They unwrap the significant of “Walden,” which they discover through Kris’s reversion to her most basic “imprinted” state in the wake of her psychic trauma.

As the pigs continue to decompose, the orchids on the shore turn blue, the same blue as the substance released by the rotting pigs. A pair of hikers come to the forest and collect the flowers, transplanting them into plastic pots marked with the same nursery sticker as the orchids we previously saw the Thief scouring.

Thus, we come to understand the triangle, and the perpetuating cycle of trauma and exploitation that has been working for God knows how long…

The Breaking of the Cycle

Armed with the knowledge of what has been happening to them, Kris and Jeff take action. In a lyrical and tense series of scenes, we see Jeff luring the Sampler into his head space. Kris, meanwhile, takes advantage of the Sampler’s reverie to get the drop on him, shooting him down in the pig pen.

Further investigation brings to light that many more people who have been suffering silently from almost uncontrollable emotional and psychic trauma have been made victim of this man. Kris and Jeff take it upon themselves to correct this wrong by cluing everyone in to the terrible things that have been done to them, bringing together a community of former victims to nurture and care for the pigs, creating in the animals a sense of calm and ease that allows the humans to regain a modicum of control over themselves once again.

But what does it all mean?

The purpose of this article isn’t really to paint a giant sign pointing to the meaning behind everything that occurred. Sure, we can draw conclusions from the recurring symbols and totems throughout the movie, but these things (the use of “Walden,” with it’s transcendentalist themes, the symbolic meaning of pigs, the questionable “victory” of killing the Sampler, etc.) are not subject to the same kind of strict interpretation as the plot. The idea that these cerebral aspects of the film can or should be pinned with a single meaning is preposterous.

However, it seemed important to me to get down onto paper what happened in certainty so that the real conversation about the meaning behind these acts and items could begin. In the end, a movie is what you bring to it, and how it makes you feel. Understanding the mechanics of a story on the basic, narrative level will help us to discuss the ways in which these interactions and plot points affect the wider themes of love, agency, and the perpetuation of sometimes damaging cycles.

Upstream Color is now expanding in limited release and will hit VOD/Blu-ray next month.

What are your theories regarding the plot of Upstream Color? Share your thoughts below.