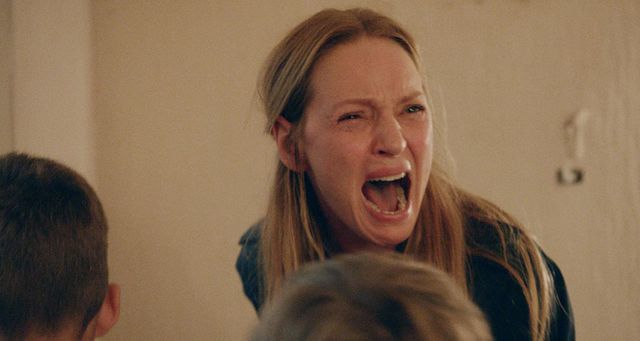 Even if you didn’t see Lars von Trier‘s 241-minute (or 325-minute) two-part Nymphomaniac, there’s a strong chance you witnessed at least part of Uma Thurman‘s performance (courtesy of the above still or the below clip) in the film’s most beautifully awkward scene, surrounding a “whoring bed.” She’ll now get her chance to re-enter the world of Lars von Trier as she’s joined his serial killer drama The House That Jack Built.

As reported by Zentropa, Siobhan Fallon Hogan (Dancer in the Dark, Dogville) will also be re-teaming with von Trier, with both actors playing women who come across the violent path of the lead. Spanning 12 years and following Matt Dillon in the lead role as we see his character’s presumably brutal murders, the film also stars Bruno Ganz, Riley Keough, and Sofia Grabol. The film will be split into “five incidents” (aka the murders) and then the “digressions” in between, as Jack attempts to create the “ultimate artwork” in his vocation.

“With these two fantastic actresses, the main cast is now in place, and we are ready to shoot – and kill…,” says producer Louise Vesth. “Uma and Lars first worked together on Nymphomaniac and complimented each other in an exceptional way; I can’t wait to see which character they’ll create together this time. Lars has had Siobhan in mind from a very early stage for one of the female parts, and it is an honor for us to welcome her back on set since her appearance in Dogville and Dancer in the Dark.”

THE HOUSE THAT JACK BUILT takes place in 1970s USA. We follow the highly intelligent Jack through 5 incidents and are introduced to the murders that define Jack’s development as a serial killer. We experience the story from Jack’s point of view. He views each murder as an artwork in itself, even though his dysfunction gives him problems in the outside world. Despite the fact that the final and inevitable police intervention is drawing ever near (which both provokes and puts pressure on Jack) he is – contrary to all logic – set on taking greater and greater chances.

Along the way we experience Jack’s descriptions of his personal condition, problems and thoughts through a recurring conversation with the unknown Verge – a grotesque mixture of sophistry mixed with an almost childlike self-pity and in-depth explanations of, for Jack, dangerous and difficult manoeuvres.

The House That Jack Built, which is inspired by Trump, according to von Trier, will premiere 2018.