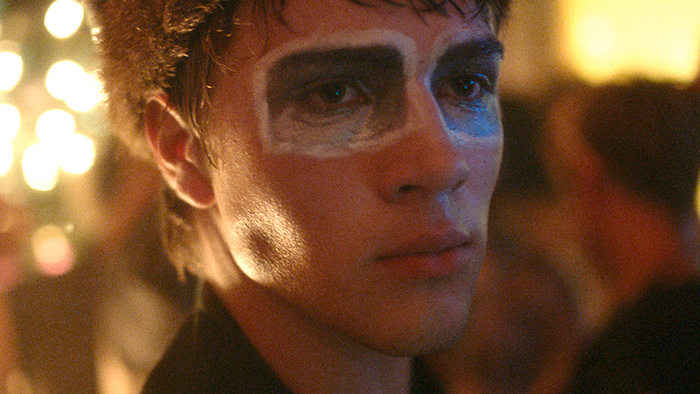 After a collection of shorts, Stephen Dunn is making his directorial debut with a coming-of-age tale following a boy named Oscar (Connor Jessup, reoccurring player in this year’s TV series American Crime) that looks equal parts psychedelic and grounded, sensual and violent. The first trailer for Closet Monster, which is also penned by Dunn, showcases the collection of awards the film has received including Best Canadian Feature at TIFF, Best Feature at the 2016 Melbourne Queer Film Fest, and a Jury Prize at Marrakech International Film Festival, among others.

The trailer also hints at small moments of comedy mixed with sweaty drama, tension, and potential violence that makes you consider both words in its title. Dunn is being compared to both David Cronenberg and Xavier Dolan, with a distinct voice of his own. We said in our review: “Dunn’s maneuvering from light touches to blinding violence is bold and necessary to really dig deeper into Oscar’s psyche. Jessup plays the frustration and insecurity perfectly, his expressions nuanced yet easily discernable from optimistic joy when creating art and aggressive uncertainty when faced with reconciling his needs with his fears … His trajectory might be obvious and on a well-tread path, but the way it unfolds is wholly unique in its theatrical language.”

Take a first look at the trailer, along with a poster below.

A fresh take on the coming-of-age story, this surreal tale follows the artistically driven Oscar (AMERICAN CRIME’s Connor Jessup) hovering on the brink of adulthood. Struggling to find his place in the world after a rough childhood and haunted by images of a tragic incident, Oscar dreams of escaping his small town. After he meets a mysterious and attractive new co-worker, Oscar follows the guidance of his pet hamster Buffy (voiced by Isabella Rossellini) and faces his demons to find the life he wants.