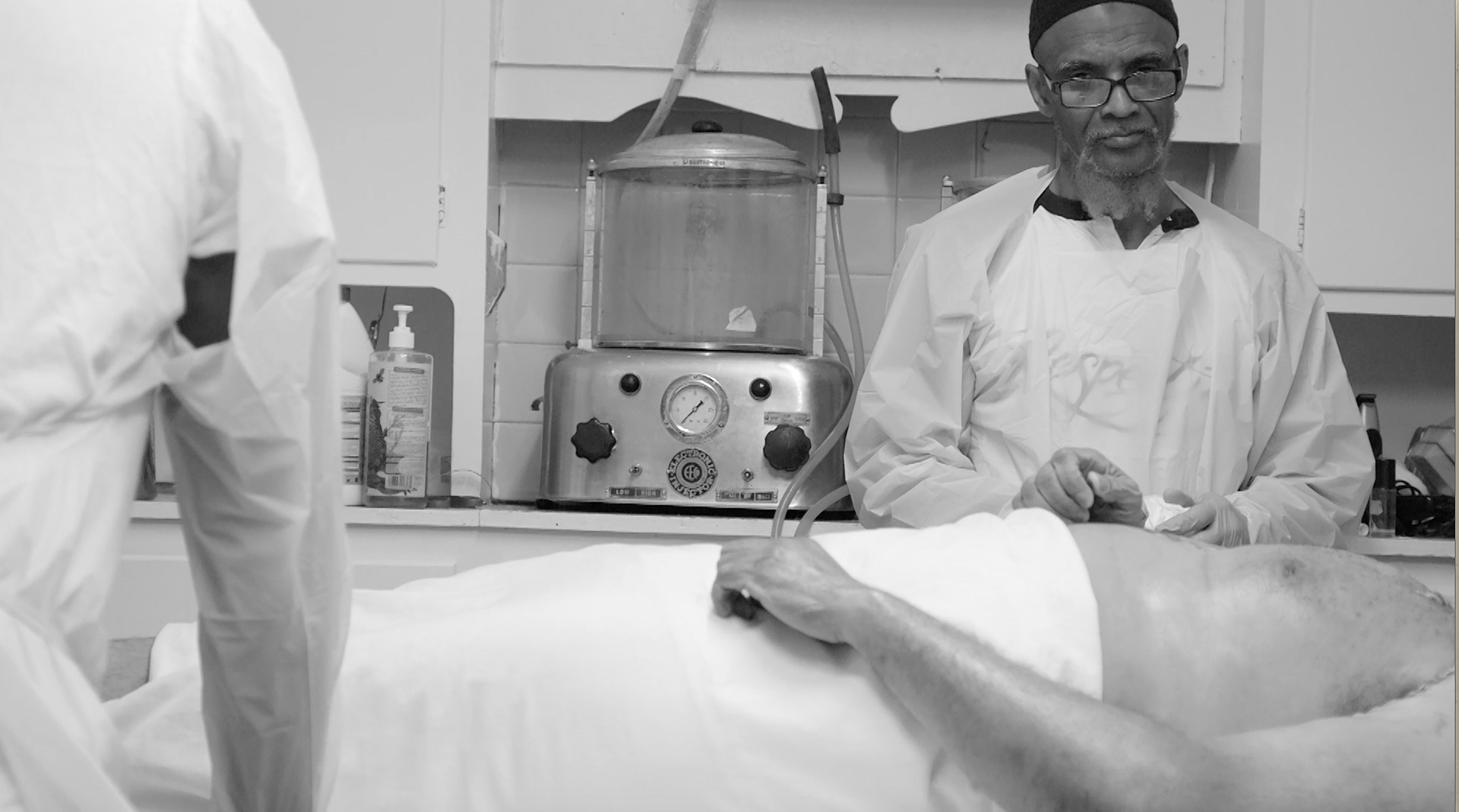 Some are lucky enough to escape their circumstances. Others learn from those circumstances and discover ways to transform them and themselves in order to move forward and leave them behind. And then there are those whose circumstances defeat them whether or not they actively participate in that self-destruction or not. These are the three choices one has when confronted with the struggles of poverty, systemic racism, violence, and the psychological duress experienced as a result. Hanif Muhammad knows it all too well as an older man who went through the prison system, changed his life thanks in part to Islam, and survives as a Muslim mortician despite a never-ending temptation to backslide. He suffered the consequences of his circumstances and rose above. Now he aspires to teach others to do the same.

Zeshawn Ali’s documentary Two Gods isn’t about an infallible hero, though. Real heroes are always one misstep away from being the cautionary tale they hope to prevent others from becoming. That’s why Hanif’s story is worth telling. That he can flirt with relapse, hit emotional brick walls that would defeat the best of us, and still look beyond today to realize the value of his life and that of those battling alongside him regardless of age, potential, or opportunity is why he’s an inspiration. He tries his best, stumbles, and ultimately gets back up to try again. He speaks his truth to the boys he mentors (twelve-year-old Furquan Maynard and eighteen-year-old Nazir Powell) knowing how impactful seemingly innocuous activities are to heading down the wrong path.

How will Hanif react when troubles arise? How will he help Furquan when the abuse suffered at the hand of his mother’s boyfriend spirals out of control? What wisdom does he impart to Naz when the law comes knocking with the increased frequency a young adult with a record and thus a reputation attracts despite the man he might still have time to become? It’s tough because Hanif is now the respected father figure in these boys’ lives. If they falter, he must wonder to himself about whether he failed them somehow. Did he not do enough? Did he do something wrong? As those questions swirl in his mind, his strength to avoid temptation diminishes. The life he’s built from the ashes of the past risks crumbling apart.

It’s a good life too. With the help of his own friend and mentor, Hanif has focused his energy away from crime and towards God without relinquishing the Newark streets that will forever be a part of his DNA. Rather than be on the side of those black, Muslim men who find that they need a coffin well before their time, he’s taken residence on the side of those black, Muslim men who provide those coffins and ensure that each body—no matter his/her sins—is treated with the respect he/she deserves. As someone who had the chance to repent and subsequently strive to ameliorate his soul in life, there’s no better way to fulfill that promise to Allah than by facilitating the dead’s chances once they cannot.

Hanif has as much to be happy about (Furguan may earn the ability to get out and be more than his present situation allows) as he does to be depressed (Naz can only overcome the criminal image projected upon him for so long before embracing it and finding himself behind bars for a crime more serious than car theft). We watch birthday celebrations with metaphorical confections (one cake breaks before being put back together while another is melted with little hope of salvation like the people they honor), witness Hanif’s desire to open young Muslim boys’ eyes to death by bringing them in to help wash bodies and build coffins, and appreciate how the powerful rebirth from a second chance doesn’t guarantee another won’t be necessary.

Unlike the film’s aesthetic, these things aren’t black and white. You don’t simply wake up a different person. It’s something you must tirelessly work on for the rest of your life with the help of loved ones willing to stand by you through thick and thin. And you need consistency no matter what your journey towards betterment entails. Maybe it’s a career (the pine boxes and janazah rituals have become Hanif’s identity) or maybe it’s a friendship (he refuses to stop being there for Furquan and Naz even when he can’t supportively hug them). You can’t beat yourself up when things go wrong because giving up inevitably means more will. You can’t change those who aren’t willing to change themselves, but you can stay ready for when they do.

Two Gods was selected for the Full Frame Documentary Film Festival and will receive its world premiere as part of Hot Docs’ online festival starting May 28.