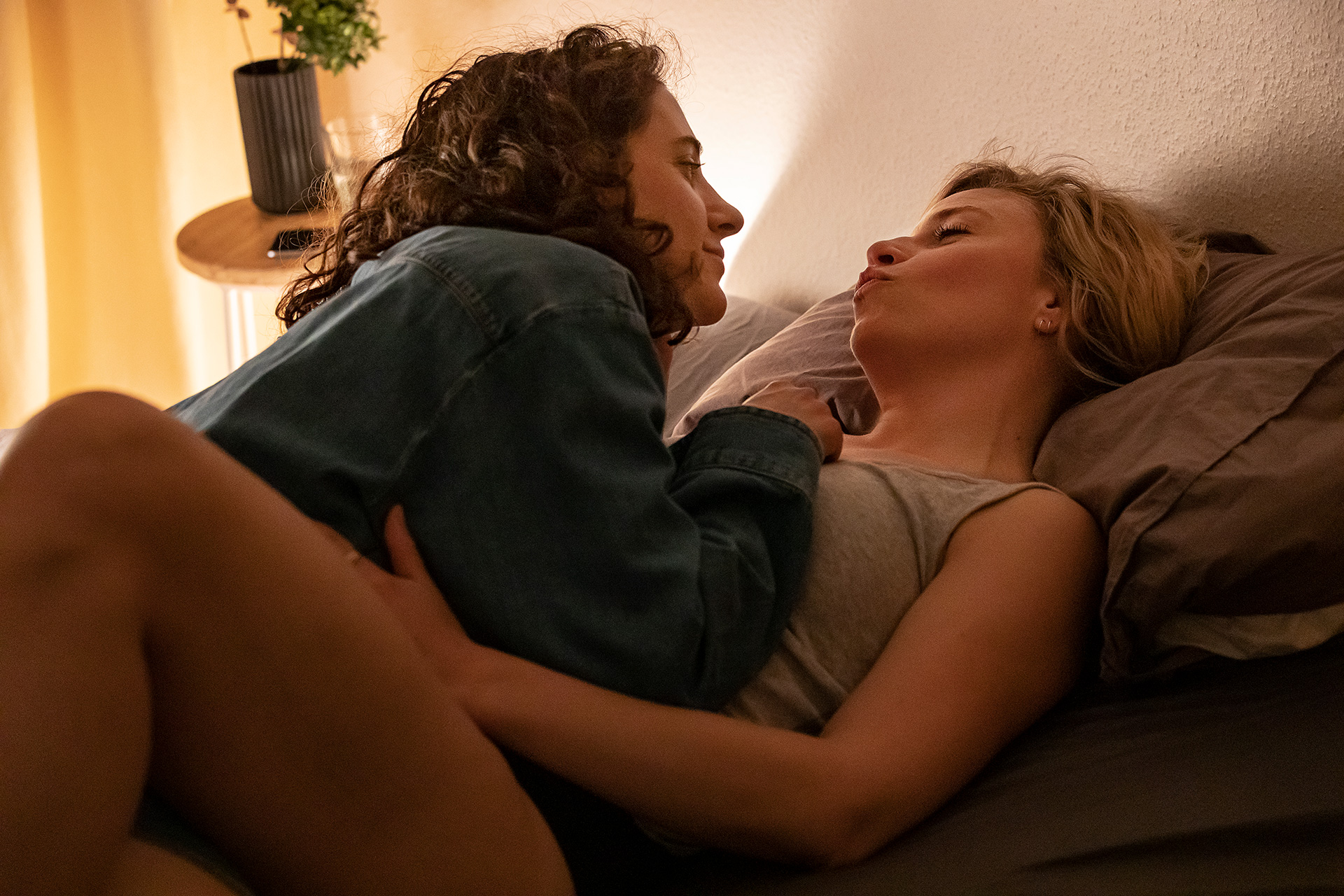 Leah’s (Ellie Kendrick) reasons for being in Denmark are purely academic. At least, that’s what she tells former actress Maja (Josephine Park) upon meeting by accident at a bookshop. It’s a cutely fateful collision, the former with a stack of research and the latter dressed as an elf while running to an engagement to read to a bunch of school children. Maja’s haste causes a mix-up in their attempt to pick everything up, ensuring they must come together once more in calmer circumstances. A mug of tea and conversation later has Leah waking up in the Dane’s bed, a day away from catching her flight back to London. Her decision to stay might not reveal this trip was also a chance for escape. Ignoring her mother’s calls does.

Writer-director Gabriel Bier Gislason will show us as his feature debut Attachment progresses a couple more days. Leah still won’t answer her phone, but her demeanor shifts drastically. She becomes despondent. She mumbles and walks in her sleep. The smile that touched Maja’s heart is gone. It’s the seizure that ultimately forces their hands, though. Unsure of what to do—Leah didn’t bring up the potential of an attack due to not having experienced one since she was a child—Maja grabs her legs the moment a convulsion also strikes, snapping her knee. And while she laughs about how her mother (Sofie Gråbøl’s Chana) would believe it was God’s way of saying it’s time to return, Leah agrees home would be a comfort. Maja comes too.

Home is an Orthodox Jewish community. Leah isn’t devout, despite studying her faith and says her mother isn’t either, but appearances quickly prove otherwise. Chana’s ex-husband was the religious zealot. He is the reason this is where they started their family and she tried hard to fit in, taking up his mantle, so to speak, when he ran off. And even though she speaks Yiddish and has made herself a member of this neighborhood, Leah senses an abrasiveness she believes is them feeling pity rather than equality. Partly because she pities her mother too; also from the conflict that always seems present between Chana and Uncle Lev (David Dencik). So, Leah lives in the flat above to watch her mother—as she watches back.

Maja is thus a perfect conduit for us to enter this world as a foreigner unversed in Judaism, to the point of stumbling into Lev’s bookshop in hopes of finding the equivalent to “Jewish for Dummies.” And there’s plenty to question. Chana asks that they wear amulets of amethyst. There is salt in room corners, scrolls tucked away into walls, and porcelain bowls with hand-drawn pictures Maja doesn’t understand. How Chana acts with her daughter is nothing short of domineering—something Leah and Maja can laugh about at first, then grow more frustrated as it progresses. The real worry, however, is what happens at night as the former sleeps. Maja hears footsteps, finds a lit candle, and discovers it impossible to wake Leah for corroboration.

It’s both the sort of dread-inducing mystery we welcome from horror and the kind of severely dark potential primed to be skewered with humor. Dencik, the glorious straight man to Mads Mikkelsen’s zanier foil in Men & Chicken, is up to the task. His deadpan delivery when trying to teach Maja about golems and dybbuks is great. She tries to joke that the latter are just “ghosts” to which he’s genuinely taken aback by the implication. We infer why quite easily (something sinister is afoot), but it’s fun to let the charade play out. His Lev is as warmly hospitable as Chana is not and their respective impact on Maja is crucial to her inevitable missteps when attempting to traverse a minefield nobody is willing to fully explain.

Because she’s the lead here. Maja is caught, much like us, with only superficial truths that she can’t help but jump to conclusions about. Her love for Leah demands she act, and Chana and Lev’s cryptic battle forces her to mistrust any action they take to counter hers. The house is thus simultaneously a prison and sanctuary. Leah’s seizure becomes a sign that she had both been gone too long and just long enough to break whatever hold her mother has. There’s a lot to therefore consider in the background, but Gislason does well keeping it all cloudy enough for us to focus solely on Leah’s wellbeing. Its noise points to Chana being the problem and Maja reacts accordingly with her own secretive performance to secure safety.

Except “safety” is often in the eye of the beholder. At some point that which was blurred in the background must rise to the surface for a climactic revelation that’s able to finally highlight motives above assumptions. It’s here where Attachment shines, bringing meaning and emotion to that we knew was incomplete. But I’m not talking about a twist. Gislason isn’t wielding gimmicks as much as slowly peeling back the layers he’s built upon an ancient truth those involved were too scared to confront. What seemed like punishment was in fact love; the reasons it had to stay hidden prove even more tragic through their sacrifices. While easy to laugh at overbearing parents, regardless of their reasons, never discount the passion that ultimately drives them.

Don’t expect anything crazy on the supernatural front, however. Attachment grounds itself with how dybbuks and the like would appear in our reality. Thus it’s all performance-driven, Gråbøl and Kendrick going hard to present the gradual proliferation and cessation of an unwanted demonic presence. That subtlety allows Park the room to overreact towards and / or ignore the signs. It lets her Maja jump to conclusions that risk her relationship before ultimately hatching a plan to save it without fully being aware that doing so might destroy Leah in the process. There’s a lesson here about our keeping secrets for someone else’s “own good.” It’s only ever actually about the good of the secret-keeper who’s too afraid of the truth’s inherent consequences.

Attachment makes its international premiere at the 2022 Tribeca Film Festival and will be released by Shudder.