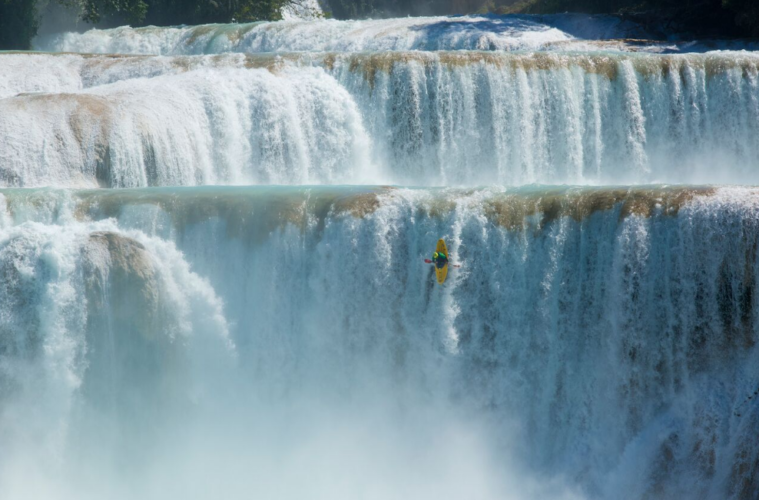 Chasing Niagara, the directorial debut of whitewater kayaker Rush Sturges, has been treated with its first trailer. The film documents daredevil Rafa Ortiz as he attempts to kayak Niagara Falls. To do so, he has to assemble a collection of big waterfall kayaking cohorts who are willing to risk it all in the thundering waters.

The trailer feature breathtaking, slow-motion wide shots of kayakers descending massive waterfalls combined with GoPro footage of their drops. It also hints at aspects of danger and espionage in their journey as the team has to carefully plan their illegal feat. “We have to plan it like a diamond heist,” one of them states. Despite these aspects, the trailer suggests that beyond these thrills there lies a connection between man and nature that is at the heart of the film.

Check out the heart-pumping and inspiring trailer, along with a poster, below.

CHASING  NIAGARA  follows  Rafa  Ortiz, a  celebrated  pioneer  of  big  waterfall  kayaking,  as  he  pushes  himself to  the  limit  and  redefines  his  sport  by  daring  to dream  the  impossible  – successfully  descending  Niagara Falls.  To  prepare  for  this  highly  dangerous  drop,  Ortiz  enlists a  team  of  fellow  professional kayakers,  including  Rush  Sturges,  Evan  Garcia,  and  Tyler  Bradt,  to  help  him  train  and document  the process. As  they  take  on  lightning  fast  rapids  and  massive  waterfalls  in  exotic  locales,  they  soon  find that what  started  as  one  man’s  epic  quest, evolves  into  an  intense  three­‐year  journey  of  self-discovery  and friendship  that  forces  them  to  redefine  their  own  definitions  of  bravery,  purpose, and ambition.

Chasing Niagra is set for U.S. release this July in theaters and on demand.