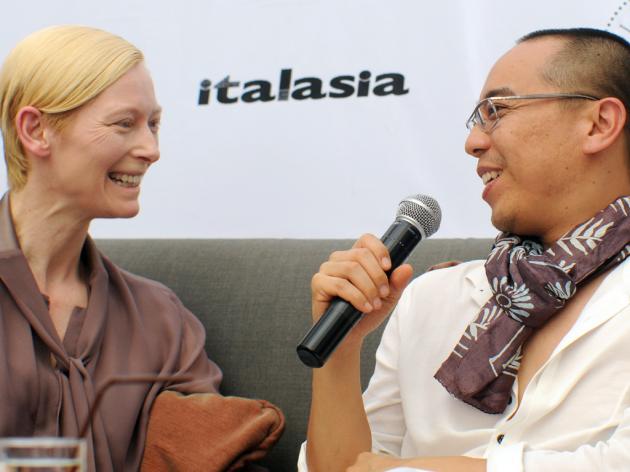 Having worked with Derek Jarman, Wes Anderson, Sally Potter, Luca Guadagnino, Bong Joon-ho, David Fincher, Lynne Ramsay, the Coens, and the list goes on, Tilda Swinton has better taste than just about any other actor. Her next role, however, is certainly the ultimate union of international cinema greats. It’s been revealed that she will star in the new film from Thai master Apichatpong Weerasethakul.

Titled Memoria, it will mark the Palme d’Or-winning director’s first film shot outside Thailand, with a 2019 production planned in Colombia. “During the 70s and 80s, it was very violent [in Colombia], much more than now… when you were driving, there could be a bomb and sometimes the traffic stops and you don’t know [why],” the director told Screen Daily. “People imagine things and have a fear. The movie is about this, waiting for something you don’t know.”

Swinton’s casting was confirmed by The Independent, who relay from Cartagena Film Festival—where the actor was being honored—that she has been talking with the director for over a decade about making a film together. After discussing a number of potential collaborations in the past years (and even teaming to curate the 2012 festival Films on the Rocks Yao Noi), their first film together is said to “explore colonial history and how collective memory can lead to fear.”

Weerasethakul has also previously noted that romanticized jungle stories set in Thailand from his childhood has inspired the film. “Colombia is an active landscape. There is a volcano, there are landslides, earthquakes, coal mining, tunnel instruction,” he said.

As we await the cinematic dream team union, which we imagine could be primed for Cannes 2020 debut, Swinton can next be seen (or rather heard) in Wes Anderson’s Isle of Dogs, followed by Luca Guadagnino’s reimagining of Suspiria. Below one can watch the Cemetery of Splendor director’s recent masterclass at International Film Festival Rotterdam where he had an exhibit featuring a fully-functioning cinema-inspired hotel.