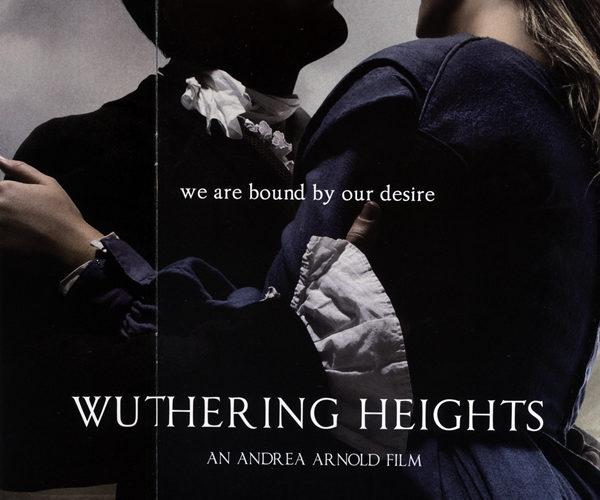 Aside from being creepily old, if the Brontë sisters were still alive today, they would be delighted. After their work has been adapted a dozen times over, two of the finest versions have arrived this year. Cary Fukunaga did wonders with Charlotte Brontë’s Jane Eyre earlier this year, and now Emily Brontë’s Wuthering Heights has received exquisite treatment from Fish Tank and Red Road director Andrea Arnold.

Under Fukunaga’s guidance, Michael Fassbender and Mia Wasikowska were expertly suited for the delivery of Charlotte Brontë’s eloquent writing. But Arnold isn’t concerned with dialogue here. In fact, there is barely any in the first 30 minutes, let alone the entire 2-plus hour run. It is incorporated when necessary, but we are instead given bits and pieces while Robbie Ryan’s cinematography stuns in their continued use of the 1.33 aspect ratio. Beginning with no title card, we are thrust into the bleak, but beautiful world meeting an older, distraught Heathcliff (James Howson). The camera racks focus (a recurring technique) from the troubled soul to the specks of dusts floating in the room as Wuthering Heights lights up the screen. Split into two distinct halves, we then begin with a younger version of our lead (Solomon Glave), adopted by a Mr. Earnshaw (Paul Hilton).

Working on his farm, he is perpetually beaten and looked down upon. Through the abuse, he falls in love with Earnshaw’s daughter Cathy (Shannon Beer) and the pair go on frequent treks through the terrain, ducking away from the family. Their young love is traded in for the practical, as Cathy meets the wealthy Edgar Linton (Jonny Powell as a young teen, while James Northcote plays the older man) and an engagement commences, causing Heathcliff to flee. Many years pass as our lead returns with new wealth and knowledge to find a married Cathy (now portrayed by Kaya Scodelario). Instantly professing his love, the path to ultimate tragedy begins. Arnold paints this world with a deft touch, crafting tightly focused close-ups to convey emotion rather than words. Establishing shots only open wide a handful of times, instead opting for a beetle crawling through the grass or a spiderweb oscillating in the cold wind. These little touches build the world more than any sort of exposition could dream to do. If Terrence Malick incorporated shaky handheld instead of smooth steadi-cam movements, I’d suspect we’d get something like this.

It is easy to get mesmerized by the style, but Arnold is also able to articulate the raw emotion in this story. While it doesn’t hit as hard as Fukunaga’s Brontë tale from earlier this year, Howson does a notable job linking his tortured past and present despair with brooding glares. The tacked-on Mumford & Sons song in the final moments only distracts, but by reinventing the mold, Arnold’s take on Wuthering Heights has set another benchmark for adapting classic literature.

Wuthering Heights is playing at the Toronto International Film Festival.