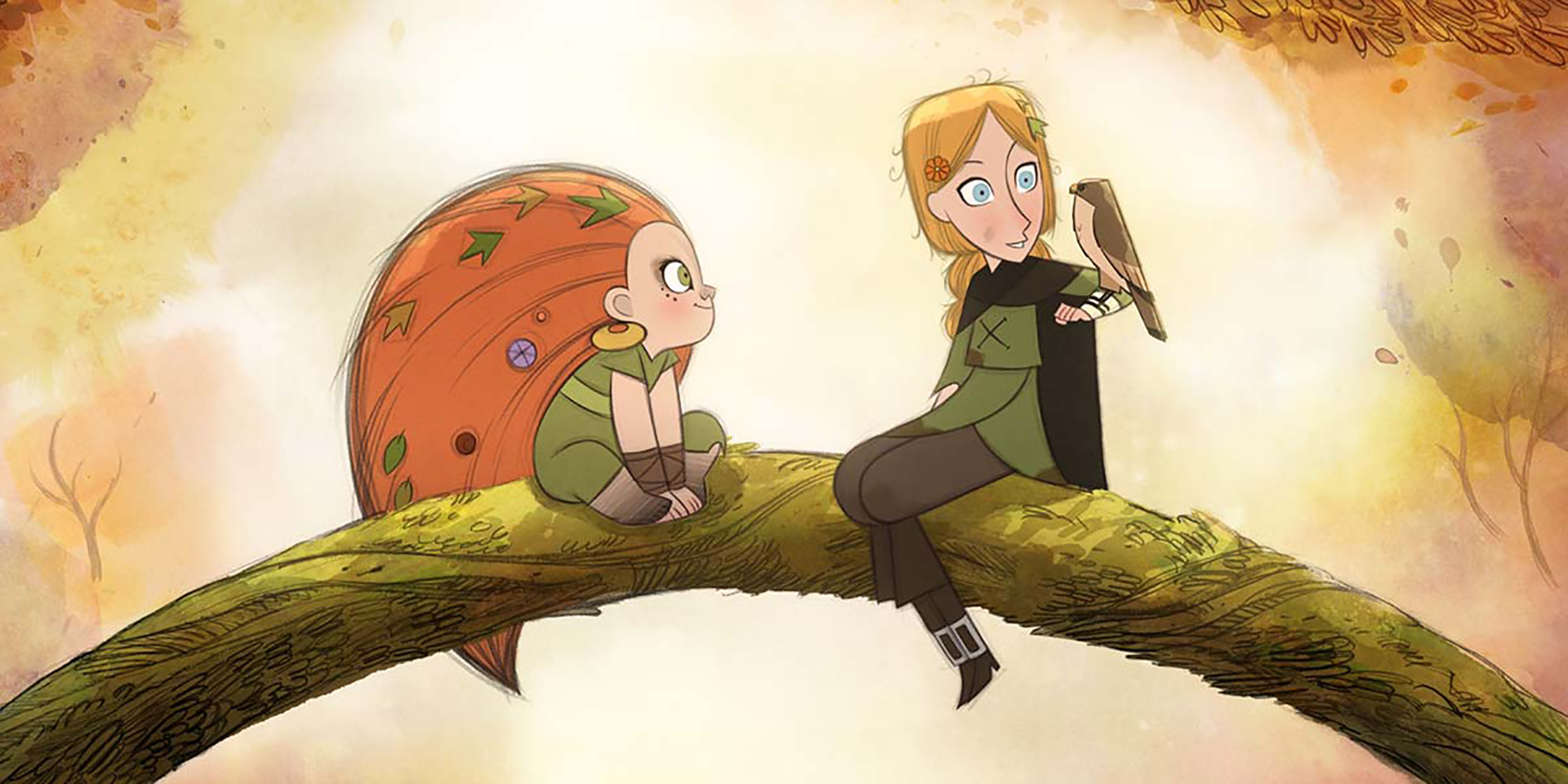 The woodsmen are clearing out the forest to expand Kilkenny, Ireland’s farmland circa 1650 under orders of Lord Protector Cromwell (Simon McBurney)—an Englishman. He and the British crown see these Irish folk as a people in need of taming so it’s only fitting that he try his hand at ridding the countryside of wolves first. This is something these peasants can get behind because they fear what those beasts might do if left unchecked. They clamor for the soldiers to protect them. They willingly invite another Englishman in Bill Goodfellowe (Sean Bean) to serve as the Lordship’s chief hunter to do the deed. And this fearmongering distracts them from realizing how Cromwell’s threat of burning the forest if he fails foreshadows how he’ll treat their non-compliance too.

Because Tomm Moore and Ross Stewart’s Wolfwalkers is a children’s film, however, such stark political commentary on behalf of screenwriter Will Collins isn’t at the forefront of the fantasy that unfolds. No, this is a fairy tale seeking to teach inclusion and compassion since all oppressed groups should be able to relate to the oppression of another. It’s a difficult prospect in many cases as nationalism and war prove strong drugs, but seeing the truth with one’s own eyes generally does the trick. So when one of those woodsmen is staring down the snout of a wolf clawing at his chest, he screams for his life. And when two feral yet beautiful creatures stop the violence to heal his wounds, he can’t help questioning everything he’s been told.

It’s the type of curiosity we see in our kids and not so much in ourselves thanks to them not yet being fully indoctrinated in whatever rules and regulations are enforced by the Lord Protectors of the world. Case in point: Bill’s young daughter Robyn (Honor Kneafsey). Her father is her hero and as such she wants to follow in his footsteps as a hunter. While they would hunt and trap in England for food, however, this relocation to Ireland positions him as a murderer doing the biddings of an impatiently narrow-minded ruler. Robyn doesn’t see that nuance. She only wants to leave the gated walls of Kilkenny and travel the forest with her father. If killing a wolf proves her mettle, that’s what she’ll do.

Robyn’s youth is therefore the only thing separating her from Bill, but it’s an incalculable difference. Because while his mind will refuse to see anything other than a beast to put down under direct orders, she will see a shimmer of light and look first. What she sees is Mebh MacTíre (Eva Whittaker), a wolfwalker from lore who presents as a girl when awake and a wolf when asleep. She and her mother Moll (Maria Doyle Kennedy) were the ones who healed that woodsman. Mebh is also the one who’s been ruining Bill’s traps. This is her forest that the humans have trespassed into and yet she and her wolves don’t want to hurt their unwelcome intruders. They simply want to scare them away and be left alone.

Like so many tales of power and greed, such a desire can only last so long if the aggressor refuses to relent. And now that Moll has gone missing (her sleeping body remains in the forest, but her wolf form has been gone for days in search of a new home), Mebh doesn’t know what to do. Luckily for her it’s Robyn who crosses into the wolf’s den and not Bill because Mebh can have some fun at her expense rather than worry about getting a bolt through the forehead. Finding common ground isn’t instant and an accidental bite does occur, but the young wolfwalker is quick to heal it and explain her plight. If Robyn will help find her mother, Cromwell can have the forest without bloodshed.

Shades of How to Train Your Dragon come out as we watch this young English girl attempt to tell her father and the town that the wolves aren’t as bad as their fear presumes. Then shades of The Legend of Zelda: Twilight Princess arrive once that bite transforms Robyn into a wolfwalker herself—trying her damnedest to escape the town with her life upon waking to find herself looking at her sleeping body as trails of colored scents and colored sound waves flow to help her stay a step ahead of danger as she seeks sanctuary. She’s suddenly more invested in saving these wolves (and herself) than ever just as Cromwell and Bill escalate their assault. Fire is surely on the horizon.

What follows is a gorgeous journey towards compassionate enlightenment on behalf of a people seeking the same for themselves. And just like Moore’s previous films The Secret of Kells and Song of the Sea, a consistently mesmerizing Celtic flavor is imbued into the animation, music, and story. He and Stewart leave in sketch lines, misalign color fields from heavy outlines, and provide a uniquely electric energy to the whole that computer animation can’t quite replicate. And the way in which they keep foreground and background in frame with an unorthodox combination of vantage points positioned upon a wave of land folding in on itself (we see characters moving in profile on the horizon beneath a sky filled by an overhead view of the distant town) is magical.

One should expect no less from Cartoon Saloon visually or narratively as they’ve forever proven to be one of the best in the business. We feel the stakes as Bill’s foot soldier blindly follows orders to survive and as Robyn brazenly rejects them to do the same. And we’re overcome by Mebh’s unbridled rage when her existence is put in peril by the violence of callous men. Outlines can’t contain the wildly chaotic and roughly drawn reds of fire or the characters’ emotions once conflicting hearts are forced to choose their side. At a certain point the difference between just and corrupt has to matter more than allegiance or love because the latter two ultimately mean nothing if they’ve formed upon the back of monstrous acts.